This is one of the most important days in the history of the transgender movement. The outcome of this case is likely to shape the future of that movement in ways that will resonate for a very long time.

The question is, Why? Why now, and why at all?

I'm speculating because I can't help myself. Speculating about the motives of the Supreme Court Justices is a parlor game, as no one has a clue. I wrote just several days ago that I didn't expect this now, or even for many years. Clearly I was wrong, but I was blindsided like everyone else.

First thing that comes to mind is why would a depleted Court take any cases, let alone a controversial social case? Clearly they don't expect to be down one for much longer, and they must believe that a Democratic Senate would go nuclear and remove the filibuster to counter John McCain's seditious words. Should Trump win, then we're all doomed, and this particular case means little. With a Clinton White House, the expectation would be Merrick Garland or, more likely, someone to his left, so taking this case would seem less threatening for the liberal wing of the Court.

The history of the modern Supreme Court teaches us that the Justices abhor involving themselves in nationally significant controversial social issues. As we've seen over the past few years, the Court prefers years of lower court decisions, years of debate in state legislatures, and, finally, a split between circuits.

The most recent example involves the LGBT community. We saw the Court wait until we had twenty years of debate on marriage equality, state laws and referenda, and 37 states with the right to marry based on federal court decisions. At that point it would have been foolish to undo it all, but even so, at the end of the day on June 26, 2015, the Court ruled for dignity only by 5-4.

Previously the Court had overturned the ban on interracial marriage in Loving v. Virginia, based on the 14th Amendment. In 1948 the California Supreme Court, in Perez v. Sharp, started the modern movement culminating with Loving, and by 1967, 14 more states had overturned their miscegenation laws, the last being Maryland.

Similarly, and possibly more relevant, is that prior to the Court's legalization of abortion in Roe v. Wade in 1973, twenty states had reformed their abortion laws, with four legalizing it. That was a significant movement, building on the feminism of the 60s, but not nearly as widespread as the legal advances in marriage equality prior to Obergefell last year.

Perhaps being immersed in the trans rights movement I can't see clearly the state of the nation on the verge of Grimm. We've made great progress in the courts, legislatures and culture, possibly sufficient to have mitigated much of the controversy and making a decision more palatable for the Court. I've been writing about this for years, in opposition to our trans and LGBT national organizations, but given the above analysis I'm still surprised the Court will not wait until a lower circuit split.

What is the situation in the lower courts? Here's a chart showing the 2012 status: 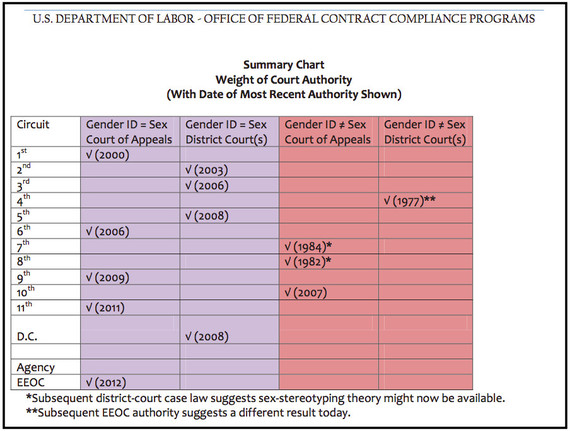 To bring this up to date, as per Jillian Weiss, Executive Director of TLDEF, the Transgender Legal Defense and Education Fund, we can move the 4th (Grimm), 8th (Hunter) and 10th (lower case interpretations of Etsitty) circuits to the yes category. That leaves only the 7th, which is about to rule in favor of covering sexual orientation under "sex" in an en banc review of the recent Hively decision.

That means almost unanimity in major court decisions this century, with only one outlier from Utah which has been reinterpreted. State courts have been supportive as well as 18 state legislatures providing comprehensive protections including public accommodations, and even Utah today with employment and housing protections.

Those courts and legislatures which have denied trans persons their rights are still mired in a traditional reading of sex, and I am confident, now that the Department of Justice has clearly and cogently promoted the modern view, supported by all American medical associations which have come out in support of trans persons, that our lawyers will make that case. It also certainly doesn't hurt that the opposition has, until recently, been spouting the most childish and hateful arguments, which have repeatedly failed to sway any judges.

What I find more significant is the wave of opposition to North Carolina's HB2, following on the resistance of the Governors of South Dakota and Georgia towards similar legislation in their states. The Justices, who could choose to overturn the 4th Circuit decision and send thousands of students back into the closet, would be supporting some of the red states and flying in the face of the growing cultural and corporate support for the entire LGBT community. In some respects, we've come so far that it's less about us than about our millions of allies. It also seems unlikely, given the hysteria of the opposition, which until recently didn't attempt a reasonable argument.

Into what have their arguments evolved? That imposing a trans boy on cis girls is also a form of sex discrimination, and that allowing children and adolescents with a penis into a girls' locker room is an invasion of bodily privacy. The problem with the first argument is that we're not dealing with behavior, but with feelings, and the Court has never been interested in people's feelings while discriminating. That argument eventually failed for white people who were offended by the simple presence of black people. The second argument is barely believable from a community that thoroughly rejects the Court's finding of a right to privacy in Roe. Women have a right to the privacy of their own actual bodies, not to their feelings about their bodies, or even more so, their feelings about other's bodies. But those who reject Roe are laughable when they make a Roe claim to their privacy when it's limited simply to feelings. No one believes the sexual predator arguments, as evident from the court decisions to date, and given the cogent arguments promoted in the Schroer, Glenn and Macy cases, it's hard to believe the Court will fall prey to them.

Finally, there is another twist in the trans movement that didn't exist for the other communities discussed above. Trans persons have won legal rights rooted in the Court's own arguments on sex stereotyping in the 1989 Price Waterhouse v. Hopkins case, the case that revolutionized women's rights at the end of the Reagan administration. To undermine Auer deference and to overturn the evolution of thinking in government agencies like the EEOC and Justice would only remove one form of legal support for the trans community, leaving in place the sex stereotyping argument. That would be an act of sloppy reasoning and would resolve very little, confusing the people as well as the courts.

I hope the attorney from the ACLU (James?) who will be arguing this case in April makes a powerful and ringing endorsement of the dignity of all trans persons, without any trace of defensiveness. And that Justice Kennedy and the new Justice concur.