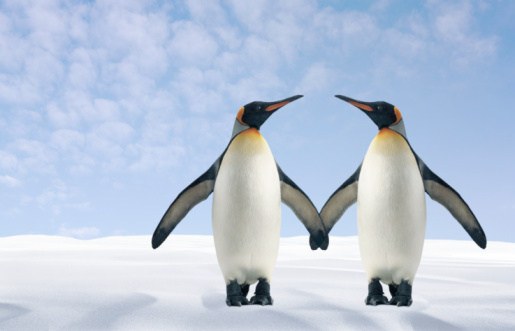 Finally, a zoo for them, too.
(Photo: Getty Images/Fuse)

In addition to having one of the world's largest concentrations of gay residents, San Francisco is about to reach another major gay milestone -- the opening of the world's first all-gay-animals zoo! "We're absolutely thrilled that we can give the residents what they want," explains San Francisco Gay Zoo director Lionel Wibberly. "Our society is so diverse, and the animal kingdom is so diverse, why shouldn't there be a zoo that reflects that wonderful diversity?"

Professor Jose Aragon, chairman of San Francisco State University's Department of Zoology, agrees. "We know for a fact that there are homosexual and bisexual animals. Cats in particular. There are even transgender and transexual ones. There's no reason why animals exhibiting unconventional lifestyle behavior shouldn't have their own special zoo in the city famous for gay relationships."

Although the gay animals zoo is still only in the planning stages, the religious right is already up in arms over the prospect of the immoral behavior that they envision the zoo will be showcasing. "We're absolutely opposed to spending taxpayers' dollars for something that is offensive, sacrilegious, unnatural, and no doubt traumatic to children," states Keith Noron, president of the National Ethics Association, a Christian fundamentalist group. "I mean, really, would you want your children watching two male zebras having carnal relations?"

But according to Professor Aragon, the gay animals zoo is not just about male monkey love. "Gay animals exhibit plenty of nonsexual behavior, as well. We observed friendships, partnerships, traveling together, defending each other, and raising cubs together -- just as in the human world. Plus, there's a very high entertainment factor -- these animals sing and dance together in a style not unlike that of the Village People."

And yet with some species, such as rabbits, monkeys, and geese, it's hard to observe them for longer than a minute without noticing a sexual act of some kind. "It's a kind of behavior that's not often observed outside the Playboy Mansion and perhaps George Clooney's house," explains Professor Aragon, who adds, "There is mounting evidence, if you'll pardon the pun, that many beasts exhibit a special courtship pattern found exclusively in homosexual interactions."

Gay ostriches, for example, court each other "with a lively dance that involves running toward their chosen partner at 30 miles per hour, skidding to a stop in front of him, pirouetting madly, then 'kantling,' which consists of crouching, rocking, fluffing your feathers, puffing your throat in and out, and twisting your neck like a scarecrow," reveals Dickerson.

The San Francisco Gay Animals Zoo is scheduled to open early next summer. According to Wibberly, "gays, lesbians and bisexuals will receive a 10-percent discount on admission, and the zoo dress code will be clothing-optional."