Every time you witness homophobic bigotry on the Internet, remember this: By and large, America is ready and willing to support gay professional athletes.

Seventy-three percent of Americans say they would fully support a professional sports team that signed a gay or lesbian athlete, according to a new survey by the Public Religion Research Institute, a nonprofit research organization. Only 19 percent of those surveyed said they would oppose such a decision.

"If team owners in the league have any doubt about if Americans are ready for a gay or lesbian player on their team, this survey should put any of those doubts to rest," Robert P. Jones, the CEO of PRRI, told The Huffington Post over the phone. "There are very few issues where you can find three-quarters of Americans in agreement."

Only one openly gay athlete has ever played a game in one of the four major American men's sports leagues: Jason Collins. The now-retired center made history in 2013 when he came out in a first-person Sports Illustrated article, and then again when he stepped onto the court as a Brooklyn Net in February 2014.

"I'm glad I'm coming out in 2013 rather than 2003," Collins wrote in Sports Illustrated. "The climate has shifted; public opinion has shifted. And yet we still have so much farther to go."

Today, support for LGBT athletes exists across every major demographic group surveyed. When PRRI broke down the survey data by race, age, political affiliation and religion, not one demographic group registered majority opposition to the idea of a gay or lesbian athlete.

Seventy-nine percent of Democrats, 75 percent of independents and 66 percent of Republicans said they would support a team that signed a gay athlete. 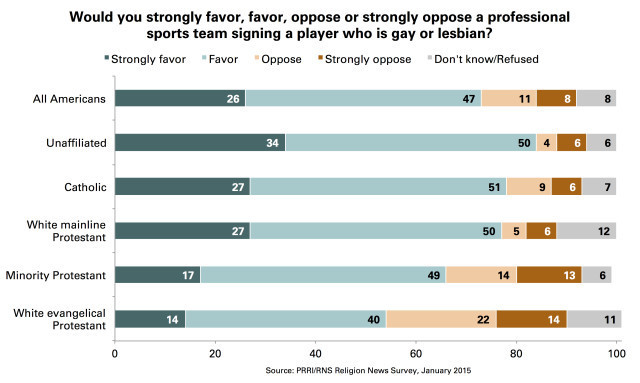 The PRRI survey was conducted over the phone from January 14 to 18, 2015, and interviewed 1,012 adults living in the U.S. This was the first year PRRI asked respondents about their views on gay and lesbian athletes.