Gore Vidal was not just a novelist and essayist; he also ran for Congress in 1960 in upstate New York. In a 1988 interview I asked him whether there was any gay baiting in that campaign.

"Even then it was considered bad karma to fuck around with old Gore," he told me. "But just to be safe I had something on every politician and publisher in the district. There was one old newspaper publisher up in Columbia County, the most conservative of the five counties. He was making some giggly hints about me, and he was also having an affair with his son's wife. So after he took one particular swipe at me, I went on the radio in Hudson, the county seat, and I was asked, 'Are you getting any ideas for any novels while you're doing this?' 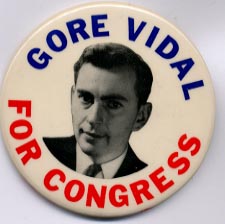 "I said, 'Well, every now and then I do get an idea. I thought of a funny one the other day. A father and a son. The son marries this woman who's very good-looking, and the father has an affair with her.'

"The whole county burst into laughter, and I never heard another word from the Chatham Bee, I think it was called. Do that sort of thing once or twice, and you don't have to worry."

Vidal lost the election but ran 20,000 votes ahead of JFK in the district, carrying every town, starting with Poughkeepsie.

This piece was adapted from I Told You So: Gore Vidal Talks Politics -- Interviews with Jon Wiener.