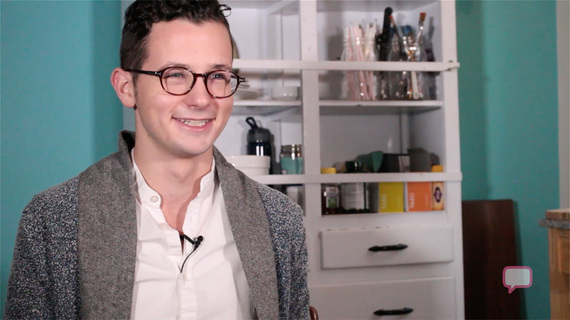 While abroad in Morocco, one of 77 countries in which it is illegal to be gay, Anthony Mercurio was dumped by his first love. "I was pretty devastated," Anthony recalls:

[F]or a week, basically, I was, like, in tears or crying or upset, and my host family had no idea what was going on, so they were so confused as to what was happening. They were like, "Is he homesick?" Like, they kept asking me questions, and I was like ... "Everything's fine. I'm just sad." And you can only say that so much.

Unable to express the real reason for his heartbreak, at least Anthony had his host grandmother there to comfort him:

She didn't actually even speak Arabic; she spoke Berber. So we literally could not communicate ever. There was no point in which we could, like, communicate verbally with each other. ... So we couldn't talk, but she would just ... bring me a plate of food and, like, pat me on the back and, like, rub my back and then walk away. And then she would come back like 20 minutes later and take whatever -- I probably hadn't eaten that much -- but she would, like, bring another plate of food, and then she would bring me tea or something, because that was her way of making me feel better, and that was glorious.

And as Anthony realized, his grief and distraction about his boyfriend were only ruining his experience:

I kind of buckled up and decided that I'm in Morocco for another three months, and this is a once-in-a-lifetime opportunity. So I decided to kind of jump off and just be fully present in everywhere I was.