By Rob Watson | The Next Family

Mother’s Day is a fascinating event. Most holidays are ones that we relate to each other in a common experience, and yet personally, each participate with our own set of rules, traditions and experiences.

Mother’s Day seems especially this way, almost more than others. At least it does for me as a gay dad. One of the first parental arguments I had with my partner when we adopted our boys was how we were going to celebrate Mother’s Day with them. I wanted the holiday to be about the concept of mothering, being nurtured, loved and cared about, as our sons were. He insisted the holiday was about the closest biologically female relative. We never did find resolution.

The origins of the holiday in the U.S. were equally conflicted. The earliest proponents of the theoretical concept, Ann Reeves Jarvis and Julia Ward Howe in the late 1800s, had nothing to do with caretaking of children. Their concepts called for the mothers of the country to take activist stands in re-unifying the country after the Civil War, and to stand for world peace.

Ann Reeves Jarvis’s daughter, Anna Jarvis was the real architect of the holiday itself, however. Her concept was closer to the contribution of women to their children and the sacrifices they made in that regard. She also felt the recognition needed to be added to the national calendar. It was to balance out all the recognition of men throughout the rest of the year. She felt that the women in society were being undervalued and their contribution in the home needed to be recognized.

The holiday itself got away from Miss Jarvis and her vision, however. It quickly became the sentimental commercial venture that it is today, and she eventually renounced it. Families and businesses were customizing it to their own desires, away from her original activist stance.

Fast forward to today. Motherhood has become an emotional and somewhat polarizing issue. Many fathers have stepped up in their families as the primary caregiver and nurturer. For me, and other gay dads, this is certainly true. Much of the public perception borne out of experiences with bad male parental behavior in the past, nostalgia, and media characterizations would have you believe that men cannot mother, at least not as well as a woman can.

Commercials have certainly beat the drum on this idea. Huggies came out with an ad a few years ago that proclaimed that their diapers were “dad proof." So simple that even we could not screw them up. This year during the Olympics, ads thanked moms the world over for crafting the athletes of today. Many ads portray the male parent as basically another child in the family, and mothers, super human.

Do women have a biological disposition to mothering that men do not have? There are many people who think that is the case. Many anti-gay and anti-marriage equality WANT to believe that is the case. Studies are not supporting this concept, however.

For me, I don’t believe I am less qualified in mothering than my female counterparts. I know the feelings that I have towards my sons, and they are full-on saturated with what I can only tell you is “mother love." I live and breathe for my boys, and would die for them. Someone pointing out my gender does not change that fact.

So—here is my confession for Mother’s Day. I want a seat at the table—for my sons. I want a seat at the table for the children of all the men like me who feel as I do in our role as the nurturing parent. I do not care about the candy, the flowers or the brunch. I care about it for one reason only: I do not want my sons to get the message that they somehow are missing some vital parenting in their lives that others are getting. They do have a “mom," theirs just happens to be anatomically male.

My boys understand this on their own. When they were seven, they surprised me with breakfast in bed and hand made gifts they had created. Jesse explained it all to me in no uncertain terms, “No one’s mother does more for them than you do for us, Daddy. This is a day for all the cool things that mothers do and you deserve to be recognized.”

He and Jason then showed me all the things they had done for me. Their faces beamed with pride over being able to show me their love and to give back. They were proud to be part of the celebration and the generosity.
Jesse concluded, “This day is…for you, Dad.”

I threw hugs around them, and was overjoyed at all they had done and put together. As I hugged and kissed them, I heard myself thinking, “No pal, this love is for YOU. This day just tells me you know you have it.”

Rob Watson is a writer for The Next Family and Evol Equals.  He lives in Santa Cruz with his family.

More on The Next Family:

Learning That Your Dad is Gay Later In Childhood

Surviving the Struggle: A Personal Perspective on LGBT Youth and Suicide

A Majority of LGBT Employees Closeted on the Job 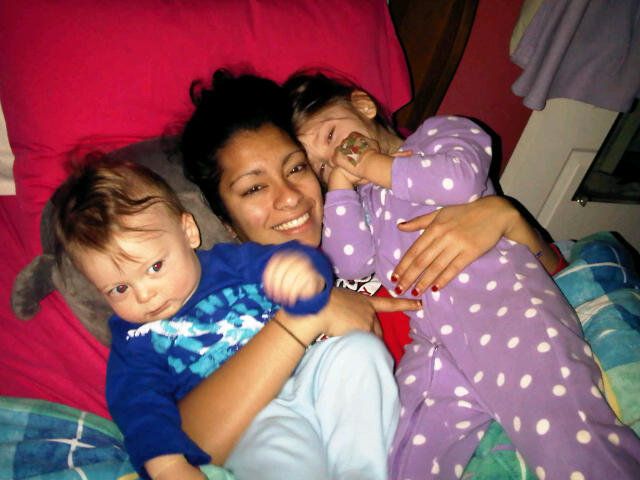 1 / 28
<a href="https://twitter.com/kateygoalie" target="_blank">Angie Seth, Toronto, Ont. </a> "I am a Mother of three beautiful children (18-year-old, 3-year-old old and 1-year-old) who I cherish every day. My wish is almost the impossible: to ensure they will always be safe, happy, successful, healthy. That they will always follow their dreams, laugh every day, love to their fullest, and to take care of each other. A good night sleep for Mommy would be nice too! Happy Mother's day to all those heros out there!"