Pierce Brosnan has no problem with a gay James Bond, but Hollywood might feel differently.

The 62-year-old actor, who played Sir Ian Fleming's signature character from 1995's "GoldenEye" through 2002's "Die Another Day," told Details magazine that he had no qualms about having Bond played as a gay man, but noted, "I don't know how it would work."

"I don't think Barbara [Broccoli, the James Bond producer] would allow a gay Bond to happen in her lifetime," he said. "But it would certainly make for interesting viewing."

While Daniel Craig is committed to the role for the foreseeable future, Brosnan sees a "great black actor" tackling Bond before a gay 007 happens.

The debate over whether or not the womanizing Bond could be re-cast as, well, a man's man has been brewing for some time. In a new interview with PrideSource, "Star Trek" and "American Horror Story" star Zachary Quinto bemoaned the lack of gay actors in big-screen action roles, saying he "definitely" thinks there can be a gay Bond in the future.

Meanwhile, an erotically-charged scene in 2012's "Skyfall" where Silva (played by Javier Bardem) unbuttons Bond's tuxedo shirt and caresses his thighs led some fans to believe that Bardem's character was gay.

Describing the scene as "a game of cards," Craig acknowledged the speculation coyly, telling Movieline, "Someone suggested that Silva may be gay. I'm like, I think he'll f*** anything." 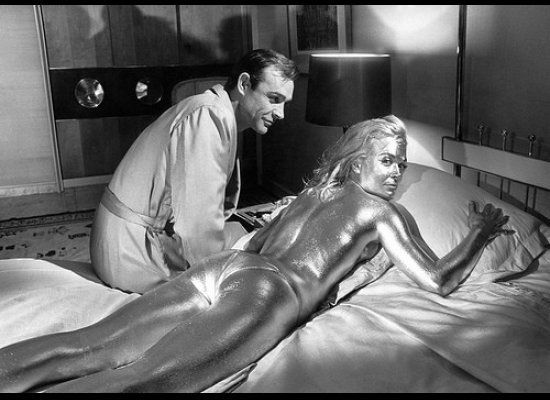 1 / 7
Sean Connery, six films (1962-69, 1971)
Above: Sean Connery on the set of Goldfinger with Shirley Eaton, who played the ill-fated Jill Masterson. Connery, the original Bond, starred in a total of five films in the 1960s: Dr No, From Russia With Love, Goldfinger, Thunderball and You Only Live Twice. He left the role, succeeded by George Lazenby, who only did one. Connery returned for one final film, Diamonds Are Forever.