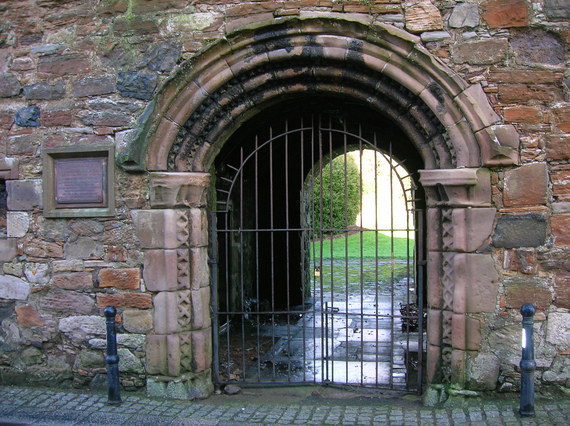 In a secret vote of dubious legality, major regional bishops ("Primates") of the Anglican Communion have lobbed a bomb in the American culture wars over gay marriage: the Episcopal Church USA has been censured for blessing marriages between men or between women. For the next three years, supposedly, Episcopalians will not be appointed to internal committees in the Communion, nor allowed to vote on policy. They are not to represent Anglicanism in conversations with other religions, although in fact the Primates have no authority over interfaith organizations. This demand for doctrinal uniformity is dramatically at odds with the longer Anglican tradition, which has always emphasized a willingness to pray and live together despite theological disputes.

The Episcopal Church USA has steadfastly held its ground. Given that resolve, it's far from clear what practical difference this decree will make, or where any of this may lead in three years' time.

One thing is remarkably clear, however: in this situation as in so many others, gay people are serving as poster children -- if not scapegoats -- for other anxieties. In this case it's the status of biblical scholarship and cultural criticism. It's the tension between fundamentalist churches and theologically rigorous churches within the global Anglican Communion. Episcopalian bishops might not speak so bluntly, at least not in public; but I'm not an Episcopalian. From the outside, the issues here are obvious.

The first and most obvious controversy is the dispute between biblical scholars and biblical literalists. If Paul says homosexuality is an abomination, or the book of Leviticus does, is the matter settled once and for all? Or is it theologically legitimate to set these texts in context before we decide what they mean?

For instance, does authorial intention have a role to play in textual interpretation? Paul could not have intended to denounce long-term, morally serious, sexually faithful relationships between men or between women, because such marriages were unknown in his culture. What contemporary behavior is he alluding to when he includes homosexuality in a catalogue of anti-social sins? There's nothing inherently anti-social in a relationship of authentic love and committed fidelity between two people. What is Paul trying to say that still has relevance?

The same controversy between literalists and scholars shows up regarding the prohibitions in Leviticus. These prohibitions reflect an Iron-Age theological biology according to which biodiversity is a metaphor for sinful tendencies throughout creation. Leviticus condemns all sorts of variations that today we accept as morally unproblematic -- animals with paws rather than hooves, sea creatures with shells rather than fins and so forth. Can biblical scholars and moral theologians take that elaborate symbolism into account? Can the church listen to what contemporary biology attests about the normality of biodiversity, including variant sexual orientations?

In short, can rigorous theology suggest that some biblical injunctions are no longer morally relevant? That's the deeper issue at stake in the censure of Episcopalians. Biblical literalists and inerrantists cannot imagine ever setting aside any bible verse -- or so they claim. In fact, all literalists are quite selectively literal. In particular, the Religious Right routinely ignores major biblical demands for socioeconomic justice, inclusivity, responsibility to the common good, nonviolence and care for those unable to earn a living for themselves.

Careful scholarly attention to cultural context also illuminates the evolution of Christian doctrine. For instance, early Christianity came quickly to be dominated by non-Jewish ex-pagans. They brought their own philosophical and cultural assumptions with them. Central among these assumptions was an extraordinarily negative attitude toward sexuality. According to Plato, sensual pleasure of any kind pulled the immortal soul downward, away from pure otherworldly pursuits. Zeno insisted that the wise will have sex only for procreation. The Neoplatonists regarded embodiment as a flaming disaster from start to finish.

Such attitudes generated what has been called the "heroic asceticism" of desert monastics in early Christianity: extraordinary fasting, sexual renunciation and so forth. This hostility to the body persists today in the Roman Catholic opposition to birth control. But if sex is morally tolerable only for narrowly utilitarian purposes -- only for getting pregnant -- then safe sex, sex after menopause and gay sex are all equally forbidden. That would have made perfect sense to Plato, Zeno or Plotinus. Jesus would have been baffled. As a good Jew, he saw embodiment as sacred not catastrophic.

Here's the scholarly question at stake. If we recognize that early Christian hostility to the body reflected Greco-Roman cultural influence -- not the teachings of Jesus -- then we are admitting that church teachings are culturally situated. The history of dogma ("opinion") and doctrine ("teaching") reflects how the gospels were understood at particular cultural moments. Period. None of it is necessarily binding on the present. Like Christians of the past, we are to engage the tradition with the best critical tools and broadest moral sensitivity available to us, trusting that God is with us and within us, calling us always to courage and to compassion, calling us to be bread for a starving world.

This is perhaps the greatest issue at stake in the religious legitimacy of gay marriage: Episcopalians, like other mainline Christians, have in effect admitted that they were wrong in refusing to bless the marriages between men or between women. And so they changed. But if the church can make such a mistake, might it also be wrong on other issues? Can Christians consider that possibility?

Some can. Some can't. For some people, religion must be rigid, absolutist and judgmental in order to count as "religion." That need for self-righteous absolutes is perhaps the deepest anxiety of all.

It seems to me that any institution is doomed if by definition it cannot admit a mistake or adapt to new information as it emerges. After decades of discernment -- study, critical scholarship, difficult conversation and prayer -- the Episcopal Church USA has come to recognize and bless the holiness of marriages between men or between women. It is unfortunate that the Anglican Communion is attempting to block their leadership by refusing to listen and by barring them from participation in global interfaith conversations. But the truth can't be stopped by barring truth-tellers at the door.

The Episcopalians may be excluded from full membership in the global Anglican Communion. But the truth abides.