Here are your choices: flay, frown, fume or feel any number of positive emotions about Time Magazine's covers, but don't make decisions based on them. 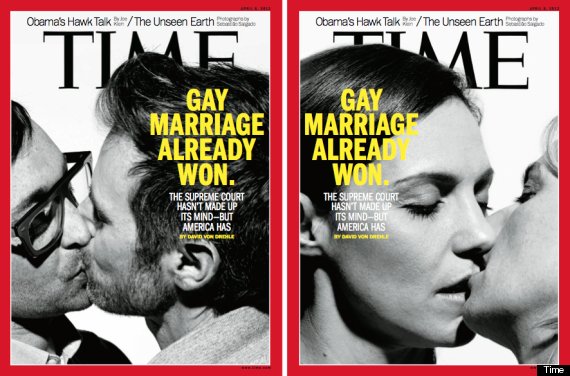 Take for example, last week's dual-covers of the Time, flaunting two men and two women kissing with a headline "Gay Marriage Already Won." Knowing how millions of opponents of same-sex marriage might react to such images, Time's Managing Editor, Rick Stengel, preemptively coaxed them toward a decision by writing this in the Politico's Playbook, "Some thought they were sensationalist and too in-your-face. Others felt the images were beautiful and symbolized the love that is at the heart of the idea of marriage. I agree with the latter, and I hope you do too."

You sure don't believe in subtlety Mr. Stengel, do you?

That may be the case. But this seismic social shift lie along the American family's fault lines, so decide carefully, just like the Supreme Court. Don't let a fleeting, sensational image sway you.

Time is challenging an institution that has time on its side; well over 2,000 years and counting. On the contrary, Time's verdict, particularly around social issues, inverts well within a lifetime.

It was the same Time Magazine cover that was predicting a "growing movement to strengthen marriage..." in 1995. By 2000, it shifted to "Who needs a husband?" And by 2010, the question became "Who needs marriage?"

Anytime Time uses the word "marriage" in its cover, I know the idea will be divorced in a few years. It was one thing if Time Magazine covers had only vacillated over the issue of marriage; but that's not the case.

In 2005, Time's cover was tempting to many: "Why we're going gaga over real estate". Within a year, the housing market peaked. Come 2010, and the cover read "Why owning a home may no longer make economic sense." What? They flipped on us, long before we could flip over those overpriced properties.

In 2004, Time encouraged well-educated moms to stay-at-home by sharing, "Why more young moms are opting out of the rat race." I am sure women who quit the "rat race" back then didn't feel appreciated when they were instructed by the same magazine's cover this month to not "... hate (Facebook's Sheryl Sandberg) because she is successful."

And who can forget the 1966 bombshell cover asking, "Is God Dead?" Anyone who allowed that cover story to hurt their faith must have ached to discover in 2009 as to "How faith can heal."

Finding a spouse, buying a house, pursuing a career or believing in God are life changing decisions. Decisions which cannot be relegated to the shifting sands of weekly magazine covers.

With only 3.4 percent of Americans identifying themselves as LGBT (and a fraction of them interested in tying the knot) don't expect the stigma associated with same-sex marriages to fizzle out anytime soon. With less than 15 out of the 242 countries in the world recognizing same-sex marriages and many US states banning them, this fight won't end even with a favorable Supreme Court decision.

Hindsight was so 20/20 when the housing market collapsed in 2008 but even then, nobody questioned Time Magazine's cover story. The government bailed out the lenders and the economists touted a financial correction.

How 20/20 will it be in hindsight if same-sex couples failed to sustain a family structure which inherently favors heterosexual couples? I don't know that. What I do know is that further erosion of the American family will, eventually, cause a lot of brouhaha. The government will not have the currency to bail us out, the priests will preach a moral correction and our children will have some life changing decisions to make.

But the decision for Time Magazine will be easy: flip again and simply reprint the 1995 cover, forecasting "a growing movement to strengthen marriage."

Dr. Faheem Younus is a clinical associate professor at the University of Maryland. He is the founder of Muslimerican.com. He can be reached at faheem.younus@gmail.com and follow him on Twitter at @FaheemYounus.