WASHINGTON -- Two years ago, President Barack Obama was not quite ready to say, as he did Wednesday, that he supports same sex marriage, but he conceded at the time that "attitudes evolve, including mine." In a question and answer session with progressive bloggers in October 2010, Obama was quoted by Americablog's Joe Sudbay saying "it's pretty clear where the trendlines are going."

If the president was thinking of the trends in public opinion polls, his read was dead-on. Surveys by various national media pollsters have shown a consistent, ongoing trend toward support of same-sex marriage, with slightly more Americans offering support than opposition in measurements taken over the past year.

For example, a just completed national Gallup poll fielded May 3-6 shows 50 percent in support of same-sex marriage and 48 percent opposed, slightly down from 53 percent support a year ago. As Gallup explained, the latest result marks "only the second time in Gallup's history of tracking this question" that support exceeded opposition. 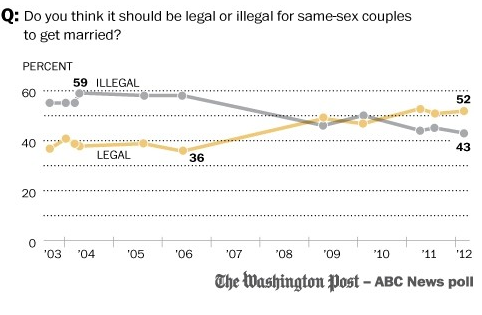 A recent Pew Research report also shows that although black Americans are still more likely to oppose same-sex marriage than whites, the gap has narrowed significantly since 2008.

In a recent New York Times column, Pew Research president Andrew Kohut noted that while "much of the growing support for gay marriage is generational," it also reflects changing opinion among older Americans. "Since 2004," Kohut writes, "support for gay marriage has increased from 30 percent to 40 percent among baby boomers, and even among seniors (from 18 percent to 32 percent)."

Kohut also argued that the shifts in attitudes change the "political prospects" for the issue, particularly because of what he described as a narrowing of the "partisan intensity" gap in recent years that has worked to the advantage of opponents of gay marriage. "Today there are almost as many strong supporters of gay marriage among Democrats (34 percent) as there are strong opponents among Republicans (40 percent)," Kohut wrote.

Whether Obama's embrace of same-sex marriage will further shift the intensity of opinion on this issue remains to be seen, but as the president observed nearly two years ago, the direction of the trends is clear.