WASHINGTON -- The Supreme Court on Monday set the United States on a historic civil rights path, paving the way for the majority of Americans to reside in states where same-sex marriage is legal.

The court declined to hear appeals from five states that were challenging lower-court rulings legalizing same-sex marriage. By passing on that debate, the court gave a final legal stamp of approval to marriage equality in five states: Indiana, Utah, Oklahoma, Virginia and Wisconsin. It also set the stage for legalization in six other states that also fall under the lower courts' jurisdiction: Colorado, Wyoming, West Virginia, North Carolina and South Carolina.

When all is said and done in those states (which could happen in short order, according to the Associated Press), same-sex marriage will be legal in 30 states and the District of Columbia. 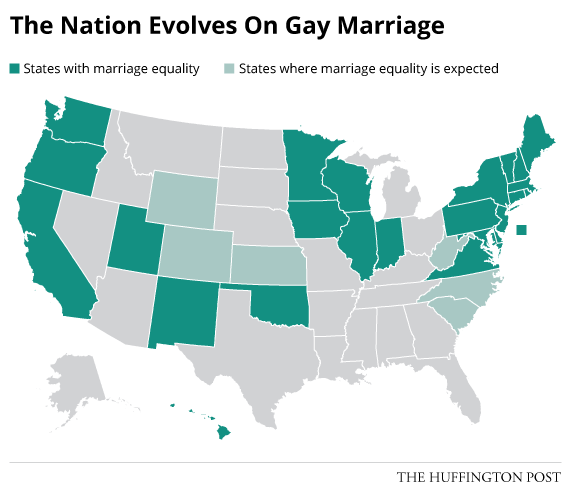 The total population of those states, based on 2013 estimates from the Census Bureau, is about 190 million. Just over 60 percent of the U.S. population now lives in a state where marriage equality soon will be legal.

Prior to Monday, that total was just under 44 percent -- if you discounted states where same-sex marriage was legalized but there were still court challenges. In all, the Supreme Court's decision on Monday set the path for an additional 51,579,771 people to live in states with concrete same-sex marriage rights.

Breaking the 50 percent threshold represents a monumental achievement for the gay rights community -- one that few could have envisioned just years ago. But it's a touch bittersweet for advocates who will note that 48 percent of the population remains in areas where same-sex marriage is banned, and who were hoping the court would weigh in on whether marriage for same-sex couples is a constitutional right.

"[W]e are one country, with one Constitution, and the Court’s delay in affirming the freedom to marry nationwide prolongs the patchwork of state-to-state discrimination and the harms and indignity that the denial of marriage still inflicts on too many couples in too many places," said Freedom to Marry President Evan Wolfson. "As waves of freedom to marry litigation continue to surge, we will continue to press the urgency and make the case that America -- all of America -- is ready for the freedom to marry, and the Supreme Court should finish the job."