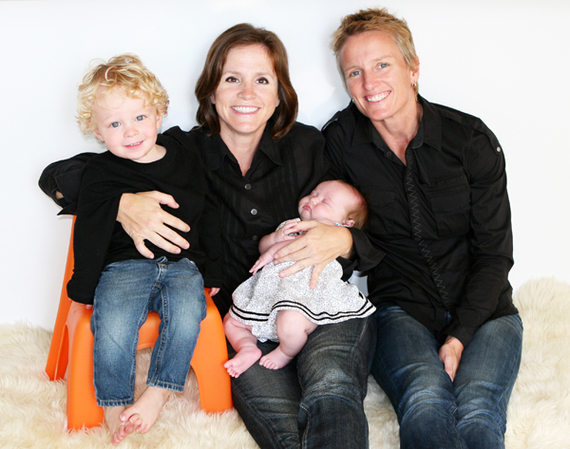 There are some who'll tell you that during this election, at this time in our country, the "social issue" of gay marriage is not important enough to trump issues of foreign policy and the economy. That, despite the many human lives impacted by our legal unwillingness to let gay and lesbian couples marry for love and the protective covenant of the institution, more urgent issues reign. In a Facebook comment that ultimately went viral, writer Doug Wright spoke eloquently to the culture-clash:

I wish my moderate Republican friends would simply be honest. They all say they're voting for Romney because of his economic policies (tenuous and ill-formed as they are), and that they disagree with him on gay rights. Fine. Then look me in the eye, speak with a level clear voice, and say, "My taxes and take-home pay mean more than your fundamental civil rights, the sanctity of your marriage, your right to visit an ailing spouse in the hospital, your dignity as a citizen of this country, your healthcare, your right to inherit, the mental welfare and emotional well-being of your youth, and your very personhood."

It's like voting for George Wallace during the Civil Rights movements, and apologizing for his racism. You're still complicit. You're still perpetuating anti-gay legislation and cultural homophobia. You don't get to walk away clean, because you say you "disagree" with your candidate on these issues.

So let's view this in the context of the oddly articulated campaign season we've been enduring. There've been a slew of very specific words thrown around, often spiking in odd, awkward clumps, usually in tandem with a related story about politicians making ill-advised comments about something in the arena of sex. You know the ones: Rape. Abortion. Slut. Vagina. Gay. Birth control. Rape. Gay sex. Vagina. Gay marriage. Reproduction. Rape. (Nope, you didn't miss it; no Viagra or penises in there anywhere.)

Beyond the Republicans' queasy fixation on these words, most recently on matters of rape , and with the knowledge that most on the Right would describe themselves as religious, predominately Christian-based religious, one is left to extrapolate that their positions on the above words are mandated by their God and doctrine. Abortion is, of course, off-the-charts wrong on every level, at any time, for any reason; birth control (though statistically used by most Christian women) is also unscientifically defined as "killing life" and, therefore, wrong; rape is surely wrong but rape babies are gifts from God, and vaginas... well, vaginas are vulnerable to any manner of male meddling and are only not wrong if they're married vaginas doing what married vaginas do. Penises, we don't worry ourselves with those.

Which leaves us with the gay issue. Specifically, the gay marriage issue. Which I want to take on because it's important, it's essential and, don't kid yourselves, you "it's only about the economy and foreign policy" people; for many in this country gay marriage is a very big election issue.

Despite Doug Wright's purported friends referenced above, I suspect many of those most vocally and vociferously against gay marriage do not actually know any gay people, particularly any gay people in loving, committed relationships for whom the matter of gay marriage is a painful one. If they do, they don't know them well; they don't sit at their dinner tables sharing life and discussing the kids and hearing stories about what it feels like to be ostracized for a sexual orientation they had no choice in but simply is "as God made them." I'm sure they don't because, if they did, they wouldn't be donating money, standing on street corners with placards, pontificating bigoted nonsense all in the name of God and defending "traditional" marriage. 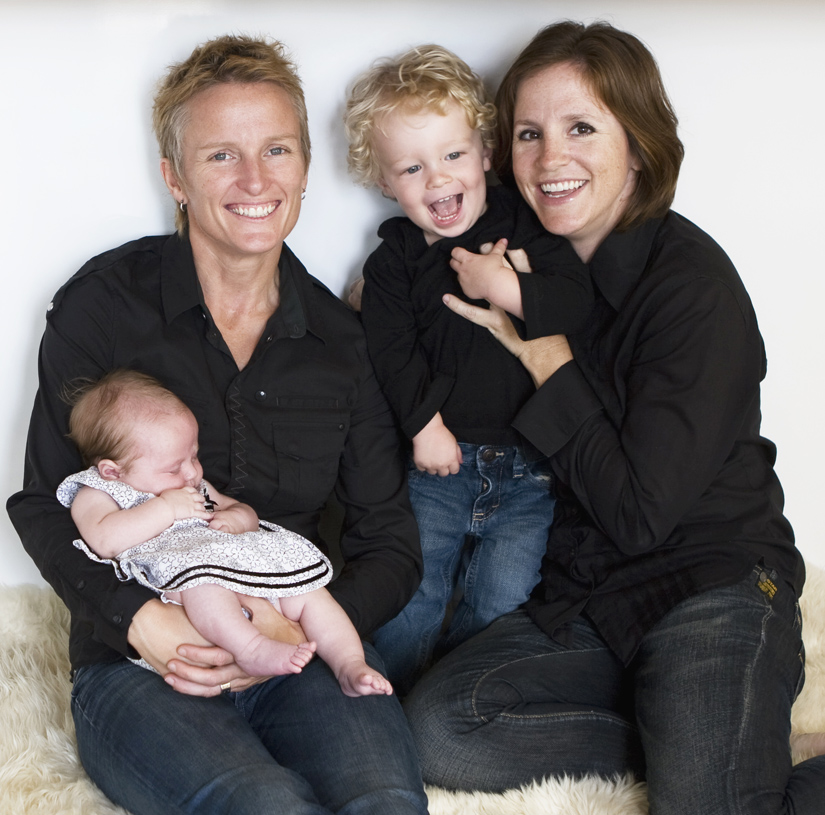 So in the spirit of humanizing this issue, I want you to meet some people I know: Jodie Davies and DeAnne Aussem. They are a lesbian couple I wrote about almost two years ago in a post illustrating the indefensibility of DOMA. They've been together longer than many, many straight couples I know. They are both extraordinary women, exceptional professionals in their fields, deeply loved by many, accepted by their families and, currently, the parents of two beautiful children. Their first, a boy, is Jodie's biological child; DeAnne was the carrying parent. Because they're two gay women who cannot legally marry and, consequently, cannot presume their legal relationship with their son, they had to legally adopt him. Let me say that again: they had to legally adopt their own son.

Their second child is a sweet little girl whom they recently adopted. Shortly after they did, I got into a Facebook discussion on the topic of gay marriage and a woman I don't know jumped in on the thread to assert: "Gays just expect us to accept their lifestyle but if they want that, they have to prove their lifestyle won't do damage to traditional marriage." Yes, that's logical, I remarked... because there are no straight people who've inflicted damage on the institution so let's circle the wagons and keeps the gays from wreaking havoc. Dear God.

In my response I relayed the story of the adoption of Jodie and DeAnne's daughter, because it so poignantly illustrates the hypocrisy, ignorance and bigotry not only of that woman's statement, but the rhetoric that is spouted and justified by many on the Right.

Their little girl was born to an attractive, middle-class, married straight couple -- grown people in their twenties/thirties, who were on the rocks and considering separation. The woman had had two previous children (with two different fathers), both of whom she gave up for adoption. When this third pregnancy occurred, given the status of their marriage, they didn't want the responsibility of raising the child; the husband signed away his rights and the wife picked Jodie and DeAnne as the adoptive parents, because, as she expressed to them, "she could tell how much we loved each other and how happy we were from our profile book. Said she just wanted this little girl to be loved and have a life she couldn't give her based on her relationship and circumstances." Luckily, she choose wisely.

But get the irony: a married straight couple, with a wife who cyclically procreates children she cannot, or will not, take responsibility for, and she chooses a stable, functional, happily committed gay couple to adopt their unwanted offspring... and still some dare to suggest that GAY COUPLES HAVE TO PROVE THEY WON'T DO DAMAGE TO TRADITIONAL MARRIAGE BEFORE THEY CAN BE ALLOWED TO BE LEGALLY MARRIED. I know... my head is shaking too.

In her piece, For Republicans, Election Is a Last Stand Against Gay Marriage, writer Rebecca Buckwalter-Poza makes the point that, despite the slow but inexorable cultural tide-turn toward legalizing gay marriage, Republicans are "going for broke" in their well-financed stand in opposition. Why, exactly? According to Buckwalter-Poza:

They're after the White House. [...] Romney desperately needs evangelicals to have a shot at the White House. White, evangelical voters represent nearly 50 percent of the conservative base and made up nearly a quarter of the electorate in 2008. In his analysis of the Republican primary, Ryan Lizza wrote, "the single best predictor of whether Romney loses a state is the percentage of voters who describe themselves as evangelical or born-again."

So despite a growing acceptance of gay marriage, despite the growing number of gay and lesbian couples living "as if married" -- buying homes, paying taxes and raising happy children; despite the emotional and economical benefits of gay marriage, the Republicans are doubling-down in their opposition during this election because "Romney desperately needs evangelicals to have a shot at the White House."

When embracing a worldview of tolerance, acceptance and empathy would go a long way towards humanizing the Right, Romney and his party are, instead, working against the curve of history to continue marginalizing the gay and lesbian community out of fear of losing evangelicals and conservative Christians, who base their politics how they interpret the Bible. In a modern world of evolving cultural demographics and advancing science, we've got a Republican party with an antiquated strategy that looks a little like this:

Either Romney or gay marriage doesn't stand a chance.

I'm betting the majority of Americans, many of whom are Christians who reject the judgment and intolerance of their more fundamentalist brethren, will get it right. I'm betting, at the end of the day, that Jodie and DeAnne will finally be able to enter into "that most tender union" in legal and binding commitment; to embrace their bond to each other, their children, and the life they've created together in honor and love. I, and many others around the country, the world, will be cheering them on.

Romney? He's got his own family to worry about and plenty of time to plot his next move. He'll be just fine.

Photos by Lorraine Devon Wilke with the permission of the Davies/Aussem family.