Recently Esquire published an article written by the intuitive Mick Stingley synopsizing HBO's Looking for the straight-male community. In the article, Mick astutely points out that "this show is pretty gay" and expresses his disappointment that there aren't more similarities or references to RuPaul, who is "really fun," unlike Looking or its characters, which don't live up to his standards regarding how fabulously hilarious we queers should be. While I'm not in any way affiliated with the show, I believe I owe Mick an apology because I too can be pretty boring, and I know this challenges what he expects members of the gay community, and their depiction on television, to be. Over the last few years my sexcapades have gotten pretty regular and monogamous, while I've also become less of a bitchy accessory to my straight female friends. Actually, I know quite a few tedious queers out there who, in our effort for equal rights, may have had less time to entertain you. But I digress.

Looking does nothing to dispel the stigma that gay men spend their time hooking up with guys and talking about hooking up with guys, but it doesn't have to. Do I wish there were more diversity in our programming? Sure, but it is not a television show's responsibility to portray all factions of a complex community. However, it is important to portray its chosen factions with integrity, and it just so happens that there really are gay guys with beards who hook up with other guys who may or may not happen to have beards. Is it groundbreaking television? Probably not, buts it's not fair to offensively criticize the show for mainstreaming the lives of gay men and not depicting them as "fun" enough.

Esquire's disclaimer points out that this article just "reflects one man's viewing experience." Similarly, Looking is the experience of a few gay men in San Francisco and in no way attempts to generalize the experience of all gay men into one 30-minute dramedy. This is not unlike HBO's decision to have Girls derive from Lena Dunham's personal experiences instead of the experiences of every diverse female living in New York City. I reiterate: Do I wish there were more shows that portrayed other segments of these communities than the privileged white ones they seem to be so overwhelmingly preferential toward? Absolutely, but Looking is actually much closer to reality in that sense; plus that's an entirely different blog post, and I'm getting off-track from chastising Esquire. 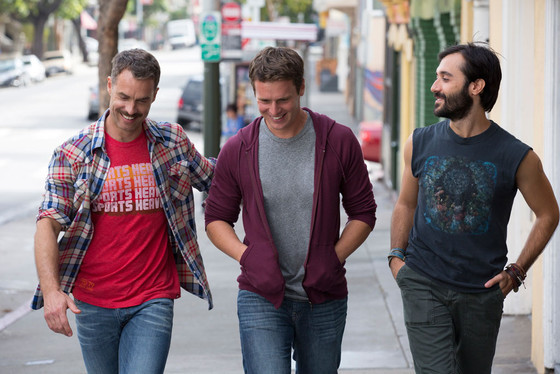 While in many forms, gay culture is nothing short of magnificent, many of us actually strive for normal, boring lives with partners and jobs and kids, free from fear that the government won't recognize our marriages or that we could possibly be fired for what is in fact our unbelievably boring lifestyle. An excerpt from Stingley's article makes an ostensibly agreeable argument:

Gays have largely been depicted in television and movies as either extremely fun and funny (Will and Grace; The Birdcage) or starkly sad and depressing (Philadelphia; Angels in America) so perhaps it's time for a Hollywood portrayal of gay life as normal, tedious, and bland. Makes straight guys seem together and interesting by comparison, though.

Yes! You're so close, Mick! Seemingly together and interesting by comparison? Is this that moment of epiphany when you realize we aren't all that different and should be treated equally in spite of everything?

And if this show really takes off, prepare yourselves for a world of boring gay men who blend in and will probably talk to you about last night's game and drink bourbon.

Actually, Mick, your fears are being realized. It really is happening! Just last week I came home from work, didn't watch any clips of Bernadette Peters on YouTube, and went to bed early (only after running the dishwasher and setting the coffee timer for the next morning). Gay men can be fabulous, and gay men can be boring, just like some days I do a kick-ass Ethel Merman impression, and other days I just want to settle for a subdued Bea Arthur (who isn't boring; she's just no Ethel). If this is the case, maybe straight men can take our place and start being a little more interesting, because it's probably blown to have lived your entire lives with not one appealing thing to say. (Now this is the part where I'm chastised for generalizing.)

I'll tell you what: You give us the same rights and protections that you have, as well as the everyday convenience of not having to think twice every time we want to hold hands with our partner in public. You teach your children not to be dicks to their gay and trans peers in school, and we'll give you some of the qualities that make us so interesting. There's plenty to go around. Some of us are happy being boring. We crave boring. It's exhausting being so damn remarkable all the time.

Overall, maybe what the author of Esquire's controversial article was trying to say is just that it's plainly a dull show. If that's the case, hey, I agree! But I actually think it was an attempt to try to be amusing at the expense of gay people who are just trying to live ordinary lives, in which case I would like to ask not only him but the rest of the straight population to refrain from treating us like society's dancing monkeys, because not all of us can dance all that well anyway.