Six months after issuing its first alert about a deadly meningitis outbreak among gay men in New York City, the Department of Health (DOH) has expanded its vaccine recommendations to include all gay men, regardless of HIV status, throughout New York City, not just in certain Brooklyn neighborhoods.

This is a change from the recommendations issued last September and discussed by Phillip M. Miner in a blog post here on The Huffington Post. Those guidelines recommended the vaccine specifically for gay men who had hooked up for sex either through gay social media (like Grindr or Adam4Adam, for example) or at a bar or party at any point since Sept. 1, 2012. The DOH said that this recommendation applied to men throughout New York City if they were HIV-positive, and to gay men regardless of their HIV status if they lived in specific Brooklyn neighborhoods, including Bedford-Stuyvesant, Brownsville, Bushwick, Clinton Hill, Crown Heights, Downtown Brooklyn, Dumbo, East New York, Prospect Heights and Williamsburg.

Now the DOH is recommending vaccination for all men living in New York City who have hooked up for sex on an app or at a bar or party, regardless of whether they are HIV-positive or HIV-negative, and regardless of which part of the city they live in.

These expanded recommendations come after four new cases of this deadly type of meningitis were reported among gay men in the first two months of 2013, bringing the total number of cases to 22, with three of the last five cases resulting in death.

As The New York Times reported on March 21:

New York City health officials are growing increasingly worried that this strain of meningitis, which is an inflammation of the lining around the brain and the spinal cord, is so insidious that it could suddenly mushroom into a major outbreak, claiming many lives before anything can be done to stop it.

Word of the new recommendations is not being spread nearly fast enough or far enough. The new DOH recommendations were issued on March 6 but took more than two weeks to hit the pages of the Times, where it was covered as a regional story, did not make the front page and was not even teased on the front page. Now that the Times has reported on the story, it is being shared on Facebook, Twitter and the blogosphere (props to Johnny-on-the-spot gay blogger JoeMyGod, who covered the new recommendations on March 7), but that's not enough.

According to the Times article:

Many of men [sic] who are at risk may not identify themselves as either gay or bisexual, even though they are having sex with other men, health officials said. So it is hard to reach out to them through gay organizations, and it is hard to get them to come forward to be vaccinated.

Well, it may be hard to reach out to at-risk men through gay organizations (which I'm not sure I buy in the first place), but it's sure not hard to reach out to them at bars and clubs and through the same social media where they (we) are hooking up. For example, right before starting to write this blog post, I edited my own Grindr profile as follows: 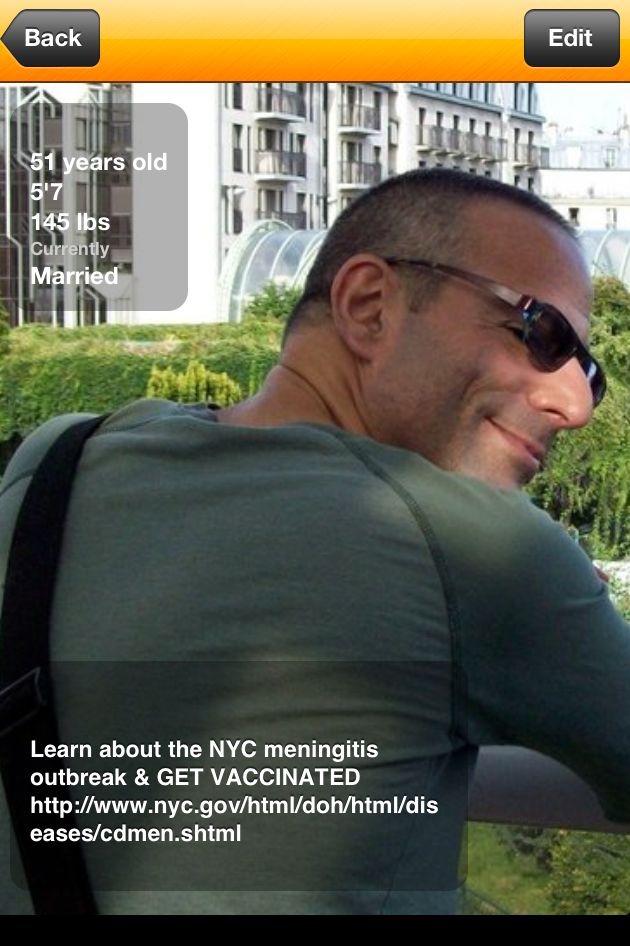 Right after I submit this post, I'll do the same on my a4a profile. You can do the same thing, on Grindr, a4a, Gay.com (you mean to tell me you're still on Gay.com?), Manhunt (come on, girl!) and any other gay social media site or app, whether it's a sex site/app or a dating site/app.

At the risk of sounding melodramatic, the AIDS epidemic, too, started with just a few cases of swollen glands, Pneumocystis pneumonia and Kaposi's sarcoma in New York, San Francisco and Los Angeles. At a time when we were feared, reviled and left to fend for ourselves, gay men in these cities and across the country mounted their own community-based responses. Gods, goddesses, fate, etc., willing, this meningitis outbreak will never come close to being a second AIDS epidemic, but gay men are dying of another new sexually transmitted infection, and although there is at least a vaccine this time, authorities are once again throwing their hands up in despair when it comes to community outreach.

We must act to protect ourselves. Do what you can to spread the word. For ease of cutting-and-pasting into profiles and blog posts, here's a link to the appropriate page on the DOH website: