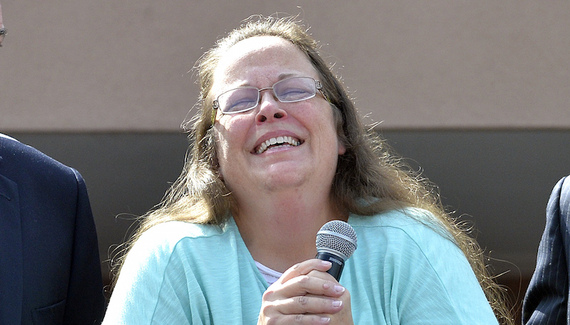 Kim Davis, the county clerk in Kentucky, who was just released from jail after publicly defying the Supreme Court's ruling on same-sex marriage says she did so "Under God's authority." As much as I want to attack or ridicule her, I can't. Because that's not the way we should deal with people who believe differently than we do.

As our nation's laws progress toward respecting every member of our society, we need to learn to speak our differences respectfully and to reject any practice, law or policy that denigrates people.

After publicly coming out to the world in my article on TheRoot.com, "I'm Black, I'm a Minister and I'm Gay", I expected some backlash but never did I imagine the attack from some in my own Christian community to be so cruel.

To bully, berate and belittle someone because their truth is different from yours only leads to continual discord in our diverse nation.

Kim Davis has every right to believe as she does. That's America; people of all colors, creeds and sexual orientations being able to express their different beliefs through the freedom of speech. But what she does not have the right to do is impede on the rights of any other American based on her personal convictions.

Refusing a right protected by the law because of your religious belief is a perfect example of how not to govern in the 21st Century. Imagine a Muslim firefighter refusing to put out a fire at a Jewish Temple or vice versa. This is why it's very important to adhere to the separation of church and state. So if religious convictions prevents someone from doing their job, especially a government official, then they should probably find another profession that aligns with their religious beliefs.

Kim Davis is not the first person to ever stand on the bible to resist change. People quoted the bible to object to things like women getting the right to vote or Blacks and Whites being allowed to intermarry. Equal rights came just the same.

I don't judge Kim Davis for holding fast to her beliefs as a Christian. Civil disobedience like hers or like some in the Black Lives Matters movement have always forced the nation to do a gut-check during times of change. They make us see that there are many issues that still need to be addressed so that every American is treated fairly under the law.

I believe that fair treatment of all Americans no matter what color, creed or sexual orientation is coming. We as a civil society must hold fast to the notion that love and acceptance of one another, despite our differences, is the only prosperous way forward for our diverse nation.