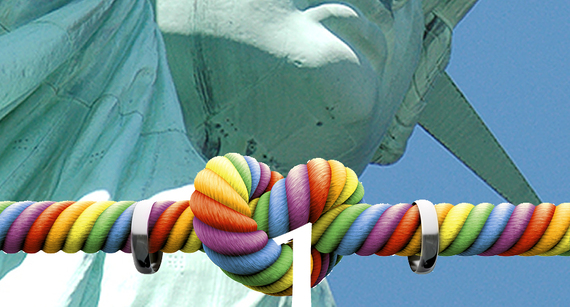 As we approach the Supreme Court of the Unites States (SCOTUS) one-year anniversary of Windsor v. United States ruling, do we celebrate or mourn this ruling? First, some facts before my open letter.

We conclude that in the field of public education the doctrine of 'separate but equal' has no place. Separate educational facilities are inherently unequal.

According to a recent UCLA report, 60 years later, we have yet to achieve the intent of the 1954 SCOTUS unanimous (9-0) ruling.

Was a landmark civil rights decision of the United States Supreme Court which invalidated laws prohibiting interracial marriage. The court ruled that Virginia's anti-miscegenation statute violated both the Due Process Clause and the Equal Protection Clause of the Fourteenth Amendment.

In one ruling, the 1967 SCOTUS vacated laws prohibiting interracial marriage across the land. End of story.

How did these first two facts help or hinder our ability to address racial equality? Did these SCOTUS rulings fuel or flatten frank discussion concerning racial equality?

Struck down Section 3 of the so-called Defense of Marriage Act [DOMA], the 1996 law that denies legally married same-sex couples over 1,100 protections and responsibilities of marriage. By striking down Section 3 of DOMA, the Supreme Court has affirmed that all loving and committed couples who marry deserve equal legal respect and treatment.

Unlike the 1954 and 1967 SOCTUS rulings, the 2013 SCOTUS ruling allowed all existing State DOMA's to stand until otherwise vacated by individual state rulings or legislation. As of this post, Michigan and Utah DOMA's are under appeal.

Fact 4: On June 26, 2013, SCOTUS also ruled on Hollingsworth v. Perry. The Court ruled that backers of a ballot measure did not have a legal right to be in court to defend the proposition. On August 14th, 2013:

Racial segregation is based on the color of a person's skin, a trait assigned at conception. A person's sexual orientation is also a birth trait. Frankly, as a gay man who grew up as the youngest of nine in a devoutly Catholic home, I don't need academic studies (such as the famous Kinsey reports) to tell me I was born a gay soul. Since puberty, I knew I was wired to fall in love with a man, not a woman.

As an out gay monk, reverend and private-practice counselor/social worker, I daily witness the impact of Windsor v. United States. In June of 2013, based on my first-hand experience, I judged our current SCOTUS-limited Windsor v. United States ruling ignorant of the harm same-sex oriented souls and parents experience daily. (Ironically, as a licensed Reverend, while I may marry opposite-sex couples in every State, at the moment I'm barred from marriage in 30 States.)

I mourn the Windsor v. United States ruling for it allowed all but one section of the federal and full individual State DOMAs to stand until vacated by court or legislative action.

Joyfully, my mourning ends as I evolve on the potential buried wisdom in the Windsor v. United States ruling. This buried wisdom carries keys to creating genuine equality regardless of sexual orientation, gender or race.

This buried wisdom requires pondering the benefits of repetitive lawsuits shining the light of strict scrutiny upon pervasive myths concerning sexual orientation, gender and racial equality. Specifically, did the 1954 and 1967 SCOTUS rulings (facts one and two above) stunt a nations' ability to address racism by an act of finality enshrined in each ruling? Each ruling mandated changes in every State. States had no choice but to take steps to end racial segregation in public schools as well as vacate race-based legal restrictions on marriage for the entire United States of America.

Does the Windsor v. United States ruling contain a silver lining, such that as each state battles to enforce or strike their unique DOMAs, we bear more light on age-old false myths related to same-sex oriented souls?

False myths like lesbians and gays don't want to get married.

False myths like same-sex oriented souls are more sexually active than the rest of society.

False myths like homosexuals recruit naive souls into their lifestyle.

What if the 1954 and 1967 SCOTUS ruled each state was allowed to set policy regarding access to public education. What if each state had to experience what 35 states are now experiencing regarding their DOMAs? Would some states opt to spend finite tax payer dollars on extensive, expensive lawsuits to legally fight to maintain racial segregation in public schools and a ban on interracial marriage?

In essence, did the Brown v. Board of Education and Loving v. Virginia ruling result in a gag-order on racism?If so, did this gag-order foster another 60 years of social bile now pouring through select congressional, cattle-rancher and sports team owners pores?

My open letter to our current SCOTUS was inspired after watching American play write Dustin Lance Black's play titled 8. Black shed light on California's Supreme Court's proceedings in the case of Perry v. Schwarzenegger, a federal trial that led to the overturn of Proposition 8. Black's play reenacted the final closing arguments of Perry v. Schwarzenegger based on actual court transcripts.

In the closing arguments of Perry v. Schwarzenegger, David Boies, the lawyer for Plaintiffs, noted how during the trial, myths concerning same-sex marriage readily used in popular media, are proven false (at time mark 50:22 in this video reenacted by George Clooney). False myths die during laser-focused strict scrutiny cross-examination.

As each state battles to maintain or vacate existing DOMAs, popular myths concerning same-sex oriented souls and their right to marry continue to both surface and die in light of public testimony. By the time every State allows marriage for all their citizens regardless of gender or orientation, the public will bear witness to similar testimony at least 35 times.

Public education racial segregation and interracial marriage requests experienced no such repetitive public trials. Did the 1954 the SCOTUS Brown v. Board of Education ruling drive racial prejudices further under ground by mandating all States comply with their ruling. Did we dig a deeper prejudiced-filled cesspool in June 1967 with the Loving v. Virginia ruling?

I close with an open letter to our current SCOTUS.

As we approach the one-year anniversary of your June 2013 Windsor v. United States ruling, did it occur to the Court the implications of remanding back to each State the responsibility to enforce or vacate existing individual State DOMAs? Did the Court consider lower court's time, expense and wear to adjudicate potentially 38 individual cases initiated by same-sex oriented souls who petition for the right to enjoy the same rights and privileges extended to legally married souls? Did the Court consider the collective billions of finite tax payer dollars state treasuries will spend defending unconstitutional laws?

Did the Court also consider the wisdom of repetition such that of 38 defendants' potential likelihood to submit popular myths as factual evidence. Did the Court unconsciously invite the United States of America the opportunity to dispel myths with hard facts when reviewed under strict scrutiny? And finally, did the Court take into consideration the likely ruling in each of these cases such that slowly, State by State, Americans would adopt facts to support all citizens to enjoy life, liberty and the pursuit of happiness (to include marriage) no matter one's sexual orientation or gender?

If your collective answer to all these questions is yes, then I bow in gratitude for your collective wisdom. If even one no answer applies to this Court, I humbly invite this Court to remember this negative response when future inequalities of any source present themselves for your ruling.