Here are salvos from a new battle: Calling a young, HIV-negative gay man a "Truvada whore" simply for choosing a prevention option with a higher efficacy rate than condoms. Becoming indignant when someone says AIDS is still a gay problem. Turning to the police when you find out the guy that just jilted you is HIV-positive. Putting "I'm clean, ub2" in your online profile. Joining digital stonings via online comment sections when a 20-something dares to come out as HIV-positive. HIV-negative guys barebacking with those who tell them they are negative and shunning the few brave ones who admit they're positive. These are just some of the examples of the new HIV war, with its gay-on-gay shaming. 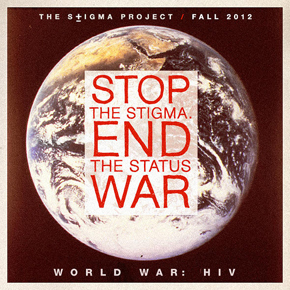 HIV-related stigma is worse than ever. Not the external kind, where a society is panicked about the new plague. Thankfully, the days of being shunned by hospital orderlies or funeral homes are over. But I'd prefer that kind of stigma over today's brand. At least I knew how to fight the external kind. Today's internal stigma, where a community shuns its own, is seemingly intractable and far more destructive.

It breaks my heart that the worst of HIV stigma comes from my own community: gay men. It wasn't always this way. It might surprise today's younger gay men to learn that there was very little HIV-related stigma between us during the early years of the crisis. If anything, I felt the opposite of stigma when I publicly disclosed my status in the late '80s. Gay men with HIV received communal love and support. Once the gospel of safe sex was firmly entrenched, even sexual shunning became rare. Maybe it was our numbers, with upwards of half of New York's and San Francisco's gay men being HIV-positive by 1985. Maybe it was because many of us couldn't hide it, as our HIV painfully manifested as AIDS. Maybe it was our communal fighting back, as we rose up against a government that was ignoring our suffering.

Regardless of the reasons, we felt like one community. We were all living with HIV, regardless of status. I realize this view is skewed. I lived in a city where the social norms were being heavily influenced by ACT UP and other community responses to the crisis. The beginnings of gay-on-gay HIV-related stigma could be easily found in other cities and towns back then. But now it seems to be the norm, regardless of location.

Now that you can take your pills and hide it, and now that we've had at least one generation of gay men who never witnessed AIDS, the sense that we're all living with HIV is long gone. A culture of safe sex, where you always presume the person you're sleeping with is positive, has been replaced with a culture of barebacking, where risk is magically reduced by deeply flawed attempts at serosorting. The flaws are hidden because HIV is now hidden, by inadequate testing, or the very crowded HIV closet in which many now choose to live.

The result is a vicious cycle where HIV-related stigma leads to more HIV while hiding its damage by instilling fear and shame in the newly infected. Their resulting silence makes HIV seem rare and avoidable, giving space for the next generation's stigma. AIDS activists have been trying to break this cycle for years now, to seemingly little effect. There have been countless ad campaigns, online and otherwise, but they fall on deaf ears. Avoiding HIV also seems to mean avoiding a discussion about HIV, turning the page, not bothering to click on a graphic or link that even hints at that plague fought long ago. The stigma protects itself.

Can anything be done to change this sad status quo? Given our now-entrenched state of AIDS fatigue, I'm beginning to think the war on HIV-related stigma is lost. By all means, let's keep fighting it, if only to keep it from getting worse. But here's the important thing: We can still win the war against HIV. Recent history offers ample evidence that persistent public health interventions can overcome remarkable levels of social resistance.

An international push to wipe out polio has yielded stunning results since 1988, when it was endemic in 125 countries. Now it's down to just three, with total elimination possible by 2018. Thanks to the leadership of the Carter Center, Guinea worm disease is set to become the second human disease in history, after smallpox, to be eradicated. The campaign against it was launched in 1986, and incidence of the disease has since dropped 99.9-percent. It will be the first disease eradicated without the use of a vaccine or medical treatment. If we can wipe out polio in India with its extreme poverty (no cases reported since 2011) or eliminate Guinea worm in war-torn Afghanistan (no cases since 2007), then we can wind down HIV incidence in the U.S.

All it takes are concerted public health interventions and the money to fund them. We have the tools to reduce HIV incidence ("treatment as prevention," or TasP; flattening the "treatment cascade"; pre-exposure prophylaxis, or PrEP; etc.); we just have to apply them. Some localities are already proving this. Washington, D.C., launched an all-hands-on-deck effort in 2006 and has shown very promising results. New HIV infections have dropped 46-percent since 2007. By all accounts, HIV-related stigma is still alive and well in our nation's capital, but they've worked around it.

We need to plow through the continued apathy, ignorance, and stigma. While the gay men who moralize and finger-wag will most definitely slow us down, AIDS activists and their public health allies will ultimately win this war. So if you're fighting the good fight and getting any stigmatizing pushback, then push ahead even harder. Give a good smack to that finger in your face, ignore the moralizing idiots online, and find strength from your allies in this fight. And know this: When this crisis is finally over, there will be two kinds of people remembered: those who fought to end it, and those who slowed us down.