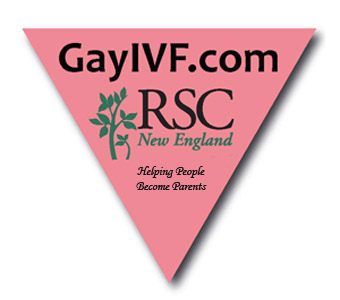 Dr. Samuel Pang is the Medical Director of the Reproductive Science Center of New England (RSC), a pioneer in helping lesbians and gay men become parents throughout the United States and Europe. Gay couples can become parents by the same assisted reproductive technologies that enable infertile heterosexual couples to have babies, and the good news is that it is possible to have your own biological child. Dr. Pang and his husband have two sons through IVF with donor eggs and gestational surrogacy. I talked with Dr. Pang about these procedures and issues facing our LGBT community.

When asked how he became involved with reproductive services for gay and lesbian couples, Dr. Pang stated:

I joined the practice in 1993 as the Associate Medical Director, and in 1997 I was appointed to be the Medical Director of the Third Party Reproduction team, which specializes in treating people who need either an egg donor or a gestational surrogate or both, to become parents. Now in 1997, all of the patients who required egg donation or surrogacy were heterosexual, but in 1998 we were first approached by a male couple who sought to become parents through egg donation and gestational surrogacy. At that time no other fertility clinic in the area would agree to provide them with assisted reproduction services, but we welcomed them immediately. Over the next five years we went on to help this couple have a total of three children through egg donation and gestational surrogacy. And in the past 15 years we have gone on to help many other male couples become parents through egg donation and gestational surrogacy. With a few rare exceptions, virtually all male couples who have gone through this process have been successful, and some have even returned to have a second or third baby. Now getting back to the reproductive services for lesbians, we have always provided donor insemination services for lesbians since our practice opened our doors in 1988. In the mid to late 1990s, I treated a few lesbian couples in which one of them wanted to conceive but was unable to do so because of ovarian failure, so her partner would provide eggs for her to conceive with, through a process that mimics egg donation. While most lesbians continue to use alternative insemination with donor sperm to have children, recently, some have opted to do what I have come to refer to as reciprocal IVF, where one partner provides the eggs, which are inseminated with donor sperm, and the other partner gestates the pregnancy. Now this is an interesting concept, because these lesbian couples are not doing it because of medical necessity but electively by choice. Because this was a new concept which didn't have a name, I coined the term "reciprocal IVF" to describe this elective IVF process. Reciprocal IVF allows both women in the relationship to be part of the process of having their child or children together.

RSC is holding an LGBT open house June 13. This is an opportunity to learn more about the assisted reproductive services provided for gay and lesbian couples, in addition to fertility preservation consultations and services for transgender persons. The open house includes a facility tour and a Q-and-A session with Dr. Pang. This event is free, but registration is required. Click here to RSVP.