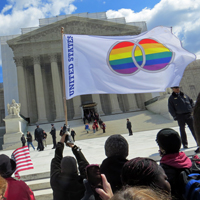 As we move through life we each leave a legacy, a personal imprint on the world. For me, an increasingly important and meaningful part of my personal story is my engagement in LGBT activism and my participation in LGBT cultural events.

I have attended four LGBT-related public protests in recent months and I am eagerly awaiting the 2013 LGBT pride parade season in New York City. Both types of events -- protests and parades -- are very empowering ways in which to participate in society and help effect societal change.

One of the defining characteristics of the LGBT community is our resilience and refusal to accept oppression. We're also known for our capacity, as a community, to put on a grand party when the situation demands it. Public protests and pride parades, respectively, play a key role in challenging discrimination against LGBT people and celebrating LGBT diversity. 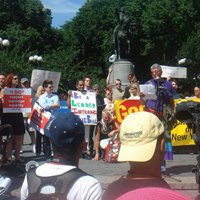 A public protest is a form of direct action whereby a group or community of people comes together, in a public manner, to express opposition or discontent about some type of unsatisfactory or unjust situation. While the aim is to communicate a message to the broader public about a given topic or issue, there is also the hope that this engagement with society will lead to positive social change.

From the historic Stonewall 'uprising' in New York City in 1969, to the HIV/AIDS protests in the 1980s/90s, through to the marriage equality rallies across the USA in 2013, the LGBT community in America has a long and rich history of publicly advocating for societal change. Through protests and collective action, the private and individual experience of discrimination is given a very necessary public stage. When the same 'private troubles' are experienced by a mass of individuals, such problems become 'public issues' requiring group level intervention (see C.Wright Mills and The Sociological Imagination). Discrimination against LGBT people is a prime example.

My foray into LGBT-activism was in 2009 in New York when efforts were being made to legalize same-sex marriage. While I had started an online campaign to promote the legalization of gay marriage in New York, I decided I also needed to participate in direct action events or 'real-world' (organic) activism as I call it. I wanted to connect with others in a more human way -- not just online -- and I wanted to be able to document these experiences for those who couldn't or wouldn't participate.

So I began attending LGBT-related political rallies in New York and started taking photos of what I saw at these events. From Equality & Justice Day 2009 in Albany lobbying state politicians, to marriage equality rallies in Queens and Manhattan, I started to get a sense of how significant and important these events were in exerting influence over broader society. While same-sex marriage was not legalized in 2009, these collective and direct action efforts certainly paved the way for future change.

By the time 2011 arrived, New York had been primed for the legalization of same-sex marriage. Various protests and rallies were held by pro-marriage equality advocates in the months leading up to the successful vote in the New York legislature in June 2011. Looking back on that period it is with a sense of satisfaction that I can say I participated in a number of these. I attended Equality & Justice Day 2011 in Albany, I photographed a rally against an anti-gay politician in Brooklyn, and I participated in two marriage equality rallies in Manhattan (Stonewall Inn rally, Union Square rally). 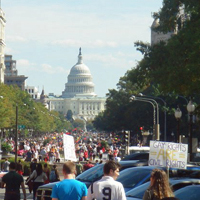 My experiences with real-world activism in New York in 2009 were accompanied by a growing desire to participate in societal change at a more national level. Attending the National Equality March 2009 was an inspirational experience in this regard. Marching together with thousands of LGBT people and our allies from all across the country in a united voice against LGBT-related discrimination was empowering and exhilarating.

After participating in New York City's inspiring 'End DOMA' rally in March 2013, I became aware of an intense desire to participate in the Supreme Court rallies that had been planned for later that month to coincide with the Prop 8 and DOMA hearings. I attended the March 27 DOMA rally in Washington DC and it was indeed an amazing experience. I will never forget the joy and exhilaration of being amongst the cheering crowd that greeted Edie Windsor (DOMA complainant) when she emerged from the Supreme Court after the hearing (see my video tribute to Edie Windsor here).

More recently, in recognition of the fact that marriage inequality is not the only issue that negatively impacts LGBT people, I've attended two protests relating to other forms of LGBT discrimination. In early May 2013 a group of LGBT Catholics and allies engaged in a vigil outside St. Patrick's Cathedral in New York City in protest of Cardinal Timothy Dolan's suggestion that LGBT people should wash their hands before entering a Catholic Church. As an observer I was on hand to photograph and document this action. This past week, in response to anti-gay violence in New York City, I attended the 'Take Back the Night' rally in Manhattan joining together with other New Yorkers in condemning homophobic abuse.

Participating in public protests and direct action efforts are not for everyone, however. LGBT people who are not 'out' to friends and family are highly unlikely to attend such events due to the potential public exposure. Others cannot break away from commitments and responsibilities such as work and family. There are also those of course who simply have no interest in participating in these types of societal actions. As someone who has the capacity and the desire to participate, I now increasingly feel a personal obligation to do so -- not only to show my personal support for these causes but to photographically document these events for those who cannot or will not attend. 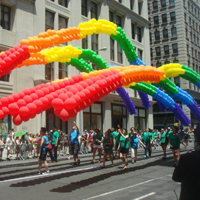 It's not just protesting and rallying, however, that the LGBT community has developed particular skill in. With roots in the 1969 Stonewall movement, LGBT pride parades are now held annually in various cities across America, all aiming to celebrate and honor the diversity and validity of LGBT identities and culture. While protests have as their starting point a need and desire to challenge something unacceptable (e.g. discrimination), parades have as their starting point a wish to celebrate something positive (e.g. human diversity).

Some people question the necessity of LGBT pride parades and reference the fact that there aren't 'straight pride parades.' Indeed, there would be no purpose for the latter because straight people are not an historically oppressed minority group. Straight people, as a group, are not subjected to violence and oppression the world over simply for being 'straight.' We live in a society which to a large extent remains structured around the erroneous assumption that all people are straight. Slowly, that is changing. It's fair to say, however, that in many places around the world each day still seems like one massive 'straight pride parade' in which the lives and culture of LGBT people are seldom featured or reflected.

In this sense LGBT pride parades aim to empower LGBT people by, firstly, acknowledging our very existence and, secondly, by celebrating our diversity and culture. Such parades are not an effort to promote separatism or to communicate any degree of superiority or inferiority. They aim simply to validate and celebrate a group of people who have historically been demonized by broader society.

My own personal experience of participation in LGBT pride parades began in 2011. Despite having lived in New York City for nearly four years by that point, I had not once attended a pride parade. With my growing interest in political activism and photography, however, I hit the pride parade scene in June 2011 and what a blast I had. It started with Queens, then Brooklyn, and then the biggest one of them all, the Manhattan pride parade. A month later, in July 2011, I was present outside the NYC Office of the City Clerk to photograph the first group of same-sex couples issued marriage licenses in NYC, a day which itself became an impromptu 'pride parade' and cultural celebration.

In 2012, hooked from the previous year's participation in pride parades, I repeated the Queens, Brooklyn and Manhattan trifecta taking hundreds of photos in the process and sharing them online across the Gay Marriage USA Facebook network.

While right-wing anti-gay conservatives hysterically argue that LGBT pride parades are simply an effort to promote some kind of 'deviant sexual lifestyle,' the truth is something very different. While pride parades feature a collection of characters in outlandish costumes who dress-up intentionally for the occasion, they also feature the participation of regular LGBT folks wearing regular clothes honoring their regular lives. Like any community or group of people, we (LGBT people) are a mixed one that incorporates the mild to the extreme and everything in between. 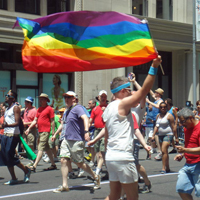 As direct action efforts advocating for the legalization of same-sex marriage continue across the country, and as the LGBT pride parade season looms on the horizon, I encourage those LGBT people who have never participated in a public rally or a pride parade to seriously consider doing so. There is something particularly powerful and meaningful about participating in these public events that literally do have the potential to change society and to change lives.

I agree that online activism is fueling a rapid change in attitudes about LGBT rights and helping to fast-track the path toward full equality, and I will continue to engage in it via Gay Marriage USA. On the other hand, our daily lives are becoming so heavily impacted by social media and online activities that sometimes it's easy to forget about the 'real world' out there, that one that has streets and people and noises and aromas.

We must continue to recognize the importance of real-world public protests and pride parades in helping to shape society in ways which ultimately benefit us all. In that regard, I will continue to find meaning and satisfaction in attending and photographing these events and playing my small part in helping to effect historic social changes. Helping to create a world which is kinder to LGBT people has become an important part of my life story and my contribution to society.