Those of us who are black and gay approach Africa with deeply conflicted feelings. On a recent trip to Zambia, along with my point-and-shoot and anti-malaria medication, I packed equal parts pride and shame, curiosity and fear.

Homosexuality is illegal in nearly 40 African countries, and in the harshest nations -- including Sudan and parts of Nigeria -- it remains punishable by death. Violence against LGBT people is common, including government-sanctioned beating, stoning and whipping. And in South Africa, the most progressive nation of the continent, lesbians are frequently the victims of brutal corrective rape, intended to "cure" them of their sexual feelings toward other women.

Zambia, while not as transgressive or dangerous as other African countries, remains problematic. Being gay isn't illegal, but homosexual acts between men are outlawed under the Zambian constitution. The day I arrived, a headline in the Zambia Daily Mail screamed "No Gay Rights." The article made it clear that gay rights would NOT be including in a new draft of the country's constitution.

Facts are one thing, but I also wanted to see -- and fee l-- for myself what it was like to be LGBT, African and out. Lundu Mazoka gave me that opportunity. An outspoken activist, he is the executive director of Zambia's small, but feisty LGBT rights organization, Friends of Rainka, based in Lusaka.

Lundu offered an intimate look at what it's like to be a gay man -- out gay man -- in Zambia.

We began with the universal queer touchstone: the coming out story. I told Lundu about my mother's evolution, beginning when I came out years ago in college. She progressed from "no daughter of mine is a lesbian" to "I love you exactly the way you are, now figure out a way to give me some grandbabies"--with only five years of screaming, threats, silence and tears.

His story was much darker. The son of a politician and a physician, Lundu, now 33, was raised in a family that belongs to the upper echelon of Zambia's society. But that didn't matter once he came out. After his father died in 2006, his family turned to traditional healers, "medicine men" of sorts, to drive the homosexuality out of him. Without a shred of self-pity, Lundu described his three days of hell, first in his house, then in a guest house and finally in the bush:

"The first day, they cut my skin in 200 places and rubbed herbs and ash in the cuts. The second day they tied me to a tree in the bush and left me there overnight. On the third day, they put me in a shallow grave wrapped in a white shroud. I know I don't have a disease, I know I'm not demon-possessed, but this is how things are done."

Lundu says his brutal, harrowing experience is not uncommon. "I have friends who have been beaten, raped and left for dead," he says.

He says he's moved past the hurt and pain, and it's clear he has put his anger and his energy into LGBT and HIV/AIDS activism. "I understand why they felt they had to do this," he says, even as he points to the many scars on his body. "I do the work I do, because of what happened to me. I don't want others to go through what I did."

He's got plenty of work to do, particularly in the area of HIV/AIDS. Zambia has the world's sixth highest rate of HIV, with 14.3 percent of the population infected with the virus. The vast majority of cases involve heterosexual transmission, though the extent of male-to-male transmission remains unclear. The country has a virtual blackout of discussion of HIV among gay and bisexual men. The country's National AIDS Council estimates that only 1 percent of cases involve MSM transmission -- a number that Lundu and others believe is grossly inaccurate. "The population that we've been in touch with is much more sizable than that," says Lundu.

The country has no HIV prevention strategy for gay and bisexual men. Kristie Mikus, the country coordinator for Pepfar, which provides $306 million in U.S. funding a year to Zambia for HIV prevention and treatment, explains it this way: "We don't have programs that target MSM. It's a taboo subject here in Zambia. We are working in a country where it is illegal and trying to be respectful. It's a challenge."

What can we do? Tread carefully. When Westerners interfere too much, it never turns out good. Too many Zambians believe that "muzungu" (the Zambian equivalent of gringo) brought this gay mess into Africa. Not true, obviously.

Lundu says the best way to help is to listen. "Let us tell our stories," he says. You can find Lundu on Facebook or follow him on Twitter, @lmazoka. He'll also be in Washington D.C. this week for the International AIDS Conference. If you're around seek him out and share stories. 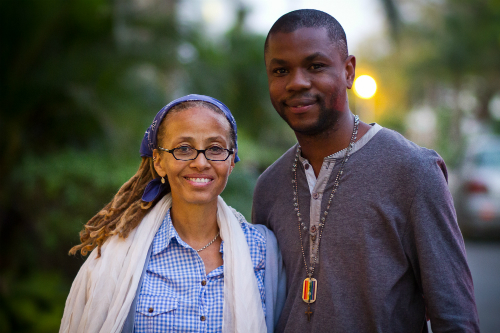 Linda Villarosa runs the journalism program at the City College of New York. She writes frequently about health issues and traveled to Zambia with the Global Fund to report on HIV/AIDS.