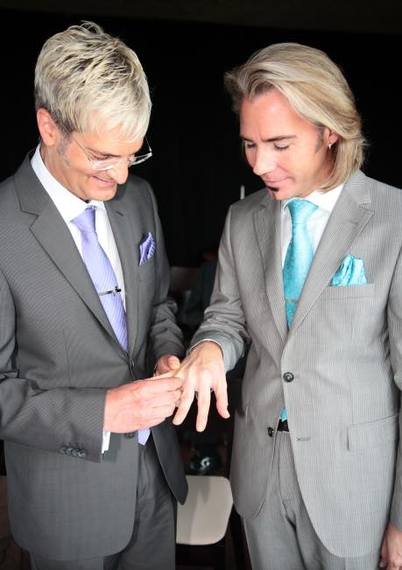 My friends Jürgen and Heiko, whom I met through my German wife Jennifer, wed in Germany.

In many European countries same-sex marriage is non-controversial. How long will it take for America to catch up to Europe's respect for human rights? Not long, because the arc of the moral universe is bending toward justice for gays and lesbians faster than any moral rights revolution in history, as evidenced this week in Indiana.

The collision between "religious freedom" laws that allow discrimination against targeted groups like gays and the expanding moral sphere that has led to more tolerance over the past half century were on display in Indiana and elsewhere this week. The fact that the issue involves "religious" freedom tells us the source of those who still resist the right for everyone to be treated equally under the law, and for all people to enjoy the fruits of liberty as protected in the Constitution.

Religion. It is religion more than anything else that keeps people from wanting others to have the same rights as they do. It is religion that needs reform, and along with it religious people's attitudes toward others who differ from them. Note the words of Martin Luther King's daughter Bernice King, a Baptist minister: "My father did not take a bullet for same-sex marriage."

It takes religion to get someone to speak such words that, in fact, contradict those of her father, as noted in this quote from Coretta Scott King:

"I still hear people say that I should not be talking about the rights of lesbian and gay people and I should stick to the issue of racial justice. But I hasten to remind them that Martin Luther King Jr. said, 'Injustice anywhere is a threat to justice everywhere.' I appeal to everyone who believes in Martin Luther King Jr.'s dream to make room at the table of brother and sisterhood for lesbian and gay people."

Since Saturday (April 4) marks the anniversary of the assassination of Martin Luther King, Jr., and last month was the 50th anniversary of King's famous march from Selma to Montgomery, here is a brief summary of that momentous event and what it means for us today, from the Prologue to my new book, The Moral Arc: How Science and Reason Lead Humanity Toward Truth, Justice, and Freedom. 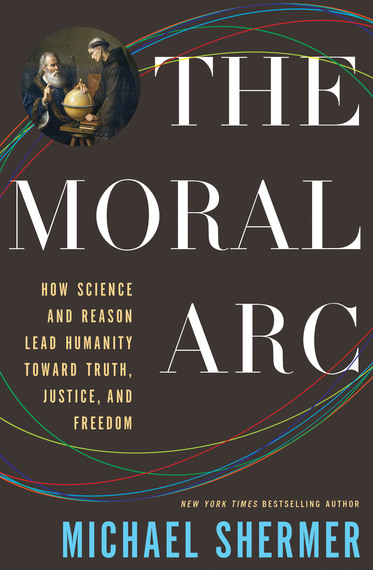 On Sunday, March 21st, 1965, about 8,000 people gathered at Brown Chapel in Selma, Alabama and began a march to the capitol building in Montgomery. At the front of the crowd was the Reverend Dr. Martin Luther King Jr., and they were marching for one reason. Justice. They wanted simply to be given the right to vote.

They had tried to march twice before, but were met with tear gas, billy clubs, and rubber tubing wrapped in barbed wire. And both times they were forced to turn back. But not this time. This time President Lyndon B. Johnson ordered 2,000 National Guard troops to protect the marchers. And so for five days, over a span of 53 miles, through biting cold and frequent rain, they marched. Word spread, the number of demonstrators grew, and by the time they reached the capitol building on March 25, their numbers had swelled to at least 25,000.

From the back of a flatbed truck parked in front of the steps to the state capitol Dr. King delivered his stirring anthem to freedom. He asked, rhetorically, "How long will prejudice blind the visions of men, darken their understanding, and drive bright-eyed wisdom from her sacred throne?" And "How long will justice be crucified and truth bear it?" In response, Dr. King offered words of counsel, comfort, and assurance, saying that no matter the obstacles it wouldn't be long before freedom was realized because, he said, "truth crushed to earth will rise again," "no lie can live forever," and "the arc of the moral universe is long, but it bends toward justice."

It was one of the greatest speeches in the history of public oratory. And it worked. Less than five months later, on August 6th, 1965, President Johnson signed the voting rights act into law. It was just as Dr. King had said--the arc of the moral universe is long but it bends toward justice.

Does it still bend in the right direction? It's hard to watch the news and not think otherwise, but as President Bill Clinton cautioned in a recent speech, we should follow the trend lines, not the headlines.

When we do so we can see improvements in the domain of morality evident in many areas of life. Governance: the rise of liberal democracies and the decline of theocracies and autocracies. Economics: broader property rights and the freedom to trade goods and services with others without oppressive restrictions. Rights: to life, liberty, property, marriage, reproduction, voting, speech, worship, assembly, protest, autonomy, and the pursuit of happiness. Prosperity: the explosion of wealth and increasing affluence for more people and the decline of poverty worldwide. War: a smaller percentage of people die as a result of violent conflict today than at any time since our species began. Slavery: outlawed everywhere in the world. Homicide: rates have fallen precipitously from over 100 murders per 100,000 people in the Middle Ages to less than 1 per 100,000 today in the Industrial West. Judicial restraint: torture and the death penalty have been almost universally outlawed by states. Judicial equality: citizens are treated more equally under the law than any time in the past. And civility: people are kinder, more civilized, and less violent to one another than ever before.

What is the cause of this moral progress? Most people associate it with religion, but in fact I believe that most of the moral development of the past several centuries has been the result of societies moving toward more secular forms of governance and politics, law and jurisprudence, moral reasoning and ethical analysis. Over time it has become less acceptable to argue that my beliefs, morals, and ways of life are better than yours simply because they are mine, or because they are traditional, or because my religion is better than your religion, or because my God is the One True God and yours is not.

It is no longer acceptable to simply assert your moral beliefs; you have to provide reasons for them, and those reasons had better be grounded in rational arguments and empirical evidence or else they will likely be ignored or rejected.

Historically, we can look back and see that we have been steadily--albeit at times haltingly--expanding the moral sphere to include more members of our species as legitimate participants in the moral community. The burgeoning conscience of humanity has grown to the point where we no longer consider the wellbeing only of our family, extended family, and local community; rather, our consideration now extends to people quite unlike ourselves, with whom we gladly trade goods and ideas and exchange sentiments and genes, rather than beating, enslaving, raping, or killing them.

Gay rights and same-sex marriage is a prime example. A decade ago almost everyone was against it. A decade from now virtually everyone will be for it. And we will look back at our current debates like we now reflect on the inanity of arguments from decades ago in favor of black-and-white drinking fountains and against interracial marriage.

We have many social and moral problems left to solve, to be sure, and the direction of the arc will hopefully continue upwards long after our epoch so we are by no means at the apex, but there is much evidence to support the fact that Dr. King was right--the arc of the moral universe really does bend toward justice.