Defying recent efforts to demonize and penalize openly gay teachers, Matt Tratner, a beloved teacher and guidance counselor at New York's prestigious John Bowne High School, went to work today wearing a shirt that boldly states "OUT And I'm not alone." He then posted a photo of himself wearing the shirt on Facebook with the caption

The posting immediately attracted massive support, including mine. By the end of the day, Tratner changed his status on Facebook to say

A little after 3pm today, after classes were over a few teacher came over to me to tell me what they thought of my OUT SHIRT I had worn to school today... They said that they had heard all about Tratner wearing it. They asked where they could get one so they too could wear them at school- gay and straight teachers asked to have one. I was never so proud to be OUT 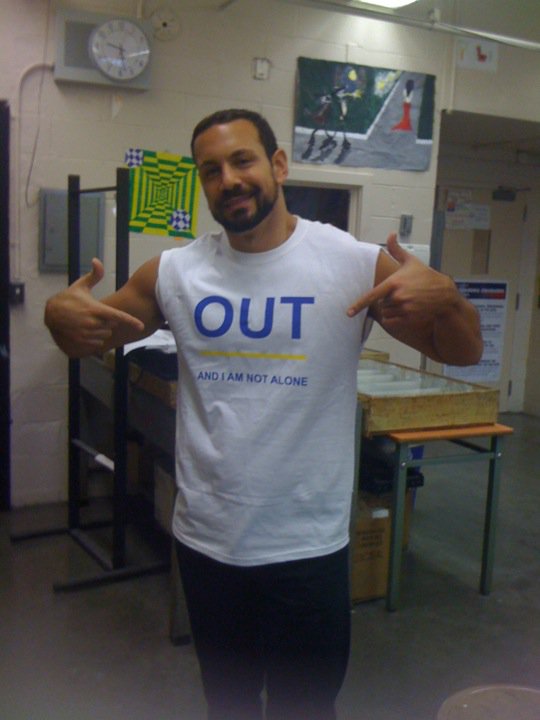 Recently, gay teachers have come under attack in ways reminiscent of how John Briggs and Anita Bryant framed the Save Our Children campaign in the 1970's. Last month, when the nation's attention was fixated on anti-LGBT bullying and teen suicides, Senator Jim Demint proclaimed that sexually active gays and lesbians shouldn't be allowed to teach. In Oregon, a teacher was fired because he responded to a student's question about why he was single by saying the law didn't allow him to marry a man.

Gay teachers are not an issue. They are a fact, just like straight teachers are. Tratner's shirt is inspiring because it confronts those who would like to turn back the clock to a time when the very existence of homosexuality was being challenged on a daily basis and when gay professionals, especially teachers, hid in the closet, which we've come to recognize as a deadly place.

Tratner's shirt is also inspiring because it speaks truth to power when others, who should be speaking have been silent. The President has been confronted on his silence about this and a number of other LGBT issues and has refused to use his bully pulpit speak out about it. The teacher in Oregon got fired and Jim Demint got away with his comments because in the year 2010 this country still tolerates the lie that gay teachers lack integrity and that they corrupt the morals of young people. The President has a bully pulpit that he can use to change attitudes and to speak out about injustice. He should be speaking out for the integrity of LGBT professionals, and the need to enact the Employment Non-Discrimination Act. ENDA was supposed to be voted on in 2009. Now it looks like it might not be introduced before 2013 at the earliest. But even if it can't pass now, the President has to speak out against discrimination against LGBT people and set the tone so that it can pass when it does come up. He can't just let hate sit out there and fester.

Tratner doesn't have to worry about professional retribution for being out at work or wearing a t-shirt. In New York, unlike the United States, it is illegal to discriminate against someone in employment because of his or her sexual orientation. But the fact that he can do this while in other parts of this country he would be fired instantly only highlights the fact that the President has a lot of leading to do. Mr. President, are you listening?

UPDATE: Tratner reports he did not have exposed arms in class. He wore a Mr. Rogers sweater over the shirt. He posed for the photo before working out.