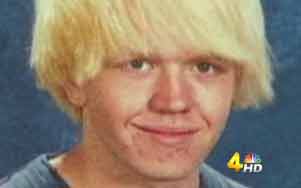 Another kid has been bullied into killing himself. His name is Jacob Rogers. He went to Cheatham County Central High School, in Ashland City, Tenn. Apparently he'd been being pretty severely bullied for four years. It got so bad that around Thanksgiving he quit going to school.

A friend of Jacob's told reporters, "He started coming home his senior year, saying 'I don't want to go back. Everyone is so mean. They call me a faggot, they call me gay, a queer.'"

Yesterday Jacob took his own life.

You can read more via MSNBC. (An important detail not mentioned in that MSNBC story comes from from KingstonSprings.org: "Dr. Tim Webb, Director of Cheatham County Schools [said] that his almost all-new staff at the high school only knew of one incident of bullying and confronted the accused over the bullying. However, Dr. Webb also noted that because staff were new to the school, they were perhaps not aware of the extent of bullying that Jacob had endured in years past.")

I've done a fair amount of writing on these sorts of tragedies (see this past Saturday's "Tell Me, Christian, That You Hear this Boy," "Christians and the Blood of Jamey Rodemeyer" and "My Gay Christian Cousin Committed Suicide," to name just three). And so I have no doubt that some will claim that the primary reason Jacob killed himself is not because he was bullied. They'll say that we don't know the whole story. They'll point to the fact that Jacob lived with his grandmother, that his family is poor (not, God knows, that poverty is any sin) -- that it's safe to assume this kid had problems beyond being bullied.

And I will respond with what I always say: that certainly there are always myriad causes behind the suicide of any person. But that that does not alter the fact that the root cause of tragedies like the Jacob Rogers story is that strain of Christianity that continues to insist that homosexuality is an evil affront to God.

If Christians would actually read the Bible, instead of daring to insist that three or four isolated phrases within it justifies a theology that has no more to do with Christ than Fred Phelps has to do with Welcome Wagon, we would arrive at a popular Christianity that is not, as so much of our Christianity is today, a pure affront to anyone with half a conscience.

And I will respond with what I always say: that certainly there are always myriad causes behind the suicide of any person. But that does not alter the fact that the root cause of gay teens being bullied because they are gay (whether or not they actually are) is that strain of Christianity which continues to insist that homosexuality is an evil affront to God.

And that Christianity would dissipate the motivation of those kids who bully in the name and spirit of condemning homosexuality. That particularly noxious train would simply come to a halt. Because there wouldn't be left any enduring reason for anyone to ever condemn gay people at all.

Then gay people would just be ... people. You know: that thing God made in his own image.

Fellow Christians: will you please stop treating the Bible like it's a permission slip from God to be just as ignorant and immoral as your scared little self wants to be-and to raise your children to be just like you?

If not, then be sure to buy a new Bible every year. It's a lot easier than having to keep washing the blood off your old one.