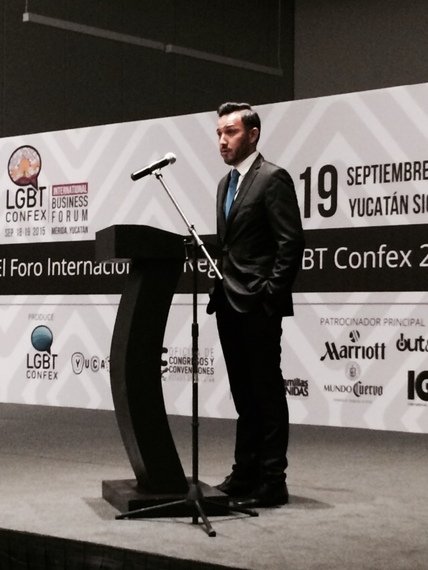 As attitudes about LGBT rights and same-sex marriage evolve, so too does corporate strategy about how to address this increasingly visible market. Trends in LGBT business practices -- as well as social and political trends -- were hot topics during LGBT Confex, Mexico's largest international business forum, which celebrated its fifth annual convention this year in the city of Merida, capital of the state of Yucatan.

Apoorva Gandhi, vice president for multicultural affairs at Marriott International, told delegates -- who gathered at the Siglo XXI Convention Center for the conference -- that businesses must provide an inclusive and positive workplace in order to create an equally welcoming environment for customers. "Take care of employees so they can take care of guests," he advised. "It's not enough to say 'we love gay people' but then turn around and treat employees differently."

Selisse Berry, founder and CEO of Out & Equal, applauded continuing progress toward equality for the LGBT community, but noted that the final goal hasn't yet been reached. "We have lots to celebrate, and we have a lot of work to do."

Araceli Ramos, director of promotion and public relations for Jose Cuervo, gave a lively presentation with lots of statistics to support why companies like hers are paying more attention to LGBT travelers and consumers (Jose Cuervo operates Mundo Cuervo, a Tequila-oriented attraction in the state of Jalisco, birthplace of Tequila). "The World Tourism Organization says that the LGBT segment is growing 10 percent every year, while the [mainstream] segment is growing 4.7 percent," she said, adding that, for the tourism market, the LGBT segment "is the greatest investment and target at this moment."

Ruben Sandoval, CEO of LGBT Confex said that Mexico is increasingly LGBT-friendly in the business sector. "There is greater visibility because of the civil rights that are being won in this country," he said during a video interview I did with him in Spanish. "Businesses and destinations are preparing for this segment; they're training and they're sensitizing themselves to it. It's not just about placing an advertisement; it's about what you do internally and how you treat your employees."

Business Beyond Mexico
The setting of LGBT Confex in Merida -- and the presence of industry folks from around Mexico -- assured that there would be much talk about that nation's evolution for LGBT travelers and the general public. But the list of attendees and speakers was decidedly international, allowing time to focus on a variety of topics (I gave attendees a peek into the world of journalism and how businesses can use journalist techniques and relations to build their own brands, with a presentation called "Content is King: How to Think Like a Journalist, Master the Media & Boost Your Business" -- I also covered the conference on my Latin America travel blog, LatinFlyer.com).

Increased attention on the transgender market -- the "T" in the phrase "LGBT" -- was the focus for a presentation made by Richard Gray, managing director for the LGBTQ market at the Fort Lauderdale Convention and Visitors Bureau. "It is in our interest to raise the bar for transgender inclusion," he told delegates, highlighting the results of a recent poll of 700 transgender travelers. The survey provides insight into the travel preferences and tendencies of the transgender market. Among the findings:

• 54 percent of respondents are budget conscious, seeking good deals when they travel.

• 48 percent are motivated by cultural experiences.

• Safety is a major concern for transgender travelers.

Next year's LGBT Confex will take place in October at the World Trade Center in Mexico City.