For the second time in as many days, protesters targeted the office of the president demanding that the White House take quicker action to repeal Don't Ask Don't Tell.

A day after the president himself was screamed at by protesters during a fundraiser in California, a group of military-veteran activists handcuffed themselves to the northern gate of the White House, in silent protest of a policy that prohibits gays from serving openly in the army.

Lt. Dan Choi was the only one of six lesbian, gay, bisexual and transgender (LGBT) discharged veterans to make a statement on Tuesday morning. Standing with his arms locked behind him, the still-active reserve member (who has become, in many ways, the face of the DADT repeal effort), called on Obama "to take bold action, to show firm resolve and real leadership" and "to make good on [his] promise" to repeal DADT.

"[H]e has the opportunity to transmit to Congress, through the Defense Authorization Bill, the repeal language," said Choi, who was arrested in a similar protest weeks ago and is awaiting a hearing for that arrest this Monday.

At one point during the protest, White House Press Secretary Robert Gibbs walked through the crowd and was reportedly yelled at to support DADT's repeal.

Choi was joined in the protest by Capt. Jim Pietrangelo II, Petty Officer Larry Whitt, Petty Officer Autumn Sandeen, Cadet Mara Boyd, and Cpl. Evelyn Thomas, in an event that was orchestrated by GetEQUAL.org, a new LGBT activist organization. The same group was behind the protests at Obama's fundraiser in California on Monday evening, in which the president was interrupted on multiple occasions over his failure to move swiftly on DADT repeal. 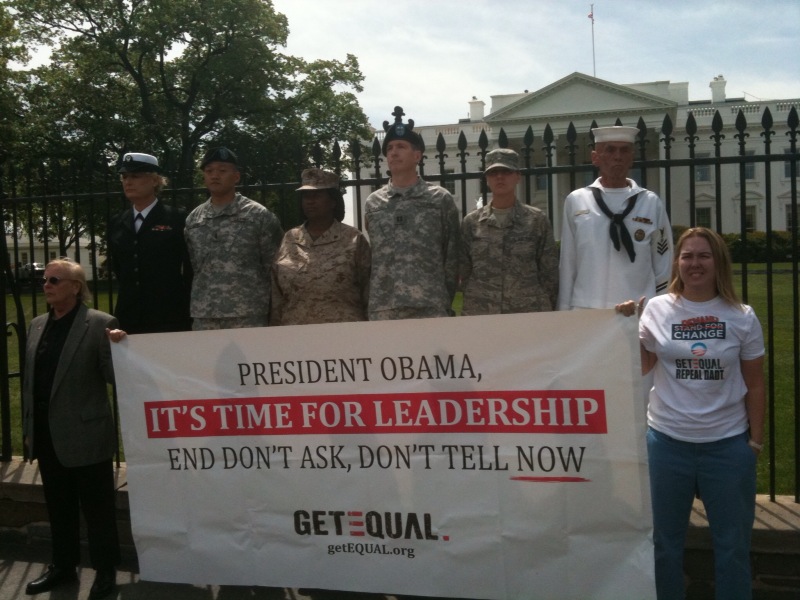 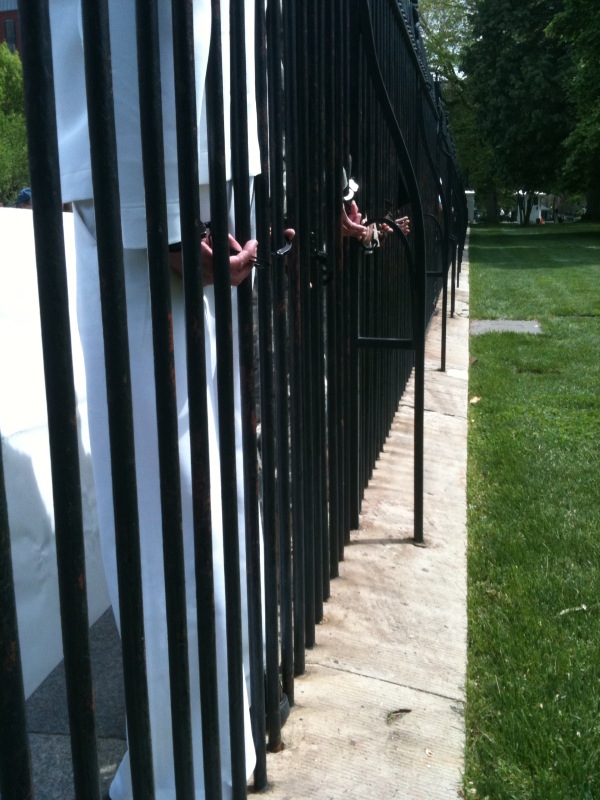 "We were here over 30 days ago demanding that the president add repeal language into the Defense Authorization bill," said Robin McGehee, the co-founder of the organization. "He has not shown leadership to do that as of this time... [And] we don't believe that you need to be delaying the service members who are suffering under this policy any longer."

Asked whether Monday and Tuesday's protest was a harbinger of things to come, McGehhe, replied: "Absolutely. In our opinion we need equality all across the United States for all LGBT Americans. Service members are one group of people who are treated unjustly, but there are people who suffer..."

The group of six protesters, adorned in their military uniforms, approached the White House closely at noon, after which they very casually chained themselves to the fence. Standing in silence for several minutes, Choi offered his statement. They then stood silently once more as the Secret Service cleared the area around them.

Roughly 45 minutes in, Secret Service agents began cutting off the protesters' handcuffs and placing each member into a police wagon. By 1 o'clock, everyone had been removed from the fence and reporters dispersed.