Conservatives always seem to get a rise out of gay marriage and while attempts to legalize it in California have fallen limp (for now), leave it to a pair of creative, industrious lesbians to pave the way for rethinking marriage, in general.

Artists Annie Sprinkle and Elizabeth Stephens, who became a couple earlier this decade and were legally married in a same-sex wedding ceremony in Canada in 2007, seem to be asking: Shouldn't marriage be considered "art?" (As in an art project?)

Judging by what the duo have engaged in over the past six years, the answer seems to be: Hell Yes!

Sprinkle and Stephens, both artists and educators -- well, and environmental activists, too -- are in the thick of a seven-year art project dubbed Love Art Lab, which finds the couple exchanging vows to each other annually in intriguing performance art ceremonies that often bring a community of creative souls -- and onlookers -- together. Each wedding event has a theme and a color/chakra scheme. This year, year six, is devoted to the color purple -- the two woman will marry each other (symbolically) to the moon. But other ideals are explored here. The color purple represents the sixth chakra and the artists hope to illuminate the importance of intuition.

In their artists' statement this year, they note that they invite everyone to "share our practice of loving the Moon and the Mountains romantically in order to create more intimate relations with them" and "aim to activate a network of global citizens, artists, activists, sexologists, spiritual practitioners, academics, local folk, family and others."

Bottom line: This is not your father's "Purple Mountain Majesty."

But it's destined to be majestic. The big event takes place in the early evening Saturday, Oct. 23 at Farnsworth Park Amphitheater in L.A. It will be officiated by the enlightening attention-grabber Reverend Billy with the Church of Life After Shopping Choir on hand.

I participated in 2008's Green Wedding up at the UC Santa Cruz campus in California. The grand event had an environmental theme and seemed to further push these ladies into going beyond the issue of gay marriage, but to explore the state of the environment. On a deeper level, they are exploring how their union/love/commitment to each other can be used as a springboard for activism and creating a positive ripple effect in the world.

Needless to say, their efforts never cease to turn heads.

In fact, just last week, the couple faced some unexpected drama when the deputy director of the L.A. County Parks and Recreation Department called them to inform them that their Farnsworth Amphitheater rental contract (in Atladena) had been cancelled. Shocked, the pair felt it was a direct response to the gender of the "brides," and the environmental activist themes of their vows.

No worries. Reverend Billy, who is officiating this purple wedding, came to the rescue. "It is bad enough that same sex marriage is illegal in California but now even the performance of a same sex marriage is called un-safe," he commented upon hearing the news. The Rev and his wife Savitri D. consulted their own legal team to help the brides.

In the meantime, a few more lovely things to note about what, I feel, has to be one of the most inventive, titillating, ecosexual-civil rights estrogen parades to penetrate modern culture in decades: The video below gives you a better glimpse of the artists' causes. Below that, dive into a slideshow weddings from year's past (Photos courtesy of Annie Sprinkle and Beth Stephens)

To learn more or to become part of the artists' causes, visit this kickstarter link.

PHOTO GALLERY
The Weddings of Annie Sprinkle and Elizabeth Stephens
Download
Calling all HuffPost superfans!
Sign up for membership to become a founding member and help shape HuffPost's next chapter
Join HuffPost 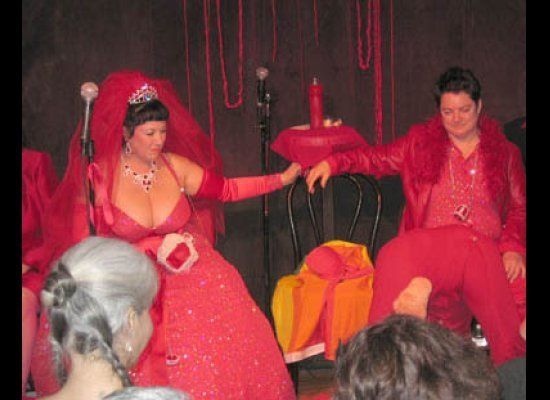 1 / 7
2005: The RED Wedding
In 2005, Annie Sprinkle (left) and Beth Stephens begin a seven-year art project dubbed "Love Art Lab," which finds the two partners getting married each year in performance art ceremonies. Each year, each wedding, has its own theme and color.