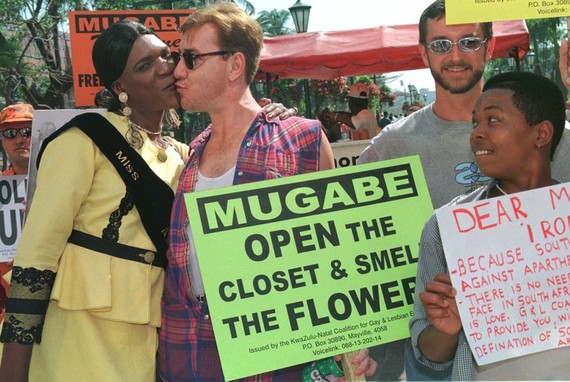 In 2006, Huffington Post columnist Danny Miller stated that "gays are the new Jews". He asked if our ability to accept people who are different from ourselves had plummeted to dangerous levels.

The world since then has altered substantially: for better, there was the historic Supreme Court decision to legalise same-sex marriage across the US last year. For worse, lesbian, gay, bisexual, transgender, intersex (LGBTI) persons are facing new, unprecedented legal and social challenges in Russia.

Furthermore, Amnesty International maintains that "the continued criminalisation of consensual same-sex conduct in 38 African countries is a serious cause for concern ..."

In Uganda, a bill, first submitted in April 2009, would have made "aggravated homosexuality" a capital offence. It is defined as repeated homosexual acts, gay sex with a minor or someone with disabilities, or when one partner has HIV. Because it provoked an international outcry, the death penalty was revised to life imprisonment. This would allow the "rehabilitation" of gays.

South Sudan and Burundi are not far behind. Nigeria and Liberia introduced bills respectively in 2011 and 2012 to toughen penalties for same-sex relations and sexual conduct. Mauritania, northern regions of Nigeria, the southern region of Somalia and Sudan retain the death penalty for the same.

I maintain that the role of the mainstream media in these 38 so-called democracies has been inverted. It now fulfils the exact opposite role of what a healthy and vibrant media should play in a healthy democracy: that of the Fourth Estate.

Zimbabwean President Robert Mugabe is notorious for his "gays and lesbians are worse than pigs and dogs" comment in 1995. He has repeatedly claimed that Europe is trying to force gay rights on Africa.

Mugabe's opinion - that "what is natural is made unnatural. And what is unnatural they want to say it is natural [...] let Europe keep their homosexual nonsense there" - is laced with irony. It is not the "homosexuals" who are unnatural, but the so-called "democracies" of these countries, and their mainstream news media. They engender horrifying class, sexuality and gender inequalities via state-sanctioned homophobia in Africa.

In contrast, the social media platform Twitter has scored winning goals in the face of the mainstream or "dominant" media of these African nations' abysmal, shameful own goals.

Furthermore, the ideal media in a democracy should represent diverse voices and positions in debates, reflective of media theory prior to the emergence of social media and the internet. Twitter, meanwhile, has usurped this role where the media has been corrupted in the less than ideal circumstances of these 38 African countries.

Twitter as the democratiser also provides a counterbalance to the mainstream media. The latter often represents the voices of the elites and the issues of the elites, according to media analyst Edward Herman and public intellectual Noam Chomsky. Twitter, instead, reflects many and varied voices.

Twitter offers an alternative voice to the influence of American right-wing Christians on the drafting of anti-gay bills on the continent. It also provides that voice when political opportunism contravenes human rights.

Journalist Alexis Okeowo has pointed out that

There is no toeing the line in the Twitterverse. That has resulted in attempts at literally pulling the plug. It happened in March 2014 when Turkish Prime Minister Recep Tayyip Erdoğan restricted access to Twitter.

There was a similar situation in Uganda when citizens went to the polls in February 2016 in heavily contested presidential and parliamentary elections. They discovered that their access to social media and mobile payment services had been cut off. It was part of a four-day ban by the government that limited political discussion. Financial transactions were also temporarily halted across the country.

The power to change opinion lies within the democratic Twitterverse. While it simultaneously contains homophobic statements and other instances of hatred, it offers the potential of balance. There one finds a wide and disparate variety of opinions and pluralist debate. That is unlike the one-sided and controlled, mainstream, state-sanctioned media in repressive societies.

In "Exploring Empathy: Its Propagations, Perimeters and Potentialities", a book to be published later this year, Dr Nic Theo argues that journalists should strive to "incorporate narrative frames of engagement which represent people beyond the identity-based categories of 'the homosexual', thereby giving them a voice as complex individuals".

This is possible on Twitter. Not only does the "victim"/source of the story have a right to reply, but it is not via the gatekeeper-journalist nor his or her media organisation. It is directly and unhindered to Twitter's timeline, which is a democratic and open space that can only be limited - and rarely so - by Twitter itself.

Source of the power

The source thus takes her power back and is then again the master of her own destiny. This reveals these sources to be complex individuals rather than the often one-dimensional and voiceless "victim"/sources of traditional media stories, where the journalist is in power.

It is particularly important for non-journalists to understand that they have as much and as equal access to a democratic, complex and unlimited international communication platform as any journalist. They have the right to be heard. They can tell their own stories. They can fill in the blanks. They are empowered to also call the journalist out publicly if required.

Once they have made the mind shift to move from "victim"/source in someone else's narrative to become the powerful narrator of their own story, they are able to garner empathy for themselves. With that they can garner assistance, guidance and resources from those who also have empathy for them.

It is at that point that Twitter ceases to be a lonely, isolating space.