To ignore the role of Israel's occupation of Gaza is to ignore the fundamental fact needed to frame the latest escalation in reality rather than rhetoric and propaganda.

To do otherwise flagrantly falsifies the reality of the ongoing humanitarian crisis on the ground in Gaza.

The reality is complicated; mired in corruption, haunted by division, but ultimately a product of obscene oppression. So obscene that many, namely Israel and the U.S., would rather pretend it simply was not true -- not real -- but it is.

In October, after a three-year battle by Gisha, an Israeli human rights group, Israel was forced to disclose its so-called "Red Lines" document. No, not that cartoon/drawing Netanyahu made at the United Nations over Iran's nuclear program -- this was a document drafted in early 2008 that provided a calculation of the minimum number of calories needed by Gaza's 1.5 million inhabitants to avoid malnutrition and widespread starvation.

And yet Israel claims it no longer occupies Gaza.

The health ministry of Israel determined at the time that Palestinians in Gaza needed an average of 2,279 calories each to avoid malnutrition. To meet that number, Israel would need to allow 170 trucks of food a day inside Gaza. However, despite the study, less than half of the minimum amount required was actually allowed to enter Gaza daily. Before the blockade, Israel allowed 400 trucks through, by comparison.

When Israel withdrew its troops from Gaza in 2005, it claimed that this was the end of Gaza's occupation. But this report is one of countless examples of Israel's punishment of Palestinians living in Gaza, and one that must be included in order to put into context Israel's latest offensive.

On November 17, Israeli strikes damaged a UN-run school next to the Civil Department of the Ministry of Interior building in Gaza City's Tal al-Hawa neighborhood. This photo was taken by @annepaq, a French photographer who has been based in Palestine for years.

On the very same day, Israel's official Twitter account @IDFSpokesperson tweeted a link to a video hosted on their official YouTube channel, featuring an animated film that depicts militants firing rockets from a school clearly marked with UNRWA insignia.

The UN agency denies the allegations made that suggest that Palestinian militants are using UNRWA schools or facilities in Gaza to fire rockets into Israel.

I have actually never been to Gaza. But everyone I know that has comes back convinced that ending occupation is fundamental to resolving the conflict because it is fundamentally the problem -- even if it is ruled by fundamentalists that were democratically elected in 2006.

Frankly, I do not support Hamas' ideology or system of governance, but Hamas does not constitute all of Palestinians. I support the human rights and dignity of Palestinians, not simply because I am one, but because all humans deserve to live in dignity.

What is most frustrating about the images of destroyed buildings, dead babies, and grieving families from Gaza circulating on social media is the reminder of the cyclical nature of the conflict and Israel's offensives -- the perpetuation of the status quo, which for too long has been facilitated by the shared policy of Egypt, Israel, the United States and many other allies.

But reports from Gaza, whether online or on TV, also point to what is different this time around.

In December of 2008, when Israel-launched a 22-day attack on Gaza that left more than 1,400 Palestinians dead, I was living in Beirut at the time and glued to Al Jazeera, the only English-language news network with journalists on the ground.

Fortunately, this time around, the world isn't relying just on "Ayman and Sherine".

Al Jazeera's Ayman Mohyeldin (now NBC Foreign Affairs Correspondent) and Sherine Tadros had an unfortunate exclusive on the story as Israel and Egypt sealed the borders during the conflict and the two happened to be on the inside already. I was so moved by their bravery, professionalism and reporting that I felt compelled to write about it.

But today, as Ayman says, it is a"completely different dynamic." In 2008, he said, "there was a dearth of information and pictures... we couldn't be everywhere at the same time."

Their coverage was exceptional, but as Sherine herself wrote on The Huffington Post, "Now, Gaza is under the microscope, whether via social media, print, radio, TV -- there is no ignoring what is raging within."

Twenty-year old cameraman Khader al-Zahhar had his right leg blown off when a rocket shot through the roof of one of the buildings.

The timing of these attacks on journalists is also significant.

This is the trouble with Israel's social media and PR efforts: they conveniently omit the facts that matter. Under the Geneva Convention, targeting journalists or civilians is considered a war crime.

But Netanyahu spokesman Marc Regev appeared on Al Jazeera this week and tried to blame the journalists themselves for their deaths, questioning whether Palestinian and local journalists should be considered journalists and insisting that the strikes on the building only hit and affected the roof.

Despite calls on Sunday from the Committee to Protect Journalists and Reporters Without Borders for Israel to stop targeting facilities housing media organizations and journalists immediately, on Monday, Israel struck media offices in several buildings again. And again on Tuesday, an Israeli missile struck a car and killed three journalists from the local Al Quds TV station.

A feeling of powerlessness and hopelessness is inevitable among those suffering in Gaza, but many of us watching from afar continue to taste it too. The political divisions between Fatah and Hamas are sharp enough to cut rope that unites Palestinians and their right to freedom, dignity and self-determination. But it is oppression and occupation that continues to bleed Palestinians dry.

"Even a single night in jail is enough to give a taste of what it means to be under the total control of some external force.

And it hardly takes more than a day in Gaza to begin to appreciate what it must be like to try to survive in the world's largest open-air prison, where a million and a half people, in the most densely populated area of the world, are constantly subject to random and often savage terror and arbitrary punishment, with no purpose other than to humiliate and degrade, and with the further goal of ensuring that Palestinian hopes for a decent future will be crushed and that the overwhelming global support for a diplomatic settlement that will grant these rights will be nullified." 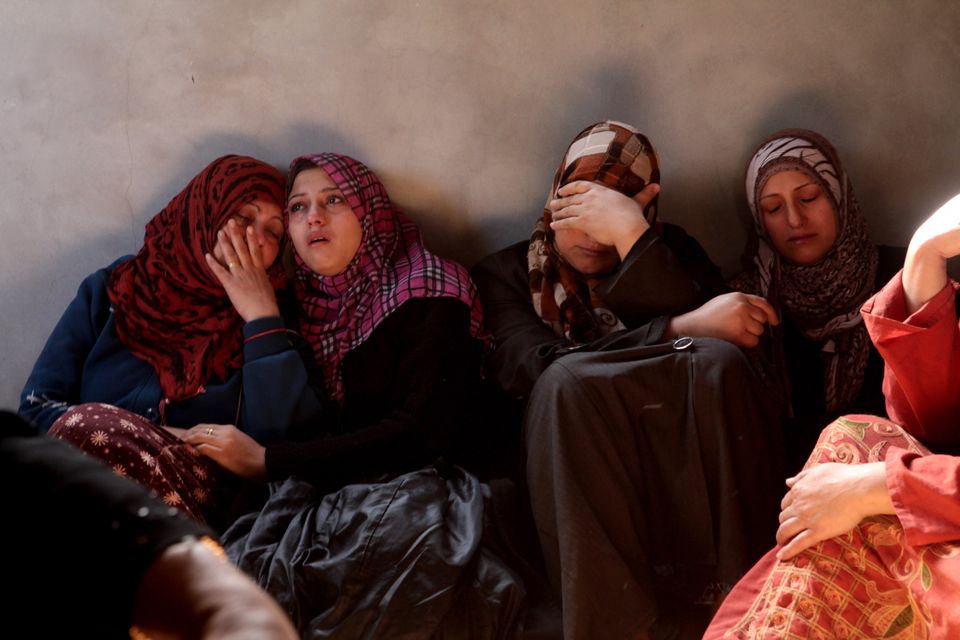