As airstrikes have rained down on Gaza in recent weeks, hundreds of thousands of Palestinians have been forced to flee their homes. Some received leaflets and phone calls from the Israeli army, urging them to evacuate ahead of fighting. Others simply feared that the airstrikes, tank shells and cross-fire might take their lives and those of their loved ones.

Yet for many Gaza residents, there are few secure places left to seek shelter. In fact, many don't have the slightest chance of exiting the enclave.

The only legal ways in and out of Gaza are through its official border crossings with Israel and Egypt. Gaza has little control over those crossings, and both of its neighbors have severely restricted the movement of people and goods across the borders because of security concerns.

Israel controls the Erez border crossing in Gaza's north. Since Hamas was voted into power in Gaza in 2006, Israel only grants Gaza residents permission to cross in certain circumstances, usually for humanitarian reasons such as medical treatment. At the start of the current round of fighting, Israeli authorities did permit hundreds of Gazans holding foreign passports to leave the strip through the Erez crossing.

While Hamas has no control over who will eventually be allowed into Israel, it can turn away those approaching the border from inside Gaza, as it did on several occasions this month. On July 15, the group closed the border "because of constant Israeli shelling," though there were no reports of shelling at the time. Palestinians trying to cross for medical treatment were left stranded.

The Kerem Shalom crossing, the main point of entry and exit for goods on the Israeli border, is also controlled by Israeli authorities. They limit what can be brought in and out of Gaza and prevent the import of goods they say can be used to build weapons or tunnels. This includes cement and steel, which are crucial elements needed for the construction of roads and houses. Israel also bars virtually all exports from Gaza.

The Rafah crossing connects Gaza with Egypt. Since the ouster of Egypt's Islamist President Mohammed Morsi, the new government has typically kept the crossing closed for goods as well as people. Even when the border is open, the right to pass is restricted to certain groups, such as medical patients and residents with foreign passports. "Even for those, there’s a waiting list of 15,000 people, according to Hamas border authorities," the Associated Press notes.

Gazans have created tunnels under both the Israeli and Egyptian borders that are used by militants and by smugglers who bring in goods from across the border. The tunnels on the Israeli side are currently one of the main targets of the Israeli army, as militants have used them to stage deadly attacks inside Israel.

Egypt destroyed more than 150 tunnels on its border last year, arguing that Hamas used them to support Islamist militants on Egypt's Sinai peninsula.

As the Associated Press explains, the destruction of the underground connection with Egypt was an economic disaster for Hamas, which levied taxes on the smuggled goods. Yet it also constituted a tragedy for many Gaza civilians, who relied on the tunnels for essential goods.

Israel controls Gaza’s coastal waters and restricts Palestinian boats from traveling farther than 6 nautical miles from the coast. During conflicts, this is often limited to 3 nautical miles. The sea blockade not only prevents boats from getting to and from Gaza, it also severely restricts fishing, once a thriving economic industry in the area.

International activists have tried in the past to break the naval blockade by approaching Gaza by sea. The largest and most controversial effort came in 2010, when six ships carrying aid tried to travel from Turkey to the Gaza Strip. Clashes ensued when the Israeli Navy boarded the ships, leaving nine passengers dead and dozens of soldiers and activists injured.

Israel also controls Gaza's airspace and does not allow access to and from Gaza via air travel.

Leaving Gaza on a plane hasn’t always been impossible. In 1998, Gaza's Yasser Arafat International Airport opened for business after its construction had been stipulated in the 1995 Oslo agreements. Then President Bill Clinton even flew in for its official opening. However, Israel shut down the airport in 2000 after the outbreak of the second intifada. Today, the airport remains destroyed and deserted. 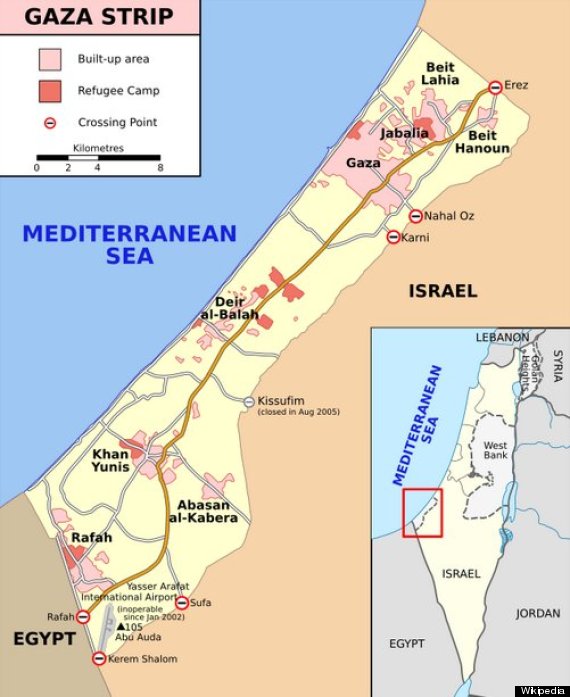