A ceasefire last August ended 50 days of fighting between Gaza militants and Israel, in which health officials said more than 2,100 Palestinians, mostly civilians, were killed. Israel put the number of its dead at 67 soldiers and six civilians.

Hamas and other militant groups launched thousands of rockets and mortar bombs from the Palestinian enclave into Israel.

Some 551 children were killed in Gaza and 3,436 were injured during the conflict, while an estimated 1,500 lost their parents, according to a report by Save the Children.

More than 70 percent of children in the worst-affected areas of Gaza suffer from regular nightmares and bed wetting and live in fear of further fighting, while half do not want to attend school because they are afraid to leave home, the charity said.

"We saw our home being destroyed. I was crying because we have memories and dreams there, from the day of our birth. My memories, pictures, clothes, toys ... everything is gone. I can't live, I only feel pain," a 12-year-old girl told the charity. 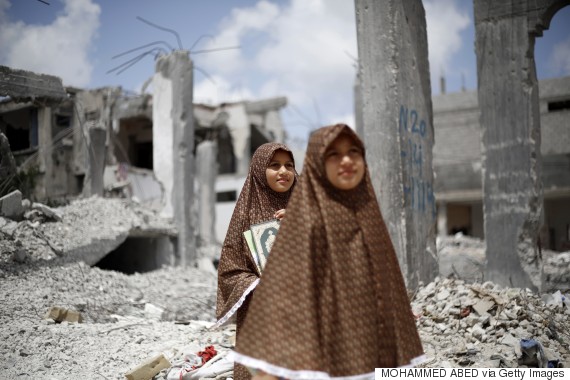 Palestinian girls walk amid the rubble of buildings, on June 28, 2015, which were destroyed during the 50-day war between Israel and Hamas militants in the summer of 2014, in the Eastern Gaza City Shujaiya neighborhood. (MOHAMMED ABED/AFP/Getty Images)

Homelessness and repeated exposure to violence, coupled with soaring unemployment for parents and limited mental health support, have prevented children from recovering from the mental trauma of war, according to Save the Children.

Around 100,000 people in Gaza are still homeless a year on from the conflict, while major reconstruction of health facilities, water networks and schools has yet to begin, the charity said.

Israel imposed a blockade on the Gaza Strip after the Islamist movement Hamas won power there in elections in 2006, and the flow of reconstruction materials into the territory has been greatly restricted since the end of the 2014 conflict.

So slow has the influx of goods been that the United Nations last month said it could take 30 years to repair the damage.

The continued blockade and threat of renewed conflict has made it difficult for children in Gaza to live normal lives, according to Save the Children.

"Many children in Gaza have now lived through three wars in the past seven years, the last one notable for its brutality. They are emotionally and, in some cases, physically shattered," Save the Children CEO Justin Forsyth said in a statement.

Of the 1.8 million people living in Gaza - a population growing by 50,000 a year - nearly two-thirds are dependent on aid in some form or another. It is the United Nation's longest-running relief operation, set up in 1949. 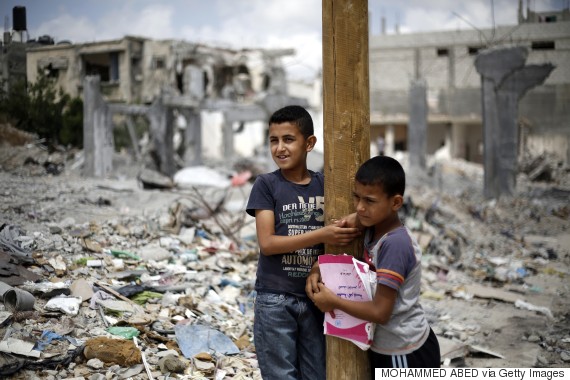 Two Palestinian boys stand amid the rubble of destroyed buildings, on June 28, 2015, which were destroyed during the 50-day war between Israel and Hamas militants in the summer of 2014, in the Eastern Gaza City Shujaiya neighborhood. (MOHAMMED ABED/AFP/Getty Images)