Gaza is a tough place; it's tiny, overcrowded and besieged. But the people are kind. The food is delicious, and the beach, though filthy, allows us to pretend that we're free. The sunset at sea is a spectacular scene, despite the Israeli warships dotting the landscape. Take a stroll down the street, and you'll meet vendors, mostly young children hawking their wares. Take a taxi, and by the time you get off, you'll be exchanging phone numbers with your newest friend, the taxi driver.

Our markets are complete chaos, an experience for all five senses. Rush hour is when school children, dressed in UNRWA uniforms or Barcelona and Real Madrid t-shirts, finish classes and flood the streets on their way back home. It is when I realize how young Gaza's population is. Night is as lively a time as daytime. Smoke shisha at a beach or downtown café or chill with the family. The people in Gaza, too, are humans.

But this isn't the scene in Gaza anymore. The streets are deserted, and so is the beach. Schools have become makeshift shelters crammed with displaced people fleeing death to a supposedly safer place. The beautiful noise of life has been replaced by a horrid one of death. Drones are humming overhead, and jet fighters are roaring.

There is always shelling at a distance. Distance, however, is relative. It could be so close that your windows will be blown out as you scream your heart out. Only then will you realize you have just escaped a narrow death. But someone else must have inevitably died. This could happen numerous times a day before you force yourself to sleep in the dark in a safe corner of your house to the sound of falling bombs and missiles, in the hope that none of these missiles will know its way to you.

The people in Gaza are living through yet another Israeli assault, the third such assault in six years, with nowhere to flee. As missiles hit civilian houses, entire families are obliterated. How else could one possibly characterize the killing of twenty-five members from one family in one strike, or the killing of another eighteen members from another family in just another strike? How can one describe the arbitrary and indiscriminate shelling of one of the most crowded and impoverished areas in Gaza City with endless barrages of missiles and mortar shells all night long while preventing ambulances and civil defense forces from entering the area to rescue and evacuate the victims?

"We don't target civilians," Israel tells us. "You're simply lying" should be a sane person's response to these, at best, baseless claims. Israel does target civilians with its sophisticated high-precision weapons, hence the over 1,000 deaths in Gaza so far, 80 percent of whom are civilians, according to human rights groups. Over 200 children have been killed, some charred, others decapitated and many disemboweled. Israeli warships have killed four young children from Bakr family playing on the beach in broad daylight, an incident witnessed by NBC's reporter in Gaza Ayman Mohyedin. A sniper killed a distressed young man looking for his lost cousin amongst the debris in the wake of its unspeakable massacre in Al Shujayeh.

Its unmanned drones killed two young brothers from Areef family with a missile while they were on their way to buy yogurt for their breakfast. In another incident, it fired missiles at and killed three children feeding their pigeons and chickens on the roof of their building. Israel has dropped thousands of tons of explosives on one of the world's most densely populated areas, killing 26 members from Abu Jame' family in one airstrike, 20 members from Al Najjar family, 18 from Al Batsh family, nine from Al Qassas family, 7 from Al Keilani family, 8 from Kaware' family, five from Hamad family and on and on. These are the stories we hear as we wait death in the comfort of our home.

A ceasefire might be negotiated and agreed upon. Hamas might soon stop firing rockets, but then will Israel cease to exercise its violence against Palestinians in Gaza and the West Bank on a daily basis? The reality is that if Palestinians stop resisting, Israel won't stop occupying, as its leaders repeatedly affirm. The besieged Jews of the Warsaw ghetto had a motto "to live and die in dignity." As I sit in my own besieged ghetto, I think how Palestinians have honored this universal value. We live in dignity and we die in dignity, refusing to accept subjugation.

We want to be able to get in and out of Gaza freely, whenever we choose. Why should our students not be granted their right to study at universities of their own choice? Why should our patients be left for their own death as Israel deprives them of receiving medical treatment in hospitals outside of Gaza? Our fishermen want to fish in our sea waters without the prospect of being shot at and killed. We deserve the right to access clean water, electricity and our most basic needs. And yet we can't because Israel occupies. It occupies not only our land but our bodies and our destinies. No people can tolerate this injustice. We, too, are humans.

From Gaza: I Would Rather Die in Dignity Than Agree to Living in an Open-Air Prison
Gaza Pictures 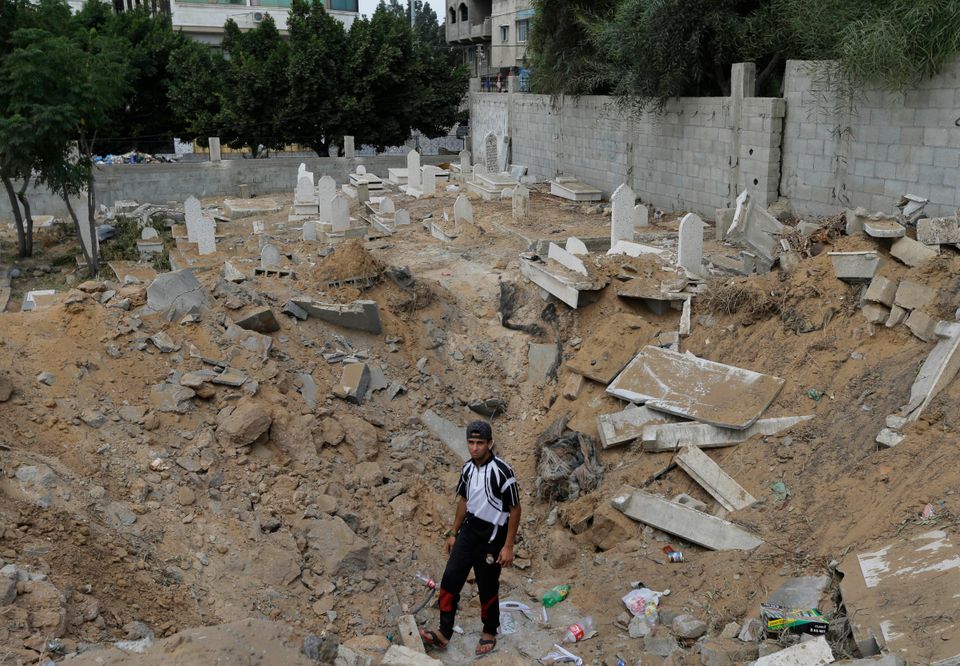