WASHINGTON -- The electricity is there one second and cut off the next. Each time it goes, it can take a struggling patient's life with it.

That's a lesson Tarek Loubani, a Canadian emergency room doctor, has learned over four years of volunteering to treat residents of Gaza.

Israel has imposed restrictions on the Palestinian enclave, home to 1.8 million people, since the area was fully taken over by the elected militant group Hamas in June 2007. Israel sees the blockade as necessary to prevent Hamas from obtaining weapons it can turn on Israeli civilians and soldiers. Gaza has been turned into a war zone multiple times since that blockade began, most recently last summer as Israel launched a military incursion against Hamas that killed thousands and damaged everything from United Nations schools to critical infrastructure.

As a result, the economy is in shambles and key services like electricity and water -- politically charged because they are largely provided by Israeli utility companies -- operate at unimaginably low levels when compared with countries like Canada, Loubani's home, or even just across the border in Israel.

Because the power supply in Gaza is so fickle, often running for only a third of day, Loubani said working in Gaza means providing medical treatment in ways that would shock his colleagues back in Ontario.

"Imagine that I have to do a chest tube to get blood or air out, if someone's fallen or gotten hit by a bullet or bomb ... instead of taking time and doing the procedure safely as in Canada, I just pop the trocar in," Loubani told The Huffington Post, referring to a medical device used to drain bodily fluids. "It's not normally used in this procedure, and if you tell any doctor I know, 'Oh, I put in chest tubes by slamming in a trocar,' they'll say it's craziness."

Loubani said he sees the electricity situation as "catastrophic." And he's had enough. Though he's a doctor by training, the young Canadian is now taking on the role of a fundraiser and visionary. Here's what he and a team of other medical practitioners have cooked up: a plan to keep Gaza's hospitals running for the community's most desperate patients using a resource no blockade can cut off -- the sun.

Loubani, along with fellow doctors Ben Thomson and Dalal Dahrouj of the University of Western Ontario and filmmaker Amy Miller, started a campaign called EmpowerGAZA late last month. Its goal is to raise $200,000 over the summer through online crowdfunding and July gala dinners in the Canadian cities of Toronto and London. The campaign is associated with a registered charity in Canada, Islamic Relief Canada, and will likely be implemented by the United Nations Development Program once funding is secured. It aims to provide around-the-clock electricity to the emergency rooms, operating rooms and intensive care units of four Gaza public hospitals.

The first $200,000 -- the goal of EmpowerGAZA's Indiegogo campaign -- is meant to cover the cost of installing solar panels on one of those hospitals. Two others will require $200,000 each, while the fourth hospital, one of Gaza's largest, will need $600,000.

After 22 days, the campaign had raised about $68,000 from around 370 people, according to EmpowerGAZA's Indiegogo page.

Loubani and Dahrouj, two of the doctors behind EmpowerGAZA, told HuffPost they began thinking about the project in September of last year, weeks after Israel ended an offensive into Gaza that claimed more than 2,100 Palestinian lives and saw 73 Israelis killed by militants. The International Criminal Court is investigating potential war crimes that occurred during the conflict.

Dahrouj said she became interested in the project after hearing from Loubani about the results of a needs assessment he had conducted in Gaza.

"A lot of people want to help, and there's a lot of things people can help with," she told HuffPost. For her, she said, the question was, "What is it the Palestinians find that they require at this point? Based on that needs assessment and discussions with multiple key players, the biggest problem is the inconsistency of providing medical care."

A Palestinian man reacts as he stands next to the bodies of the three children from the al-Rifi family killed in an Israeli military strike, at Gaza City's Shifa Hospital on Aug. 21, 2014. Israeli airstrikes killed at least six Palestinians, four of them children, that day in the Gaza Strip, the spokesman for emergency services said. Shifa Hospital is one Gaza facility that has already installed solar panels to power its intensive care unit. (AFP PHOTO/ ROBERTO SCHMIDT/Getty Images)

"I cannot imagine operating under those conditions," she added. "Something I do believe in and advocate for is that everyone be allowed the basics of medical care. Everyone will get a winning situation out of it."

The solar power approach seemed like the solution for a number of reasons, Dahrouj and Loubani said. Gaza's sunny climate was a big factor. But even more important was the fact that others had already taken advantage of the climate and harnessed solar energy.

Two Gazan hospitals already use solar panels to run their intensive care facilities without electricity interruptions, Loubani told HuffPost. Among them is the Shifa Hospital, Gaza's main medical referral facility, which Loubani said installed its solar capabilities with Japanese assistance and has had a steady stream of power to the intensive care unit since.

He added that the private use of solar power is catching on as well. "Right now, any home that can afford it is installing solar power," Loubani said. "One of our side goals is that if we bring in the knowledge and infrastructure, the ancillary effect will be that more people can install it in their homes."

The Canadian doctor said he hopes for that in the future because many Gazans currently rely on electricity produced by diesel generators that are "incredibly loud and incredibly dirty."

Solar power is "a little expensive but it works," said Muhammad Sbaita, a Gazan interpreter who spoke with HuffPost. He added that he was saving up to buy a solar panel that could give him eight hours of electricity a day -- doubling his supply and helping him with his business.

If it's fully funded, the EmpowerGAZA project hopes to expand at least one hospital's capacity within six months. "We want to do the [four] hospitals one by one, build on our success and build on lessons learned," Loubani said. He added that he hopes to be able to bring in supplies that might otherwise be impossible to obtain in Gaza because of the Israeli blockade. A UNDP spokesperson confirmed to HuffPost that the organization is in talks with EmpowerGAZA to help find solar panel suppliers for the project.

Tarek Loubani, one of the Canadian doctors behind EmpowerGAZA, stands in front of solar panels on the roof of Shifa Hospital, Gaza's largest medical facility. (Screenshot from EmpowerGAZA video.)

Loubani said the EmpowerGAZA team wanted to avoid making an overtly aggressive political statement -- or working with organizations other than the official Palestinian Ministry of Health -- despite the difficulties the blockade and Israel's behavior in Gaza have created for the medical situation there.

"There's a lot of ways in which we could have done this, like a campaign that would have played on people's political prejudices," he told HuffPost. "I suspect that if we ran a negative anti-Israel campaign, we might make more money. We're not interested in that. We don't care about Israel. This project makes sense during occupation and after occupation, this project makes sense ecologically as well as politically. What we want to be part of is building Palestinian civil society."

That civilian aspect of the crowdfunded campaign is especially important to EmpowerGAZA, Loubani added, because of the way institutions have failed to adequately respond to the humanitarian crises in Gaza.

Solar Panels Could Save Patients In Gaza's Hospitals, Thanks To A New Fundraising Campaign
A Day In Gaza 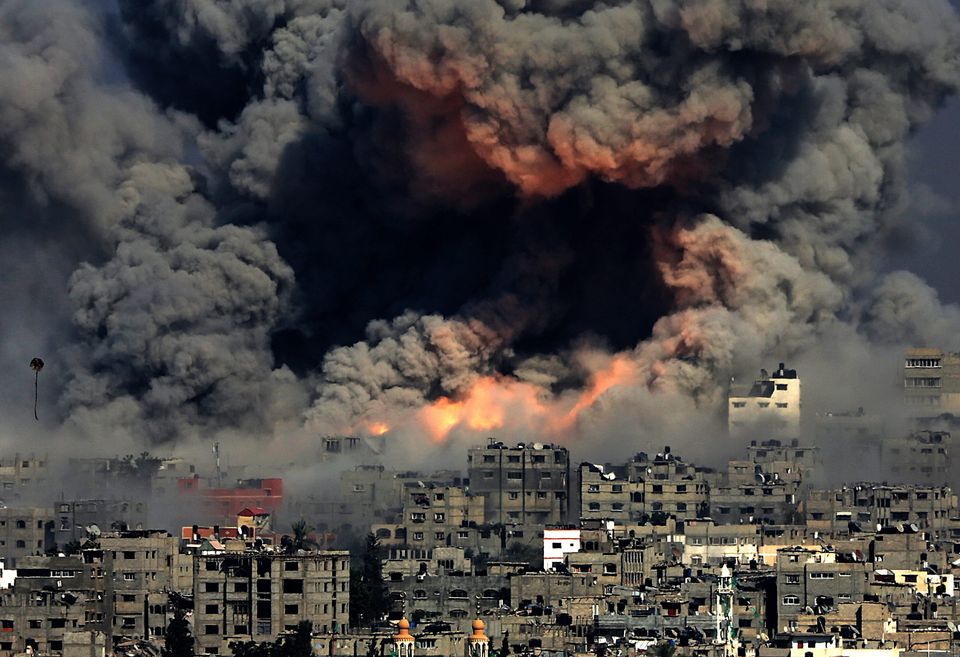