The images from and about Gaza disseminated through social media are striking, searing, poignant and loaded with messages, proving, yet again, that a picture (or cartoon) is worth a thousand words.

They range from neutral to graphic traditional media photos shot at the scene of events, alongside images from "citizen journalists" documenting Israel's onslaught on the densely populated strip, where most of the victims have been unarmed civilians, to cartoons and comic pictures making the point in more hard hitting or ironic terms. 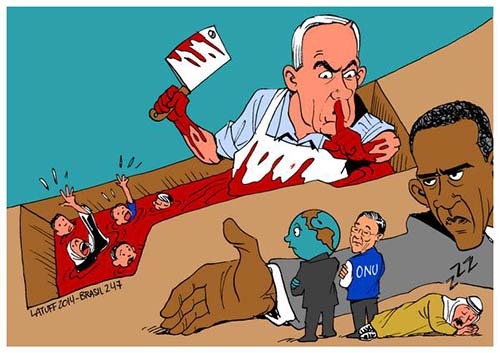 Brazilian cartoonist Carlos Latuff, who pulls no punches, drew Israeli Prime Minister Benjamin Netanyahu butchering Palestinians in a pool of blood with one hand and asking spectators to shut up with the other.

The spectators are U.S. President Barack Obama holding back any help to the victims, as well as the world and United Nations Secretary General Ban Ki-Moon standing idly by, while dormant Arab leaders snore away amidst the mayhem.

That and other illustrations have gone viral since the latest outbreak of violence began, with Twitter acting as a speedy conduit through which to publish news and views.

In a variation on the world's inaction theme, campaigners took to the Twittersphere with a fake photo showing Netanyahu, Obama and Ban in a take on the three monkeys who speak, see and hear nothing, and a caption that reads "3 idiots." 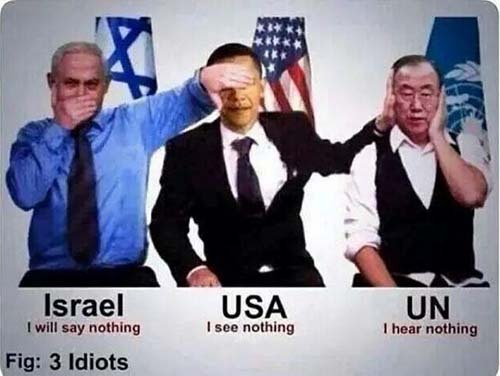 Screen shot of "speak, see, and hear nothing"

Going a step further, Egypt's CBC TV channel tweeted that activists had launched a cartoon drive entitled "Save the Innocence in Palestine."

It imagined what famous cartoon characters would endure if they lived under Israeli control and one picture in the tweet showed a brutal Netanyahu hammering away at a broken and bleeding Pinocchio. 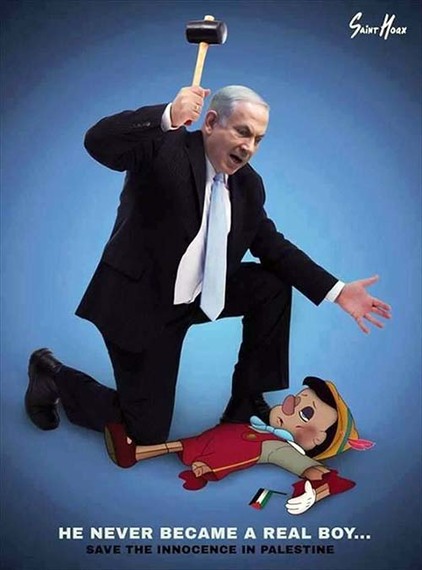 The most moving (and rattling) depictions making social media rounds have been photos from traditional and other news sources of dead or bleeding babies and children cut down by weapons fired from Israeli ground, sea and airborne forces.

World Editors Forum and WAN-IFRA research fellow Julie Posetti asked whether social media were to blame for the publishing of increasingly graphic images in newspapers.

Social media platforms are the Wild West of publication. Journalists and traditional news publishers are no longer the primary information 'gatekeepers' of public discourse; neither are they able to impose their professional publication standards and ethics on social media users and bloggers. Instead, they are co-creators of content in the social media sphere.

A divided picture tweeted this week with half a boy's face smiling and the other half pockmarked by shrapnel wounds carried a message marking a Fitr feast greeting that ended the Muslim fasting month of Ramadan.

With competition in a 24/7 news cycle at fever pitch, images can easily trip up legacy media reporters and editors.

According to Posetti, creators of user-generated content are sharing the public domain in debates about Gaza and other hotspots to grab various audiences' attention.

Under these conditions, adding proper sourcing and context within ethical parameters becomes increasingly difficult, but not necessarily impossible.

One such context is history, and comparing or contrasting events.

Remi Brulin, a research fellow at New York University, tweeted that Israeli pronouncements to the besieged Gaza population were straight out of the French colonial playbook in Algeria in the 1950s. 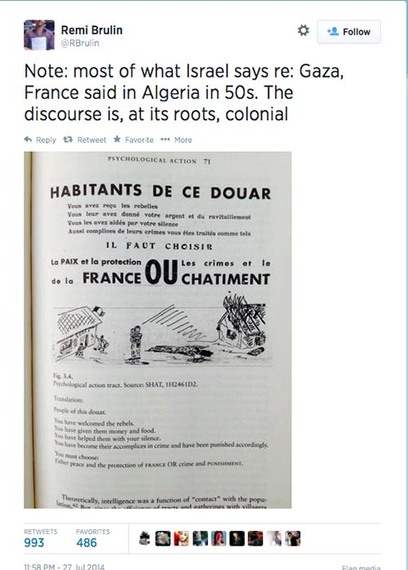 He produced a message on a page from a book addressed to residents of an Algerian area in which the colonial power at the time warned people to either choose France's peace and protection or face "crime" (by not submitting) and inevitable subsequent punishment.