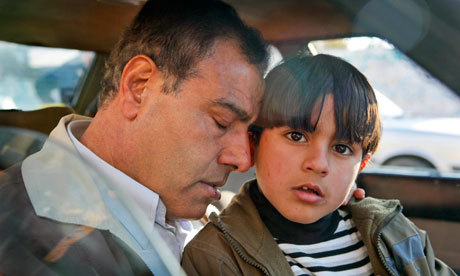 In one horrific instant, an Israeli shell took out a room in his Gaza home, killing three of his daughters and seriously injuring his fourth daughter, Shatha.

This after Dr. Abuelaish was raised in a refugee camp in Gaza. After he trained as a physician and spent years treating both Israeli and Palestinian patients. After a blockade the closure of the Gaza-Israel border prevented him from entering Israel. And after he tried desperately to find a way out of Gaza to keep his daughters safe, but was not allowed to leave.

Dr. Abuelaish would have every reason to hate and yet, miraculously, he has chosen to do the opposite. Ever since that horrific moment in 2009, Dr. Abuelaish has worked tirelessly for peace, advocating strongly against the killing of both Israelis and Palestinians. After the death of his daughters, he wrote a riveting memoir, I Shall Not Hate and created a foundation that awards scholarships to women from Middle Eastern countries, including women from Israel.

The other night, I had the immense privilege of speaking with Dr. Abuelaish, and here are some of the most salient points from our conversation:

The number one priority is to STOP the bloodshed:

Likewise, in the current conflict, Dr. Abuelaish asked for a call to action around demanding a cease-fire. (For some tangible ways to do this, please visit this article on how to contact your representatives and request they apply diplomatic pressure.) After a ceasefire is achieved, we can progress to...

Treat the root cause of the conflict, not just the symptoms:

As a doctor, we (are trained) to find the causal relationship. We take a (medical) history. The history is not to blame; the history is to reach an accurate diagnosis to set up the right treatment. This violence has its root causes. So, we need to focus on treating the root causes.

Dr. Abuelaish explained that we must first stop the current bloodshed, then ask five times why this occurred. This inquiry will help us identify and treat the underlying causes, which he believes is the only way to create a peaceful co-existence.

Take it from a doctor: the value of a human life transcends all labels

"We as doctors don't deal with patients according to name, ethnicity, religion or background. We treat all equally, with respect, with justice, with goodwill."

Indeed, medical ethics dictate that physicians abide by this code. Doctors in the U.S. Armed Forces, for example, treat an injured "enemy combatant" alongside their comrades, and are asked to triage patients according only to the severity of their wounds. In the most pure sense, doctors are supposed to stand only on the side of humanity. Dr. Abuelaish reminds us "there is no cause to justify the killing of any human life."

Let's take a cue from our shared profession and remember that every human life is sacred.

People in Gaza are living in unimaginable fear:

Imagine, if you're at home, deprived of electricity, of anything. You are stuck in your apartment, you can't reach the windows, you have to be in the middle, even you can't raise your head, because of snipers. You can't light the candle. If there is a candle, (and they) see the light, they target the people. And, there's no food, no water... You don't know if you will be alive after 30 minutes, after an hour, tomorrow morning.

"The innocent people who are killed -- we know the casualties. What we don't see... is 10 times greater. It's the broken and the wounded souls."

we are widening the gap. We are practicing and even committing evil sins. They are provoking hatred against each other; no one is free from this anger... The consequence of that is hatred and violence, because once you inject the people with this hatred, hatred (fuels) violence.

An appeal to the American Jewish community

I appeal to the Jewish community to stop this bloodshed, to understand it is not in their interest, it is not helpful to Israel; to understand there is another way. And not to hide behind self-defense. There is no cause to justify the killing behind any human being.

He asks that North American Jews and others sign an appeal -- originating from Jewish leaders -- demanding a mutually agreed-upon ceasefire immediately.

Who, he believes, can one day become close allies
Dr. Abuelaish thinks Palestinians will be the greatest long-term ally to Israel. He sees Israelis and Palestinians as two peoples whose histories and fates are closely intertwined, and envisions them one day collaborating and protecting each other. What a beautiful vision this is to behold. However, first, the bloodshed on both sides must stop.

For more information on how you can help, please see 5 Simple Ways You Can Help Create Peace in Gaza and Israel.

For more information on Dr. Abuelaish, please see his foundation, Daughters for Life, and book, I Shall Not Hate.