(Reuters) - About 1,000 Palestinian Muslims fleeing Israeli shells devastating their Gaza neighborhood have found shelter in a building they otherwise would rarely if ever enter, the city's 12th-century Greek Orthodox Church.

Despite its thick walls dating back to the Crusades, the Church of Saint Porphyrius was still not a very safe haven. Shortly after they arrived, Israeli aircraft bombed a nearby field, spraying shrapnel on the church and damaging graves.

But children from the Shejaia district, where some 72 Palestinians - many of them women and children - were killed during fighting between Israeli forces and Hamas militants on Sunday, were busy playing football in the yard on Tuesday.

Their mothers watched on mattresses and plastic chairs provided by the church, along with food, blankets and toys.

"We have opened the church in order to help people. This is the duty of the church and we are doing all we can to help them," Archbishop Alexios told Reuters as the sounds of small children echoed outside his office at the church.

"At the beginning there were 600 people and today they became a thousand - mostly children and women. Some of those children are a week old," said the head of Gaza's Greek Orthodox minority, the largest of the Christian communities here.

Only about 1,400 Christians - Orthodox, Catholics and Protestants - live among the 1.8 million Muslims, meaning they make up 0.08 percent of the population in the crowded Gaza Strip dominated by Hamas, an Islamist group.

Their life as a religious minority has not always been easy

When the then Pope Benedict quoted a medieval scholar describing Islam as violent and irrational in 2006, unknown militants attacked five churches in Palestinian areas, including Saint Porphyrius - even though it is Orthodox, not Catholic.

NOWHERE ELSE TO GO

Palestinian officials, including from Hamas, denounced that violence and it was not repeated. It all seemed far away now as Gazans reached out to help neighbors who have lost their homes in the two-week Israeli offensive.

"The mosque nearby and the neighbors of the church are all helping. We are still in need of mattresses, blankets, food and most important is petrol, as we suffer blackouts. If there is no electricity we cannot have water also," said the archbishop.

Since the start of the offensive, more than 100,000 Palestinians – about 6 per cent of Gaza's entire population - have sought shelter with the United Nations Relief and Works Agency (UNRWA), crowding into 70 schools, the organization said.

Refugees streaming from Shejaia in the eastern part of Gaza City to the church in the southwestern area of al-Zaytun said they did not know where else they could go now.

"We have escaped from our houses and came here and they bombed the church. Where should we go? Let them tell us where we should go," insisted Jawaher Sukkar, who fled with her children.

Accusing Israel of targeting civilians, she said: "The shells chased us as we ran ... can you imagine, a boy falling the ground and his mother cannot stop to pick him up?"

One possible reason for the shelling close to the church is that Israel's military believes militants have used cemeteries to launch rockets fired at its cities and to hide weaponry.

Despite the overcrowding and danger, Alexios said there has been some joy in the church in the midst of tragedy.

"Yesterday, a woman gave birth to a baby, a new life. Man should be hopeful.. There is death but also there is life too," he said with a smile. 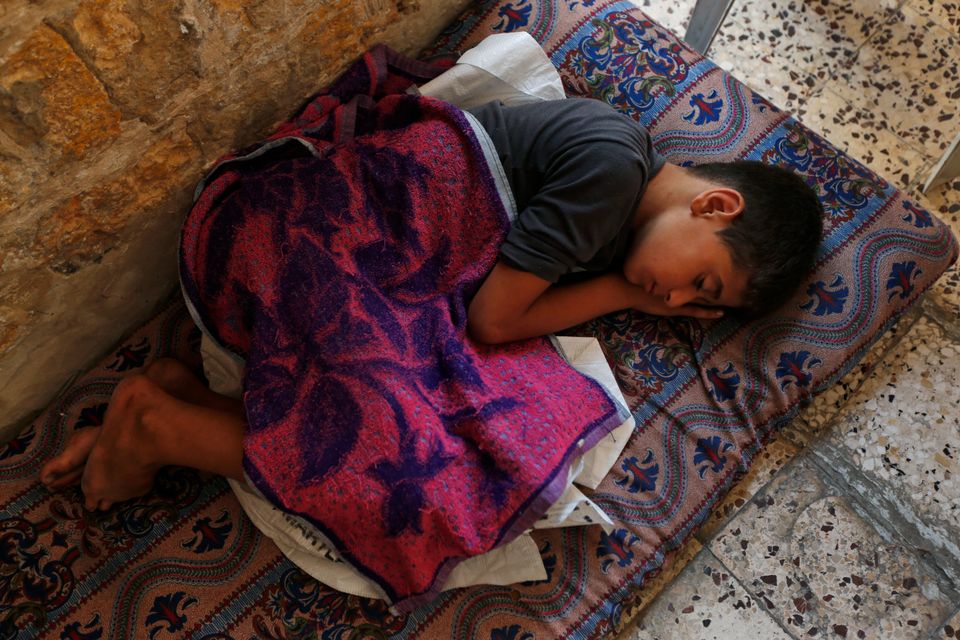 1 / 44
A Palestinians boy sleeps on a mattress on the floor of the grounds of the St. Porphyrios Church in Gaza City, on Wednesday, July 23, 2014. The Greek Orthodox church had opened its doors to hundreds of displaced Palestinians as tens of thousands have fled their homes in fear of Israeli strikes. (AP Photo/Lefteris Pitarakis)
ASSOCIATED PRESS