It's Thursday evening in Kiryat Malachi and the city of nearly 21,000 residents is strangely quiet. The usually busy city center is empty of people -- most of the stores and restaurants have been shut down. There are no high school students loitering around, and no elderly folks smoking hooka or drinking black coffee in the kiosks. No music blasting anywhere. Signs that indicate a recent rocket attack has occurred.

Earlier in the morning, a Gaza rocket struck the city, slamming an apartment building and killing three civilians fleeing for cover in the stairwell of their building.

The effects of that rocket strike on the city were felt hours later. A pregnant woman with her husband could be seen sitting outside of their apartment building, listening to news on their car radio. "I'm not going to be able to run down three flights of stairs every time the rocket siren goes off," she explained to me. "I told my husband that we're sitting outside near the shelter for the rest of the evening."

Further down the street, Moshe Zakuto has just arrived home after a long day of work. He and his wife Juliet have been living in Kiryat Malachi for over 50 years. "We will never leave our home here," said Zakuto, who originally immigrated to Israel from Istanbul in 1961. "We have nowhere to go and even if leaving was an option, we wouldn't do it," he says.

There are three generations of Zakutos living in Kiryat Malachi. Moshe and Juliet also have grandchildren who live in the city. "I came to Israel when I was 17 and I served in the army," Zakuto says proudly. "All my children have served, and so have my grandkids."

"We love this country, and we love this land," adds Juliet, originally from Fez, Morocco. "The rockets will never scare us away."

Juliet admits that she takes a very rational approach to the rocket attacks. "My kids are more worried than I am," she explains with a smile. "I know that some people get more hysterical and rightly so in response to a rocket attack. But I believe that we will get through this difficult period and, I hope, without too much trauma to people's souls."

But about four blocks away from the Zakuto's home, for the inhabitants living in the apartment building that was struck by the rocket earlier, the reality looks bleaker.

Entering the apartment building, six memorial candles can be seen lit at the bottom of the stairwell, lit in memory of the three residents who were killed trying to take cover from the rocket as the siren sounded. The victims included a 26-year-old mother about to give birth, Mirah Scharf. A Chabad outreach emissary in India, Mirah left behind her husband, who was wounded by shrapnel in his head, and three young children including their four-year-old son who was also injured in the rocket attack. The two other victims were Aharon Smadja, 49, who also left behind three young children and 24-year-old Yitzchak Amsallem. In addition to the fatalities, two people were seriously injured and two infants sustained light wounds. 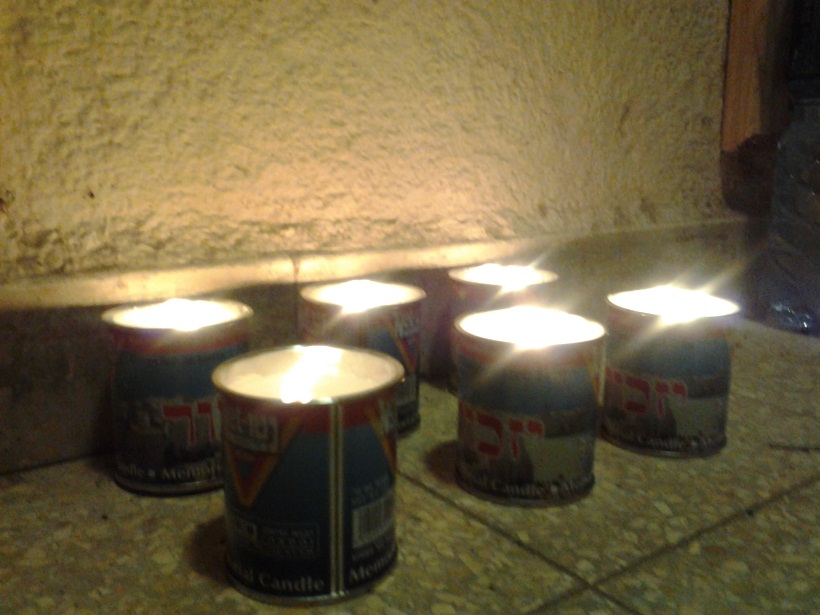 Photo: Tazpit News Agency. Memorial candles that were lit for the three Israeli victims including a pregnant mother, who were killed by a Gaza rocket attack an apartment building in Kiryat Malachi on Thursday morning, November 15.

For neighbor Chana Spektor, a mother of three children who only a year ago moved to Kiryat Malachi from the Ukraine with her husband, where the couple served as Chabad emissaries, the rocket attack "was shocking and terrifying."

"I could never imagine that life in Kiryat Malachi would be so dangerous," Spektor told me, still in shock. "When I saw the bleeding baby rushed to the ambulance, only then did I realize the extent of the attack."

"We heard the siren and stayed in the apartment," explained Spektor. "Our building is full of large families with children and many of them came into our apartment when they heard the siren. The entire building shook and glass shattered all over."

"I can't believe this happened a week before my son's Bar Mitzvah," she further adds. "All the invitations that I was supposed to send out today just flew everywhere and now I can't find them," she says disoriented.

One of the most frustrating elements of the current escalation for Spektor has been the international response. "Russia strongly condemned Israel for its defensive operation in Gaza today, but had little to say to Hamas," she said.

"We are trying to survive here," Spektor emphasizes. "But I realize that if you don't actually come to Israel and see the impact of these rockets, you can't understand our reality. That's why Putin makes those remarks."

As I make my way back down the heavily damaged building, an elderly man leaves his apartment and walks slowly down the blood-stained stairs. He looks sadly at the memorial candles at the bottom, and whispers a few words, and then continues on to the synagogue to pray. Meanwhile, outside the apartment building, soldiers, security personnel and local Israeli press continue to buzz around, as tired residents in the city prepare for a long night ahead. 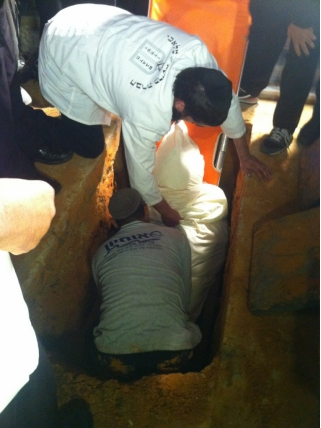