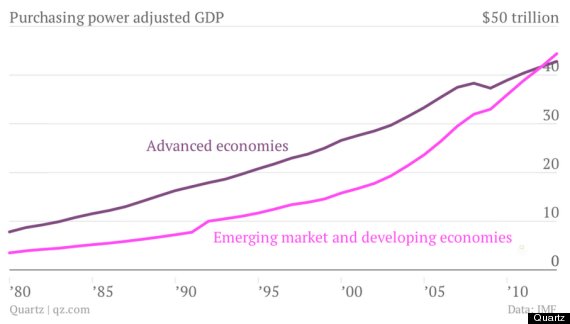 More From Quartz:
- Hippies and libertarians have become unlikely allies in a war against solar power
- Twitter and Facebook’s global impact as told through which governments want their data
- It’s cheaper than ever to go to India, but tourists—especially women—are staying away
- The latest breakthrough in South Korean plastic surgery is just plain terrifying

According to the International Monetary Fund—the supplier of this data—emerging and developing economies will have a purchasing price parity-adjusted GDP of $42.8 trillion in 2013, while that of emerging economies will be $44.4 trillion. In other words, emerging markets will create $1.6 trillion more value in goods and services than advanced markets this year.

Advanced economies are, according to the IMF, the 34 nations that result from combining the members of the G7, euro area countries, and the 4 “newly industrialized Asian economies”—Taiwan, Hong Kong, Singapore, and South Korea. The world’s 150 other nations are considered emerging or developing.

Excluding the largest advanced economy, the United Sates, and the largest emerging economy, China, which both account from more than 30% of their respective group’s total GDP, the data show that the PPP-adjusted GDP of poorer nations surpassed that of richer ones in 2009. 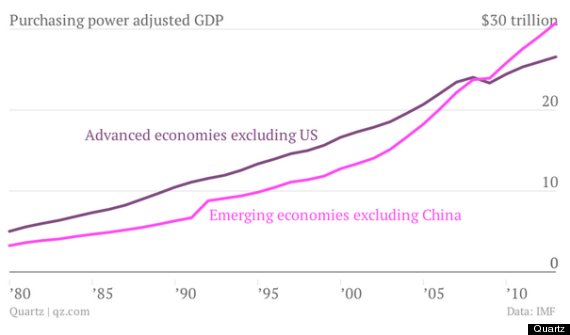 It’s worth keeping in mind that the emerging economies have strength in numbers. Not only are there more emerging and developing nations; those nations also boast a larger combined population.

As such, emerging and developing economies trail far behind advanced economies in per-capita terms. Their aggregate per-capita PPP-adjusted GDP is $7,415, while the same measure for advanced nations totals $41,369. 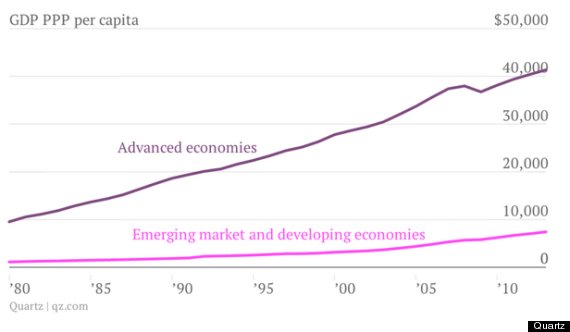