The nation's economy expanded at an annual rate of 2 percent last quarter, according to this morning's GDP report. That's faster than last quarter's 1.3 percent and a bit above what most analysts were expecting, so that's good. But it's also just trend growth -- 2 percent is about what it takes to keep the job market pretty much where it is.

A few observations about the report:

The President has the edge on these talking points. It's momentum that matters right now, and thus the fact of faster third quarter over second quarter growth helps him more than the fact that growth is at trend (and not faster).

Moreover, the President and the Democrats have two strong talking points here, both of which have the added advantage of being true -- not always the case with talking points these days. First, had Republicans considered the President's American Jobs Act from over a year ago, GDP would be growing faster right now, probably by about a point according to outside estimates, and the difference between 3 percent and 2 percent would actually be a big deal right now.

Second, Congress could resolve the fiscal cliff if the Republicans would agree to the expiration of the Bush tax cuts on only the top 2 percent of households. Or, as business leaders suggested yesterday, introduce a different compromise that includes new revenues along with the cuts we've made so far. Even beginning to move in that direction would be a useful signal that could help with the "wait-and-see" problem noted above. 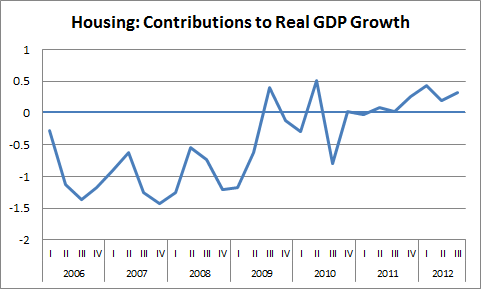