The economy expanded by 1.5% in the second quarter, down from 2% in the first quarter and another sign of the downshift we've previously seen in the job market. Consumer spending, still 70% of GDP, slowed in the second quarter to its slowest pace in a year, led by a 1% decline in spending on durable goods (big ticket items that last for a few years, like cars and refrigerators). The public sector also continued to contract, subtracting 0.3% from growth in the second quarter.

The usual suspects are contagion from Europe, worries about the fiscal cliff, the ongoing deleveraging cycle where households are still too wrapped up in smoothing out their balance sheets to do much consuming (the savings rate climbed in the 2nd quarter), and that in turn sends negative signals to investors. Pushing the other way are lower gas prices and a housing market that seems to have finally carved out a bottom (investment in homes has contributed to growth for over a year now).

Sure... but at this point, I'm less convinced by this list of suspects. I think we're stuck in a negative cycle where weak employment suppresses incomes which suppresses consumption, investment, and growth, feeding back into weak hiring. It's a cycle that's clearly self-perpetuating, and the best way out would be, as Paul Krugman points out this morning, to take advantage of the low borrowing costs available to the government and put some people back to work through state fiscal relief (fiscal contraction has lowered real GDP growth in 9 of the last 10 quarters), repairing the public schools, and other necessary infrastructure repairs (read this and tell me if you disagree!).

More to come on the GDP report... there are revisions to earlier years here that look interesting ('09 was less negative than we thought, '10 was less positive). 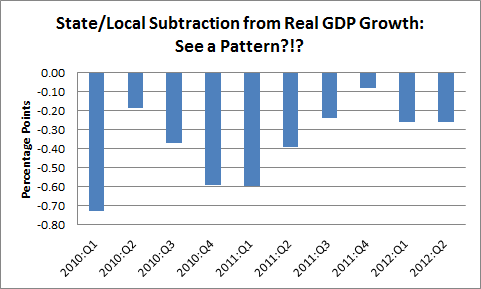