Geena Davis, the actress who inspired a generation of young women to dream of being baseball stars and the founder of the Geena Davis Institute on Gender in Media, has a pretty clear-cut solution to the lack of women in Hollywood films. (To give you an idea of what we're talking about here, just six of the 50 top-grossing films of 2013 starred women, and 20 percent of those 50 movies didn't even have a notable female supporting character.)

Being the magnanimous activist she is, Davis shared her two-step plan in an op-ed for The Hollywood Reporter on Dec. 11.

The first part of her plan involves upping the count of women in featured roles:

Step 1: Go through the projects you're already working on and change a bunch of the characters' first names to women's names. With one stroke you've created some colorful unstereotypical female characters that might turn out to be even more interesting now that they've had a gender switch. What if the plumber or pilot or construction foreman is a woman? What if the taxi driver or the scheming politician is a woman? What if both police officers that arrive on the scene are women -- and it's not a big deal?

And the second part targets the extras:

Step 2: When describing a crowd scene, write in the script, "A crowd gathers, which is half female." That may seem weird, but I promise you, somehow or other on the set that day the crowd will turn out to be 17 percent female otherwise. Maybe first ADs think women don't gather, I don't know.

So to break it down even more simply: 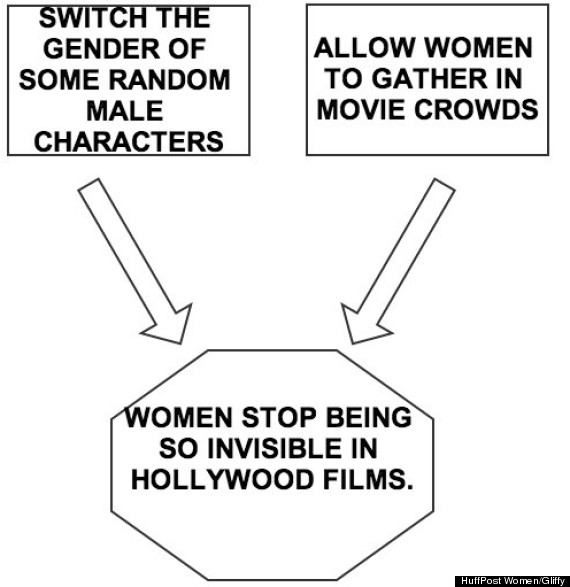 This all sounds pretty easy to us -- especially when you consider, as The Cut's Kat Stoeffel pointed out, that this seemingly elusive gender-swapping has actually happened before without it mattering much at all. (See: "Alien" and "Salt," among others.)

We also can't imagine it would be all that hard to find some female extras to play college students/New York City pedestrians/drag-race enthusiasts/16th-century peasants/any other crowd of humans a screenwriter may dream up.

So get on it, Hollywood. Geena Davis has spoken.