More comedians should be like Larry David. Asking questions. And Passover is nothing if not a holiday about questions. So... L.D. & Passover? A perfect match.

It was the AHA Gefilte Fish moment. Sweet memories of Passovers Past were swirling in my head -- from Maxwell House Hagaddahs to mom's matzoh ball soup. A wandering Jew in search of a Seder, I was beginning to feel the tug of darkness. And then the light bulb went off.

What better way to celebrate the holiday of the Four Questions than laughter? So, on a whim, I plunked down my week's savings for a last-minute ticket to Fish in the Dark, Larry David's comedy about a death in the family.

Why not? After all, it was the perfect antidote to life's bitter herbs. A glass of Manischevitz to wash down the michigas.

Comedian Larry David might just have the ultimate solution to global gloom. His direct, Let-me-ask-you-this approach to life is the great escape from bondage, the solution to a colliding L.D. world called "L.ife D.ilemmas." His answer? Grope in the dark. Explore. Question Everything.

L.ine D.rive - My own family is famous for asking endless details, so I totally get it. Larry hits the questions right to us: low, fast and furious. (His: Is it walk the walk or talk the walk? Mine: Why is gefilte fish pike, not mackerel?) I could practically hear Larry ask, "Why Moses, not Zorro?" Or "Why the Red Sea, not the Mediterranean?"

L.ucid D.ream - L.D. is a beam in the night. He turns morbid into cinnamon babka, and we just feel better. Mundane becomes humane. He makes us see clearly amidst the murkiness of night. Relatives quibble, competing for "Best Eulogy" award at a funeral service. And seriously, who dares to question how long dead bodies should languish? Or why they shouldn't be removed as quickly as busboys clear tables?

The L.ow D.own - Turns out, when you are feeling low down, it's possible to reach out to anyone, from the Pope to, well, say, Larry David. I did. Maybe it's a Jewish thing. Maybe it's a neurotic thing. Or maybe it's just a manic-comic-depressive thing, enriched by the synchronicity of matzohs and macaroons. 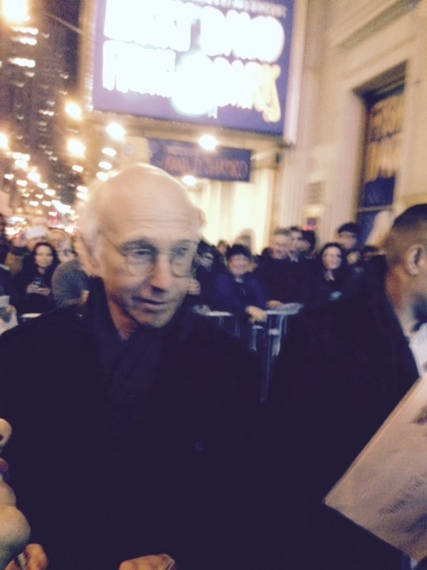 But whatever it is, more celebrities should be like Larry David. Approachable.

L.ong D.istance Questions - Flash back to April 1993. Ready to lose my network news job, I took a stab in the dark. I wrote a limerick to Larry after the famous DOLORES episode of Seinfeld, questioning the pronunciation of a female body part (the one that rhymed with Jerry's date, whose name he couldn't remember). I called the next day to follow up. Suddenly Larry David was on the phone, listening to my jobless plight, grabbing his Webster's dictionary to check the pronunciation. Should the emphasis be on the first or second syllable? The conversation was, in a word, priceless.

L.aboratory D.evelopment - We chatted about many things over the next few months, from our parallel lives (our fathers had been diagnosed at the same time with the same illness), to our creative projects, evolving like petri dish experiments in high school biology labs. Could I watch a taping? Could I come say hello? Could I audition? He kept encouraging, and kept questioning.

Lincoln Douglas L.D. Debates - Fast forward to Christmas Day, 2014. Logic. Ethics. Values. An LD trifecta. It was a Yuletide shot in the dark, but I'd heard Larry was writing a Broadway play and wanted to invite him onto my weekly radio show. He'd been spotted at the bar of a certain hotel reading the Sunday New York Times op-ed. I felt the sudden urge to call him up. I was feeling nostalgic, and missing my parents, whose 67th anniversary, and Hanukkah, had just passed. Was it the curious coincidence of melancholy, menorahs and mistletoe?

That December 25th, sitting in a drafty Starbucks, sipping an iced latte, listening to the Charlie Brown Christmas soundtrack, I dialed up the hotel and asked for Larry David. Once again, he answered. I reminded him of our once-upon-a-time conversations and how he'd helped me out of a slump by being compassionate, by listening, and by asking questions.

Lucy Desi dialogue - This time I was the one asking the questions -- brazen yet respectful. Okay, so he declined being a guest on my radio show. But then he applauded my Chutzpah. And he hung in there while I asked a bit more. Could I watch a rehearsal? Definitely not. Yes, he wavered when I suggested taking a photo to illustrate my article. But give the man credit. He could have been brainstorming with Mel or Jerry or Woody. Yet there he was talking to me, the pronunciation kid from Bayside, Queens. He continued chatting amidst the background coffee shop clatter. Forget about genius. The guy's an Aristotle. And better yet, a mench.

Yup. I'd found my Passover niche watching Larry David's bereaved, befuddled Drexel family blink like Gefilte Fish in the Dark. Totally liberating. It was all about finding freedom in laughter... and in asking Questions.

Larry David seems to have found the Answers. He's L.D. in theme and variations: Lamb shank in the Desert. Luminescence in the Dark.

I'm still in shock and awed
By your genius un-curbed and un-flawed
From nothing particular
To the vehicular
As your laughing slave, I applaud.