Timothy Geithner's bank stress test is worthy of the Noble Prize in Economics and is the most important financial innovation in two decades. Having spent decades abating and resolving financial crises around the world, he was able, willing and ready to abate and resolve our own Wall Street Crash of 2008. This was a major endeavor that led to the recommendation of the bank stress test. As CEO of the Federal Reserve Bank of New York and later Treasury Secretary he led the fight to abate financial panics, prevent severe market liquidity constraints, corporate insolvencies, working with a legislature that was slow to come to the rescue of its citizens.

He made it clear that a "wall of money" was what it took to restore investor confidence. Quoting Stress Test, "Without guarantees, creditors would continue to run from banks . . . Without more capital banks would face increasing pressure to sell assets at distressed prices . . . . exacerbating what threatened to be a severe downturn" for our citizens.

He proposed a proactive approach to avoiding future liquidity constraints, and the subsequent insolvency, the bank stress test. The announcement of the first bank stress test led to "every financial indicator was heading the right way . . . fears of widespread nationalization faded, confidence returned to the financial system, and confidence bred stability. The system had become investable again."

With him we should congratulate Hank Paulson, Ben Bernanke, Don Kohn and many, many awesome colleagues who worked ceaselessly and persevered beyond the call of duty to save our nation. And for those who blindly believe that government cannot do it right, look at the humongous private sector mess they cleaned up.

Going forward we need a new approach to market and economic stabilization. Proactive tools, as Geithner had the foresight to recognize, are key to this future stability. In my 1995, 2 volume, 550 page master of finance thesis I had proposed a method to quantifying the Efficient Market Hypothesis. Since Eugene Fama proposed this concept in the 1960s academia has not quantified market efficiency. Quantifying market efficiency provides a rational & quantitative basis for discussion. See table below. 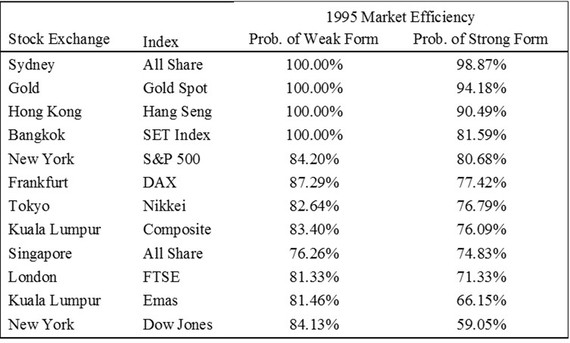 I was surprised by my 1995 findings, and could not explain it then. The US just about made it to the top 5 with its broader S&P 500. The so called third world countries had more efficient bourses than the US! 20 years later, we know why. $150 billion in bank fines says a lot for the US being at the bottom of this list.

To continue with Geithner's innovation, there is dire need for self-accountability, proactiveness and transparency in a quantitative manner much more than we currently are. Self-accountable means that officers have something real to lose if they mess up. Proactive means having tools that allow shareholder-investors to take action ahead of a potential disaster, thereby resolving issues before they become a panic. And transparency means breaking down the barriers to information asymmetry, that bankers know (if that) more about what is going on in their companies than their shareholder-investors.

I am not a proponent of excessive legislature but anarchy by any other name is still anarchy. I do believe we need to instill market disciple. This means making sure Financial services, Insurance companies and Banks (FIBs) own up.

Self-accountability requires that officers really take care of the downside risk by ensuring that they put their money where their mouths are:(1) All forms of owner occupied mortgages are nonrecourse, because bankers who earn $20 million a year should definitely know better than homeowners who earn $55,000. And thus have the onus to bear the responsibility for the mortgages they make.(2) Investment bankers and their kind, must take first loss i.e. must own a substantial portion of the riskiest portion of their product. For example the bottom 15% of their mortgage pool/deal.

Geithner had proposed publishing loss estimates with the bank stress test results. Seven years on, I think we need to go further. Transparency requires 4 columns by product type, in quarterly financial statements (a) historical losses, (b) expected losses, (c) tail losses (I prefer CVAR), and (d) full naked obligation without credit enhancements and risk mitigation, assuming the instruments failed. This places the onus of explaining their business on the bankers and not the shareholders or regulators. Too complex to explain is not acceptable. It enables investors to be proactive, to compare risk by subindustry, ask better informed questions, and reward or punish management with their (investors') economic votes. This transparency facilitates market response on a case by case basis well before there is cause for panic.

In my opinion, publishing risk metrics such as VARs are worthless as evidenced by the impressive success of the bank stress test.

The two final and surprising lesson from the Wall Street crash of 2008, are (1) markets are not godlike. Markets are only as good as the analysts, traders, investors, managers and officers who operate in these markets, not more. (2) There are times when we cannot leave it to free markets that are not disciplined. Imagine if Tim Geithner, Hank Paulson, Ben Bernanke, Don Kohn had said let the markets determine who wins and who loses? We would be in the Ultimate Depression that would have been several times worse than the 1930s Great Depression.

Is there an economics case more worthy? Timothy Geithner, I nominate you for the Nobel Prize in Economics.