Skywatchers, get ready: the Geminid meteor shower will peak early Friday morning, at around 3 a.m. local time, and it's expected to put on quite a show.

Bill Cooke, the head of NASA's Meteoroid Environment Office, told The Huffington Post that the Geminid meteor shower could be the year's best. More than 100 meteors, or "shooting stars," may be visible each hour, with some lucky viewers seeing a couple every minutes, Cooke said.

Even though the Geminids haven't even peaked yet, the shower is "already knocking people's socks off," Cooke said.

Space.com reports that because the moon will be at its new phase, viewers won't have to worry about its glare interfering with the visibility of meteors.

Most meteor showers occur when Earth passes through debris left by comets. The source of the Geminid meteor shower, however, is debris from 3200 Phaethon, a "rock comet."

A never-before-seen meteor shower could make an appearance at around the same time. This shower, which comes from debris from the comet Wirtanen, could produce up to an additional 30 meteors per hour, according to NASA.

Comet Wirtanen was discovered in 1948, just after World War II, and takes 5.4 years to orbit the sun. It reaches its closest point to the sun just outside Earth's orbit. Although this comet has skirted Earth's orbit many times, Earth has not run into its debris streams before. 2012 could be different.

The best way to view a meteor shower is to go to an area away from city lights. Viewers should lie on the ground and look straight up to view as much of the sky as possible. But don't expect to see any meteors until you've allowed between 30 and 40 minutes for your eyes to adjust to the dark, and at a minimum, plan to stay out for at least an hour.

So grab that jacket, hat and scarf -- and maybe some hot cocoa -- and get outside. 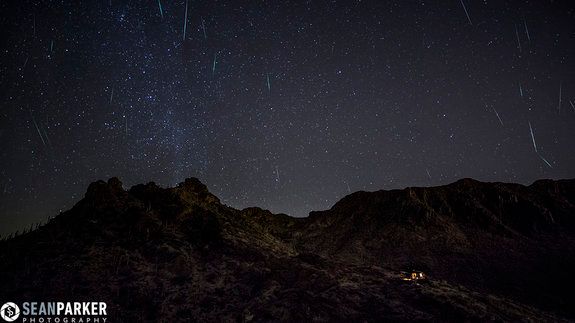