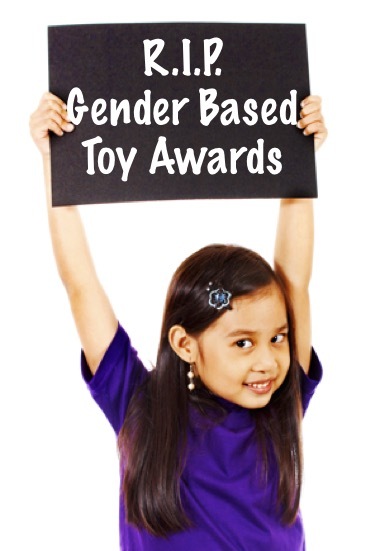 The Toy Industry Association (TIA), a 100 year old trade organization, today announced the categories in its Toy Of The Year (TOTY) Awards competition, to be held in February 2017. Normally, a press release about toy award categories would not be exactly breaking news, but this was different for one very significant reason...

Boy and Girl TOTY Awards Have Been Eliminated

For years the TIA has insisted on reinforcing gender stereotypes by selecting a Boy Toy of the Year and a Girl Toy of The Year. Last year, in this post, I called on the TIA to eliminate gender based toy award categories. I also created this petition to try to change the TOTY Awards.

The revised TOTY Award categories puts the focus on the toys, as it should be. Who knows what makes something a boy toy or a girl toy? How do you judge those categories? Do all boys like the same thing? Does every girl like dolls?

I applaud the TIA for making a change to the TOTY Awards and removing gender stereotypes from their awards.