Our study of women learning to code at Thinkful concludes there's simply no difference in the performance of men versus women among adult learners. We do, however, find enormous differences in the ratio of women versus men who enroll in coding classes. With all the qualitative debate around the issue of gender in software education we thought we’d be transparent about our own numbers.

So, how do women perform in online coding classes versus their male peers? Thinkful’s data (when normalized for a gender gap at enrollment, more on that later) indicates that graduation rates are almost identical for both women and men:

There is a small difference giving women the slight edge, but it’s within the margin of error given our sample size of just under 1,000 enrolled students.

“Graduation” can be a very coarse way of gauging success, mostly because we set the bar for achieving it much closer to the way most traditional schools define their “honors” programs. In fact, around 20-30% of students (i.e. those that want to build their own projects) don’t care about “graduation” at all. To gauge their success throughout their time with us we currently look at the rate at which students disengage, or withdraw, from our program. 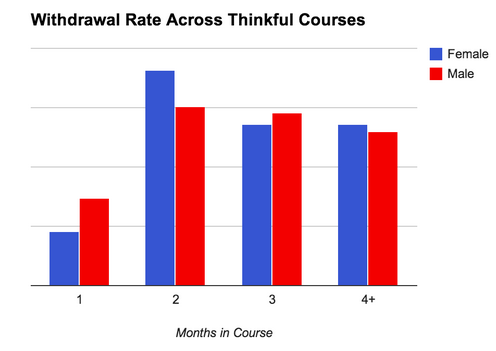 Again, no significant difference. The key takeaway here is that while there are small differences in how much women and men are engaging in our courses the two groups are actually very similar. If anything, across the first two months men and women have the same withdrawal rates with the data showing that women seem to stick it out longer in the first month than men.

Unfortunately, gender equality in student performance does not mean we’re seeing gender equality everywhere. The major disappointing statistic is enrollment: only twenty percent of Thinkful’s students are female, which is in line with female engineers in the workforce. It also seems that the gender ratio of our students is roughly in line with other software schools, most prominently Fred Wilson, Evan Korth and Seung Yu’s Academy For Software Engineering (according to Fred’s blog). There’s enormous room for improvement (and we’d love the help!), especially given that only 30 years ago the ratio was significantly better.

This past summer we tried to see what else we could do. We wondered whether the percentage of women who enrolled were the result of the percentage of women who found us in the first place (“ratio in, ratio out”, so to speak). To find out we tested Facebook ad campaigns targeted only at people who identify on Facebook as women. We purchased 12,000 clicks from this group and measured the percentage that chose to give us their email address after clicking the ad (a “conversion”). For “banner” ads (those little ones on the right side of your feed) women converted at 1.3% versus 3.9% for their male counterparts. For “newsfeed” ads (those that appear in your feed) females converted at 6.5% versus 10.5% for males. Here’s the landing page used for these experiments: 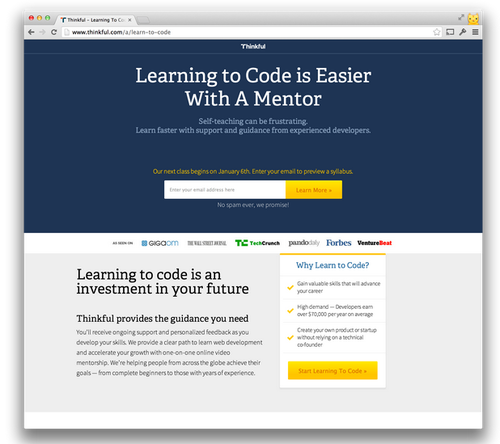 During that period we tested four primary styles of ads, and while we’ve found minor differences in each of their performance, none of them were at all correlated with performance by gender: 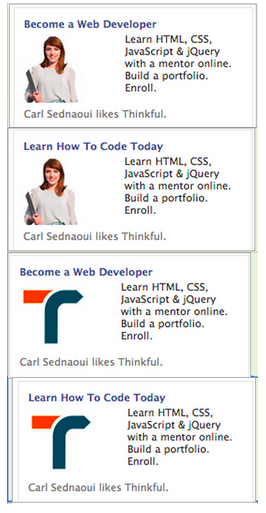 The first question we ask new students is to identify their learning goals. When it comes to gender, the goals of our female students are mostly indistinguishable from those of their male peers. Thinkful appeals to junior and career-aspirational learners, and when we dig into what motivates this group there’s not much that’s male or female about it: 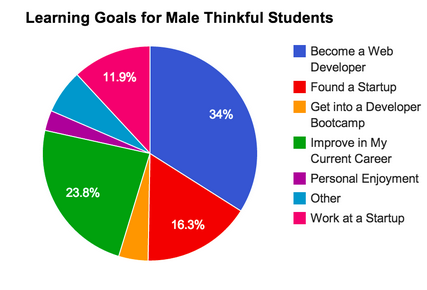 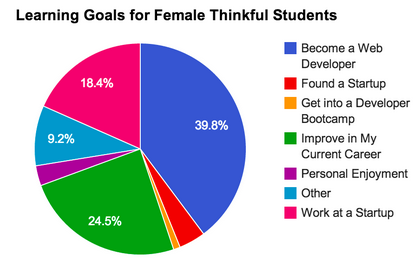 The most notable difference, and it’s relatively small, is that 16% of males want to “Found a Startup” versus only 5% for females. The question is all about the motivation of the student, not the education, but it does lead to an interesting question about whether we’re doing anything to attract or dissuade each gender differently.

Despite complete gender parity in motivations and success rates across Thinkful courses we’re still left with the initial observation that our student body is only 20% women. In 2014 we’ll be taking on a number of projects to improve this.

First and foremost, our mentor team: We now have over 100 mentors working one-on-one with students. Most of them are in the US, but sadly only 8 of them are female. We’re hiring as fast as we can, but as best as we can tell (we don’t know applicants’ gender) we accept female mentors at an equal or better rate than they are represented in our applicant pool. In fact, for iOS Development, our newest course, not a single woman applied to be a mentor.

Second, we’ve barely spent any time on partnerships or sponsorships this past year. But the success in this area from great organizations like Girls Who Code, Women Who Code, Black Girls Code and Girl Develop It indicate that maybe we should start. We did have the opportunity this year to help Barnard’s Athena Center launch Barnard Codes, which is just getting going in January, 2014. We look forward to doing more in the coming year.

Third, our team here in New York City. As we grow to 40 or 50 this year hiring a team that continues to be balanced, diverse and extraordinary will be critical to our success.

Fourth, data. We’re doing a lot of work to better measure the efficacy of our different courses for different types of learners. Today we’re using withdrawal rates as a proxy for engagement, but this approach may introduce its own biases (i.e. maybe men don’t withdraw because they don’t want to admit failure). Internally, we’re moving toward measuring so-called “skills deltas.” It’ll be great when this data is clean enough to make public.

Fifth, our community. When it comes to any of the above we’re hoping to have more voices giving us advice. Please get involved!