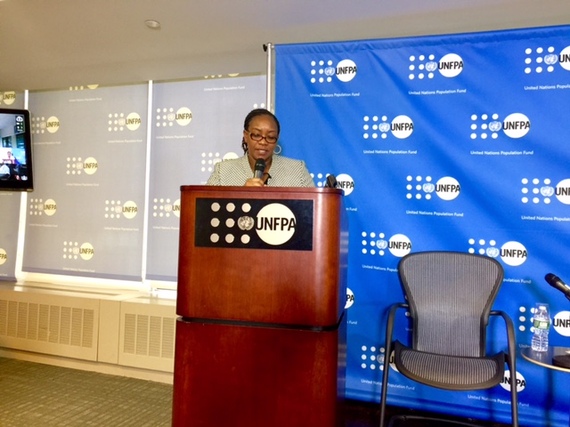 Last month, the Government of Kenya (GoK) in partnership with United Nations Population Fund (UNFPA) at the sidelines of the 60th Session of the UN Commission of Women in New York, launched the report on the 'Assessment of the UNFPA Campaign to End Preventable Maternal and New-born Mortality in support of the Campaign for Accelerated Reduction of Maternal Mortality in Africa'

The assessment report by Deloitte Consulting captures the important strides the country has made to significantly address disparities in advancing maternal and new-born health at all levels.

These findings manifests Government's commitment and determination to address inequalities as envisioned by one of the key principles of Agenda 2030, by ensuring that no one is left behind.

The cornerstone of the Government's commitment is to strengthen the partnerships between GoK, development partners, and other stakeholders nationally, regionally and globally.

This manifested in March 2015, His Excellency, President Uhuru Kenyatta opened a high-level meeting in Nairobi which engaged religious leaders as key partners in fighting against social and cultural drivers that inhibit women's empowerment, many of which contribute to their poor sexual and reproductive health.

That advocacy drive by the Government of Kenya and UNFPA has culminated in an innovative project that is now being implemented in six of the forty seven counties with the highest maternal and child deaths.

The program in Kenya's underserved counties by public and private partners together with UN agencies is a good benchmark in identifying the sub-populations that are not obtaining health care, the reasons for those barriers, and the actions that can be taken to remove them.

The project recognizes that to achieve health equity, gender equality, and fulfil the right to health as guaranteed in the Constitution, it is essential to identify the underlying causes of health inequalities. This calls for a need to look inwards, rather than global indicators. It is only by identifying the disadvantaged or excluded groups, that evidence-based policies, programs and practices can be designed and inequalities tackled effectively.

The focus on 15 counties that bear 98.7% of all maternal deaths in the country was preceded by a survey undertaken by one of Kenya's premier institution of higher learning -University of Nairobi, which revealed the multiple challenges faced by these communities. These challenges include various historical and cultural reasons that disadvantage the most vulnerable, invariably female, poor, rural and thus voiceless and marginalized.

In short, while national averages are important for monitoring overall progress, it is time to realize that these national indicators do not provide the complete picture. One example should suffice: in 2014, the national female genital mutilation prevalence rate in Kenya dropped to 21% from 27% in 2009. However, in the principle of the Sustainable Development Goals (SDGs)- no one can be left behind, focus should remain on the communities where prevalence rate still stands as high as 98%.

The SDGs now emphasize the need for active focus on equity, gender and human rights, specifically Goal 5 on gender equality and Goal 10 on reducing inequality within and among countries and the role of health services in securing national and global peace. There is general consensus that health can serve as a bridge for peace and can have collateral benefits, including nipping in the bud some of the drivers of violent extremism.

It is also apt because some of the counties with high maternal death burden are also prone to internal conflicts, feelings of exclusion and poverty that drive extremism.

Reproductive health complications represent a hideous feedback loop, as they are not only the result of poverty, but also contribute to poverty.

In addressing access to reproductive health matters and gender equality, there is no space for complacency. We are talking about sheer survival not just of the women but of the entire nation. Healthier women mean healthier children and that means thriving societies.

Empowering, educating and employing Kenya's women and girls will launch our economy to new heights and ensure Kenya reaps a demographic dividend. His Excellency, President Uhuru Kenyatta, has stressed that "Progress for women is progress for all ......."

For development to be sustainable and resilient, it must be inclusive and equitable, given that half of humanity are women, their empowerment is a must and not an option.

Sicily K. Kariuki, (Mrs), CBS (@sicilykariuki) is the Cabinet Secretary for Public Service, Youth and Gender Affairs in the Government of Kenya. Siddharth Chatterjee (@sidchat1) is the UNFPA Representative to Kenya.