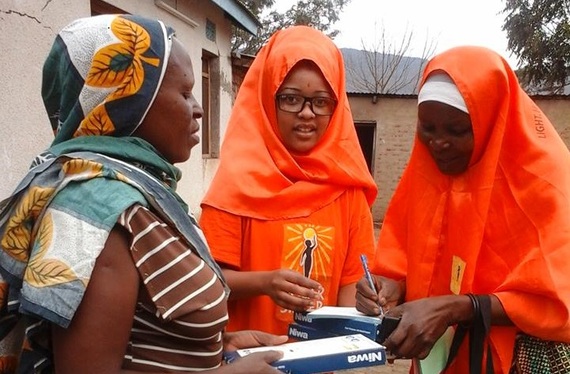 This September, governments at the United Nations General Assembly adopted 17 Sustainable Development Goals (SDGs). Of these 17 goals, one is especially important for girls and women across the globe, and another is focused on energy: SDG 5 is geared to achieving gender equality and empowering all women and girls and SDG 7 is about ensuring access to affordable, reliable, sustainable and modern energy for all. Pursuing these two goals in a coordinated way would tackle the deep gender inequalities that exist in energy access, including renewable energy.

The global Sustainable Energy for All initiative (SE4ALL), led by the United Nations, brings together governments, business and civil society to address access to energy that is clean, healthy and safe in order to achieve sustainable energy for all by 2030. SE4ALL also sets new targets intended to address women's access to clean energy, specifically reducing the number of premature deaths from indoor air pollution and providing modern energy services to healthcare service providers. While these goals are most relevant in developing countries, the topic of gender equality in clean energy is unique in that the challenge is shared across developed and developing countries, and throughout all levels of the energy sector. Considering both gender equality and clean energy in tandem is critical to sustainable development.

In developing countries, women's lack of access to clean energy is particularly staggering to their health and to family livelihoods. Worldwide, approximately 1.3 billion people lack access to basic energy, for cooking, lighting and powering homes. This limits opportunities for education and income generation, and is associated with various health risks. Air pollution is now more deadly than HIV and malaria combined, and most of the victims are women and children exposed to indoor wood fires in developing countries.

In these countries we also know that women play an important role when it comes to clean energy access and innovation -- women are already leading action on advancing clean energy in their communities. When climate-related catastrophes hit, existing gender inequalities mean that women and children are most severely affected by disasters. Decentralized clean energy systems that allow women to create or choose the technologies that work for them, and to fix them quickly when the lights go out, are key tools for climate change resilience.

In three African countries, Solar Sister is tackling energy poverty and women's empowerment simultaneously through providing a social enterprise opportunity for women entrepreneurs. Through Solar Sister, over 1200 women entrepreneurs have reached 200,000 people. One such entrepreneur, Levina from Tanzania, shows how having the opportunity to buy just one solar lamp has allowed her to grow her business and continue to reinvest in purchasing more lights to fuel the growth of her business.

But gender inequalities in clean energy are not limited to developing countries, and the extraordinary pace of growth of the clean energy economy means that there is much at stake in the developed world. Renewable technologies represented about 59 percent of net additions to global power capacity in 2014, and made up about 27.7 percent of the world's power generating capacity. The country leading investment in renewable energy power and fuels (excluding hydropower above 50 Megawatts) is China, followed by the United States, Japan, the United Kingdom and Germany. In China, investment in new renewable energy capacity has surpassed investment in fossil fuel and nuclear power combined and the country has the largest global share of the clean energy workforce.

The intersection of gender equity and clean energy is a new frontier in developed countries and emerging economies. With new frontiers come new challenges, one of them being that the fast-growing energy sector is one of the most gender imbalanced industries. Similar to developing countries, women are not playing an active role in the clean energy future. In the energy industry as a whole, women make up only 6 percent of technical staff, 4 percent of decision-making positions and 1 percent of top management. In clean energy, women workers make up 20-25 percent of workers in industrialized countries, and the majority of these women are in administrative and public relations positions rather than playing a technical or decision making role. About 61 percent of U.S. energy companies have no female representation on their board of directors. Beyond the workforce challenges, inequalities in clean energy access are also present in developed countries, as communities with limited resources have not been able to invest in renewable energy technologies such as solar panels and have been largely left behind.

While the energy sector is lagging in women's active participation, other sectors recognize that investing in women is a formula for concrete environmental and economic gains. Companies with more women on their board are more likely to proactively invest in renewable power generation, and the number of women serving in a country's parliament can determine whether that country reduces greenhouse gas emissions. When women have the same opportunity as men to participate in the workforce, countries benefit economically, with Japan being a prime example. In the U.S., Fortune 500 companies with the highest representation of women on their boards (19 to 44 percent women) were found to enjoy 16 percent higher net income as a percentage of revenue than companies with no women on their boards.

The gender inequalities that persist throughout the energy sector inspired the creation of the Renewable Equity Project (REP), a new initiative building knowledge and action on women's advancement throughout the energy value chain -- from engineering and technology to the boardrooms of energy corporations. Housed at the Center for International Environment and Resource Policy (CIERP) at the Fletcher School of Law and Diplomacy at Tufts University, the initiative is the first effort to improve gender data across clean energy technologies and to demonstrate the impact that women's advancement could have on expanding the clean energy economy.

Gender equality, whether in developing or developed countries, should be viewed as a climate-smart innovation. If women were to play an equal role in clean energy across the globe, the adoption of clean energy could be accelerated to combat climate change while improving energy access. But if women continue to be left out, gender inequalities will likely persist or could even be deepened. Let's hope that initiatives such as the Sustainable Development Goals and Sustainable Energy for All are successful in positioning women's empowerment as a primary solution.

Rebecca Pearl-Martinez co-authored this post. Rebecca is a Research Fellow and Head of the Renewable Equity Project in the Center for International Environment and Resource Policy (CIERP) at the Fletcher School of Law and Diplomacy at Tufts University.