The fight for gender equality can feel a bit bleak at times, but new research offers some encouraging information about the attitudes of most Americans.

Drawing from data collected by the General Social Survey, the Council On Contemporary Families has tracked public support of gender equality for the past 37 years. Other than a slight dip in the late 1990s, Americans' attitudes towards progressive gender roles for women and men have steadily improved -- and are continuing to make headway.

The General Social Survey, known for taking "the pulse of America," has posed these four questions about gender roles in the family and workplace to American adults since 1977: 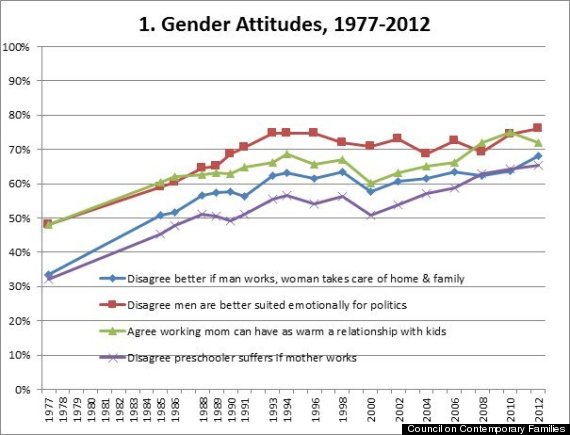 In a report for the Council On Contemporary Families, researchers found that 65 percent of the people surveyed currently do not agree with the idea that preschool children suffer when their mother is not a stay-at-home mom, compared to 68 percent of respondents who did believe young children suffered when a mother worked outside of the home in 1977.

These numbers suggest that the number of Americans who believe mothers can work outside of the home without it negatively impacting their children has doubled since 1977.

The percentage of Americans who believe that women and men are "equally suited to politics" has jumped from 48 percent in 1977 to 76 percent in 2012.

Other than the low point from 1996 to 2000, Americans' support for progressive gender roles has increased consistently across the board.

Percentage increases tell us how much the general population has evolved on specific gender issues, but the survey also determined how specific segments of the population have evolved on gender equality. Based on their answers to the four gender-related survey questions, individuals fell somewhere along a four-point scale. The closer to four, the greater their support for progressive gender roles.

When this scale is applied to the general population, Americans on average answered 1.5 questions in support of progressive gender roles in 1977 and 2.8 in 2012. 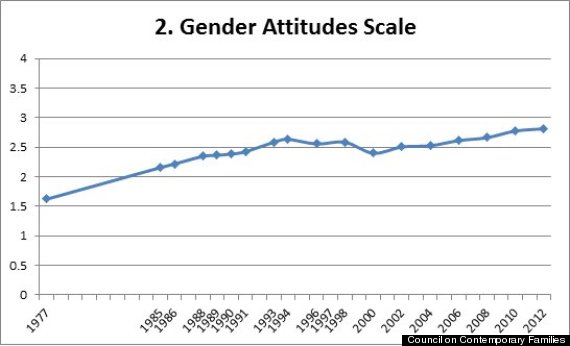 Women have always tended to be slightly more progressive than men when it comes to gender roles, but their overall attitudes have evolved at essentially the same rate. 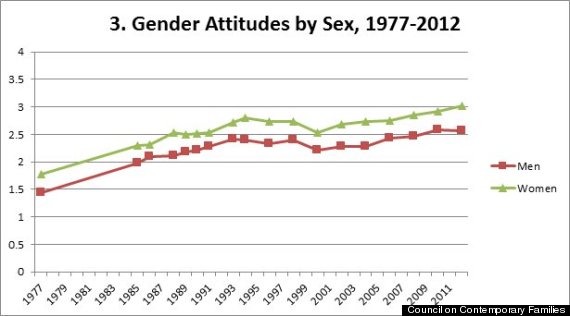 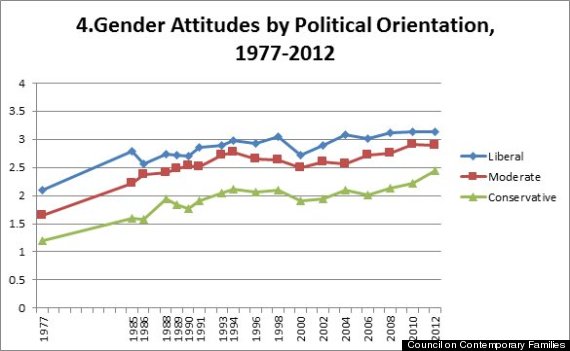 Higher education levels correspond with greater support for progressive gender roles. Erratic peaks and valleys throughout the '90s are especially pronounced among the college-educated, but the attitudes of people of all education levels have followed a similar upward trajectory with one exception: In recent years, the opinion of those with less than a high school education on gender equality has actually gone down. 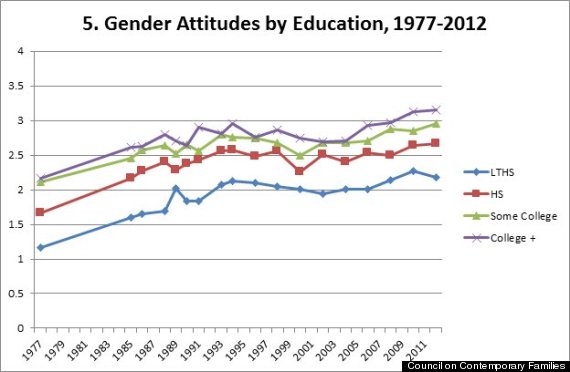 Looking at the data by generation, each age group generally supports gender equality more than the generation before them. But as the population gets younger, differences in attitude narrow. For example, a millennial probably has a lot more in common with her parents, than her parents had in common with their parents. 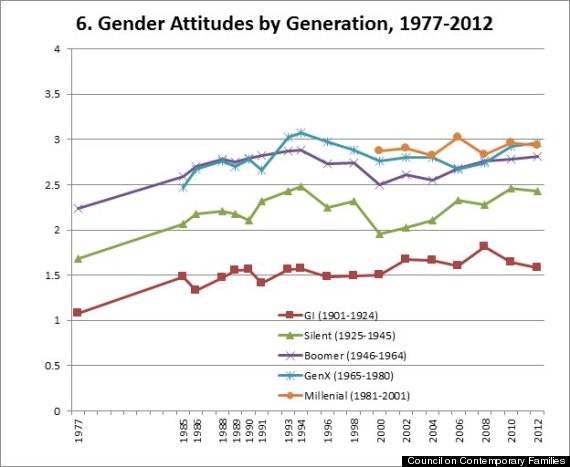 Across all demographics and categories, support for progressive gender roles has increased steadily since 1977. Despite the "stalled revolution" of the late 1990s, support for gender equity has rebounded since 2006.

So, how'd Americans get back on on track? Feministing's Executive Director Maya Dusenbery credited not all, but at least some of this amazing improvement "to the emergence of the feminist blogosphere."

This actually makes a lot of sense when you look at who was concluded to be the driving force behind positive attitudes about gender equality: millennials. "The main force pulling the overall average up beyond its earlier high point is the entry of the Millennial generation, which displays the most gender egalitarian attitudes of all," the Council On Contemporary Families researchers explained in their reported published July 30. Pretty sure we can finally say "Millennials FTW" on this one.