A stunning new pop-art project aims to portray a world in which women decision-makers vastly outnumber their male counterparts.

Take a look at the mural below, then scroll down to keep reading: 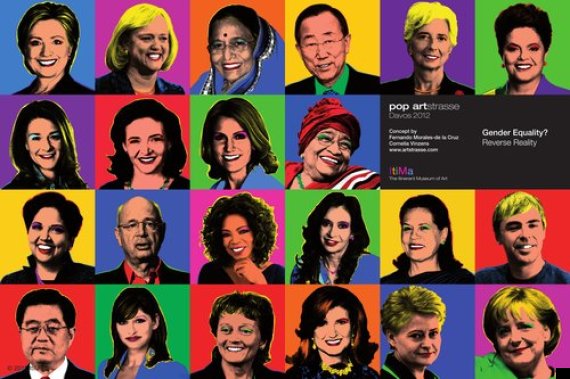 The poster, designed by Fernando Morales-de la Cruz and Cornelia Vinzens of the Itinerant Museum of Art, aims to "communicate a sense of urgency to all decision makers, the global media and the general public" about the barriers that many women still face in the professional and political spheres around the world.

"In January 2011 the WEF announced that at least one on five participants would be female, Morales-de la Cruz noted in an email. "Today they are far away from that promise."

The release of the mural is timed to coincide with the World Economic Forum's 2013 annual meeting, which began Jan. 23 in Switzerland. It will soon be presented at transportation hubs and on buildings in major cities around the world.

To read more about the "Gender Equality? Reverse Reality" mural, check it out on Facebook here.