Women are paid less than men in their first jobs out of college -- 5 percent less, according to the American Association of University Women -- but new data from Payscale.com, a website that collects compensation data shows that the gender wage gap dramatically expands over the course of employees' careers. 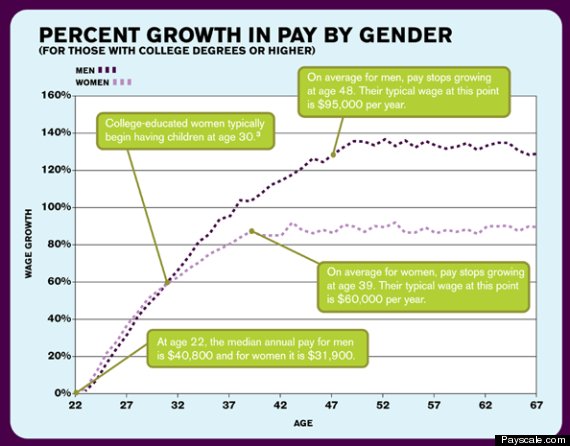 However, the Payscale findings weren't all dire. For one thing, they indicated that between ages 22 and 30, the rate of women's salary increases briefly surpasses that of men, Catherine Rampell reported in the New York Times' Economix blog.

This data -- along with the results of an often cited 2010 study showing that single women under 30 outearned their male peers by 8 to 20 percent in certain urban areas -- seems to corroborate claims made by high-profile researchers and authors that women are poised to surpass men. Liza Mundy, author of "The Richer Sex: How the New Majority of Female Breadwinners Is Transforming Sex, Love and Family" wrote in a recent TIME cover story based on the book,

Assuming present trends continue, by the next generation, more families will be supported by women than by men... In 2009, the most recent year for which U.S. Bureau of Labor Statistics figures are available, nearly 4 in 10 working wives outearned their husbands -- an increase of more than 50% from 20 years before.

And journalist Hanna Rosin, whose forthcoming book "The End Of Men" is based on her 2010 Atlantic article of the same title, wrote in that piece,

Yes, the U.S. still has a wage gap, one that can be convincingly explained -- at least in part -- by discrimination. Yes, women still do most of the child care. And yes, the upper reaches of society are still dominated by men. But given the power of the forces pushing at the economy, this setup feels like the last gasp of a dying age rather than the permanent establishment.

The Payscale data also indicated that while the gender gap endures across all professions averaged together, it is as low as 1 to 4 percent within some fields -- Payscale cited software development, nursing and human resources as examples -- much lower than the frequently referenced 12 to 13 percent difference across all jobs. 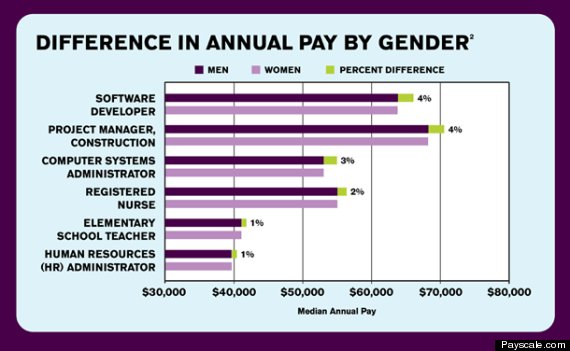 The Payscale findings aren't comprehensive, though, argued Catherine Hill, research director of the American Association of University Women, on Today. They aren't based on the entire population, only on Payscale.com user profiles, and when you correct for job choice, GPA, alma mater, children, time off of work, and other factors, women's pay is still 12 percent lower than men's 10 years into their careers.

On Tuesday the Senate is expected to vote on the Paycheck Fairness Act, which, according to the Christian Science Monitor, would offer several additional protections for women in the workplace, including increased ability to pursue punitive damages for unequal pay claims; prohibit employers from retaliating against employees who inquire about payment practices or who disclose their own salaries; and require businesses to prove that differences in pay between genders were rooted in business requirements." On Monday, President Obama joined a press call to urge senators to pass the bill.

Women currently make up nearly 50 percent of the workforce, according to an April 2012 report issued by the White House Council on Women and Girls.